Alex was "solid" as Black. Brian didn't like the way his game was going but was able to force a repetition. Sam thinks he played a series of poor moves including "the worst of my life". I got nothing from the opening, should have drawn but made too many inaccuracies.

We are seeded 32 out of 40 teams. The tournament will be decided by match points, not game points. Amongst the rules is one that states players are allowed to be instructed to resign by their team captain. The only circumstances we can think of under which this might happen is some kind of "deal", in which case there are regulations about how to fix a match!

Last night there was a U2 concert in a football stadium just round the block from the hotel. We didn't get in but the acoustics were good enough to just stand outside and listen, along with hundreds of locals who had the same idea.

A depressing day for the team so we consoled ourselves in a downtown bar in the evening and my team mates were gracious enough not to disown me after I ordered a double cherry brandy (in contrast to their more macho pints of Carlsberg). However, when they also learnt I drive a Nissan Micra they began to have serious doubts.

Scotland had a reasonable result today, losing only 3-1 to Ukraine by managing draws on the top two boards. Colin McNab "swindled" Ivanchuk: how cool is that! Despite this loss, next round Scotland are paired against Russia (who lost to France today).

At last, our first win! Alex won what I thought was a lovely game but he modestly denied this, claiming his opponent's Bxc6 was a big mistake. Brian just managed to hold on, later regretting his choice of opening variation (it made it too easy for him to "have a go at me"). Sam bamboozled his opponent with some clever manoeuvering and I couldn't capitalise on an extra pawn with opposite coloured bishops.

The Scots couldn't repeat their good performance against Ukraine, losing 4-0 to Russia.

The "battle of Middle Earth" (Sam's opponent was called Frode!) ended in a draw though it looked like Sam had all the chances. Alex played something from his youth which he thought would be a surprise only to find his opponent was well prepared (you can't hide from chessbase!). I failed to get enough play for a sacrificed pawn or hold the ensuing endgame. Not sure what happened in Brian's game and I won't find out till later as the party has just started and there are free drinks.

Captain Alex devised the following system for allocating free drink tickets: one each for youngsters (Sam), oldies (Mark) and skinny people (Brain) and the remainder to be divided between the rest of the team!

Not a bad result. Sam's game was the last to finish and he was delighted with his win. Russia lost their second match, this time to the Netherlands, and there was much joy amongst the young Azerbaijan team when they finished winners over Ukraine. After 6 rounds, Israel are leading with Netherlands second. Ireland are in 32nd place (our seeding).

Brian and Sam's games were both hard fought draws. Alex always seemed to have pressure. I didn't manage to equalise.

The top matches saw a win for the Netherlands (over Azerbaijan), and they now join Israel in join first place (who could only draw with Poland). France beat Armenia to stay in the hunt, but Russia and Ukraine both lost (to Georgia and Hungary respectively) and are both out of contention.

It was a long wait but both Brian and I scored our first wins (wheeee!). Sam followed a recommendation from his own book (An Attacking Repetoire for White) in the 2.c3 Sicilian but was outplayed and is planning revisions!

The leaders all slipped up: Israel lost to Georgia, Netherlands drew with Greece and France lost to Poland. This leaves Netherlands, with an extra match point, as favourites, with Israel, Georgia and Poland in joint second place. Wales beat Scotland to complete a miserable run for the Scots since the heady days when they were playing Ukraine and Russia in successive rounds.

I thought we were going to do our usual - good result in the penultimate round and then hold a good team in the last to finish respectably - but instead we got creamed. Alex drifted in to a passive endgame, Brian blundered, Sam got hit by a powerful theoretical novelty and I was ground down in an endgame. Brian says to save time I should just write "WE SUCK". At least the Scots suck more than we do.

Netherlands beat Poland to win the tournament. Israel were clear second after a win against Czech Republic and France got the bronze after beating Serbia, edging out Greece on tie break who won against Georgia. Poland and Greece both did well and the Poles also won the women's competition from Gerogia and Russia. Gold medal on board one went to Peter Heine Nielsen of Denmark. 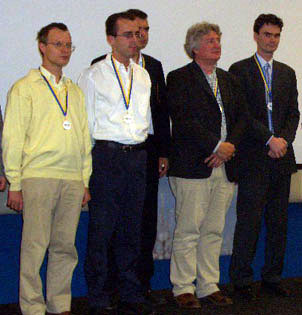 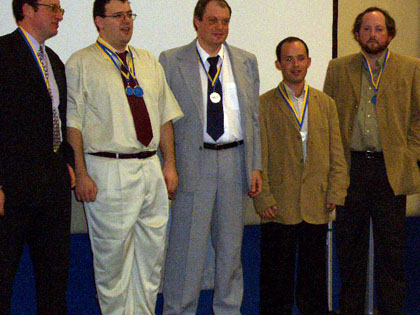 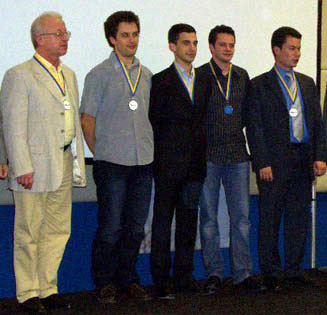 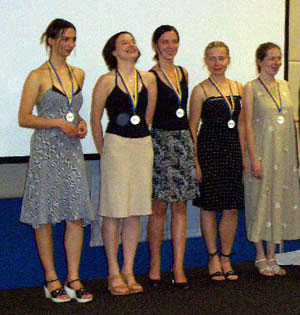 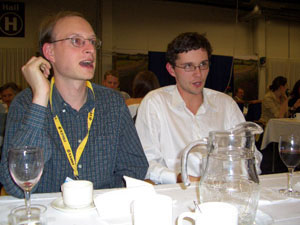