Have you ever had the experience of being mistaken for somebody else by a complete stranger or greeting somebody familiar to you only to discover that the person involved is actually a stranger who bears an uncanny resemblance to one of your friends or acquaintances?

I had the latter experience a few years back when I thought I was purchasing flooring material from fellow chess player Martin Creighton only to discover that the retailer simply bore an extraordinary resemblance to Martin. On being advised of this fact the man involved indicated that on a couple of previous occasions he had been greeted by passers by in the street who had called him "Martin". Now he knew why!

Here in Khanty Mansiysk, with well over 2000 people from all across the globe gathered in one place, I have been struck by the extraordinary number of "lookalikes" present.

Having now seen world number 1 Magnus Carlson in the flesh I can confirm that he does in fact bear a passing resemblance to the American actor Matt Damon!

But it doesn't end there! I have therefore drawn up a list of lookalikes at the Olympiad.

Firstly, however, it would be important to start nearer to home and acknowledge the truly extraordinary resemblance between Yuri Rochev FM and Taoiseach Brian Cowen. I wonder, in the light of recent events, if Yuri can perform a cabaret act as good as the Taoiseach's recent outing at the Fianna Fail "think-in" in Galway. If he is playing in the Galway Congress next weekend maybe Yuri can be persuaded to emulate the Taoiseach's efforts at providing late night entertainment by the tournament organisers!

Turning back to the Olympiad, the following lookalikes have been noted: 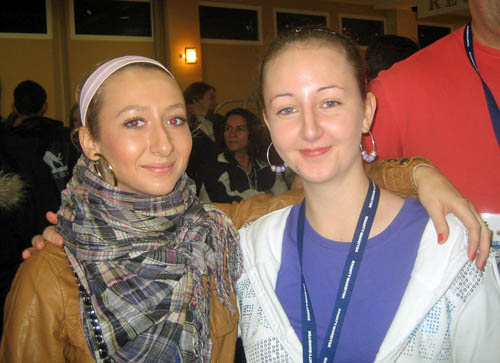 I wonder if any members of the Irish Party other than Sam also have doppelgangers and have other people here mistaken any of us for them? We will await developments with interest!