When this years Kilkenny Chess Congress got under way in Butler House and the Club House Hotel in Kilkenny, few were expecting the Masters event to be as strong as it was, an incredible 7 grandmasters from 5 different countries were joined by 3 Irish international masters and a host of other strong players to compete for the coveted Kilkenny Masters title, not to mention the honorary Kilkenny Jumper. Rumour has it that the only way to prise one of these precious garments out of Jack Lowrys hands these days is to make a donation that would embarrass the IMF!!

It was interesting to note that the clash on board 9, Thomas Hauptmann vs Mark Heidenfeld deserved the best dressed prize as both players were sporting their official Kilkenny jumpers, nice touch lads.

There were no real surprises in round 1, the only seed not to win at the first hurdle was our own Mark Quinn who was held to a draw by an injured Darren McCabe. Darren appeared with his left leg in a cast, which had nothing to do with the first hurdle, his Friday night excuse was that he was the victim of an unfortunate accident on a bouncy castle but this explanation was to change form day to day during the event! Vospernik allowed a back ranker against Jones.

The second round did produce a few surprises, Olympiad debutant David Fitzsimons (pictured below) beat Alex Baburin with Black on board 5 while a surprise in the form of our own Irish Champion, Alex Lopez, lay in wait for Ivan Cheparinov on board 1, Alex claimed a famous ½ point against Topolovs second. 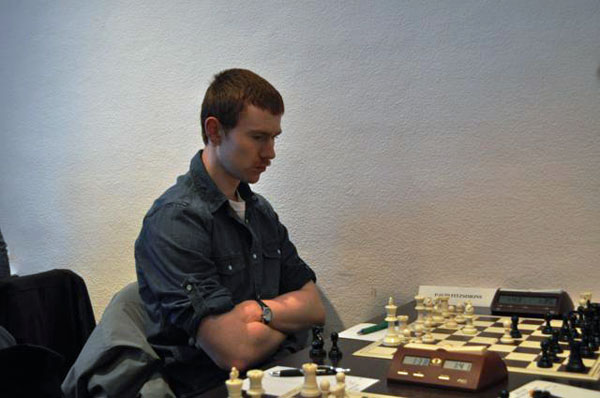 Top board for round 3 was an all French affair, Fabien Libiszewski vs Sebastien Maze, and the French friends certainly didnt come to draw, the in-form Maze (pictured below) winning a tactical battle. Mark Hebden beat Mahai Suba while Gawain Jones and Alex Lopez beat Irish IMs Mark Quinn and Heidenfeld respectively while Fitzsimons lost to Cheparinov. 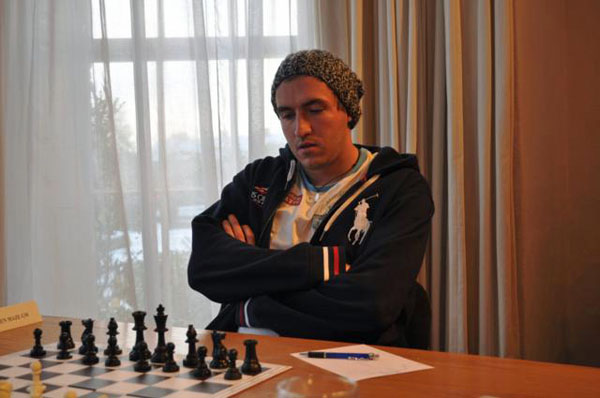 By the start of the 4th round, there were only 2 players on 3/3, Sebastian Maze and Mark Hebden so this encounter was watched for most of the game by quite a contingent of spectators. Sebastian had done his preparation well for this game and it paid off. Sam Collins was playing the other French grandmaster and he did quite a bit better than Mark Hebden (pictured below). 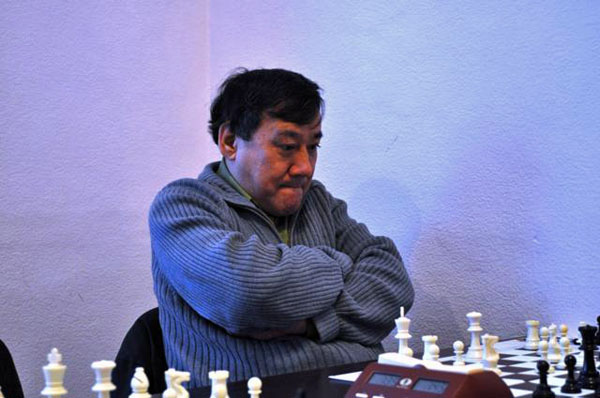 The top of the Masters leader board at the end of round 4 looked like this:

Gawain Jones managed to squeeze a win in a tight time scramble after a tough game in which, if there was a slight advantage for either player, it seemed to change a few times! Chaperinov managed to win with Black against Hebden and Suba claimed the full point in his game against Alex Lopez who arrived 45 minutes late for the game due to an alarm clock malfunction. Sam Collins emerged victorious against fellow Irish IM Mark Quinn to join 4 other players, all on 4 points, going in to the final round. Local junior Ryan-Rhys Griffiths also managed to hold Alex Baburin to a draw with a fine performance on board 6. This left the final pairings looking like this:

This was shaping up to be an exciting finish and it seemed the spectators knew this too as the playing hall for this round was pretty full. Ivan Cheparinov (pictured below right) won fairly quickly on board 1 to set the bar at 5/6, a bar which Sam Collins met with a fine win over Gawain Jones. This is Sams second year in a row ending up on top of the Kilkenny Masters, something agrees with the young man from Dun Laoghaire when hes at Jack Lowrys event! Fabien Libiszewski managed to overcome Mihia Suba in a tight endgame to end up on 4, a score that was to be equalled 4 other players. 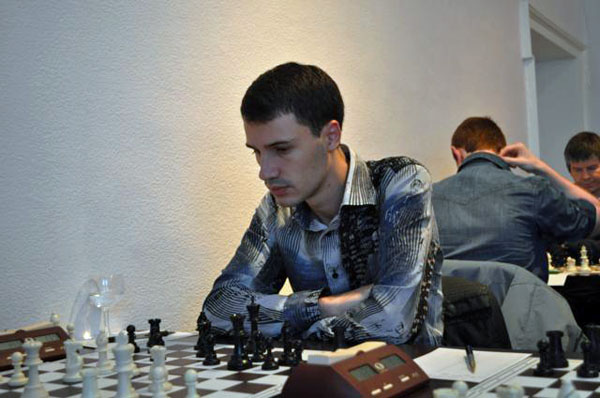 I dont normally give a game from the Major but I couldnt resist this slug-fest between Mark Collins and Semyon Mkytchyon, it has a pretty finish!