The Bunratty Chess Festival 2011 was held over the weekend of February 25th to 27th in the Bunratty Castle Hotel, Co. Clare. This event was sponsored by Blackthorn Transport of Heathrow in London. This is Gary OGradys company, and many thanks to Gary, without whom the Bunratty Chess Festival would not be what it is today. As well as being a financial supporter, Gary holds the second best attendance record of any player, he has competed in 16 of the 17 previous Festivals, a record beaten only by Paul Kiely of Waterford who has yet to miss one!

A total of 255 players competed for the four titles at stake, 103 in the Minor, 56 in the Major, 63 in the Challengers and 33 in the Masters. Top seed was the former world championship candidate Nigel Short, fresh from two successful simultaneous displays, one in Dublin and the other in Cork. While he did concede a few draws, Nigel ( pictured right ) kept his fine record in simuls unblemished. We had four other grandmasters playing, Tony Kosten ( France ), the Ginger GM, Simon Williams, Gawain Jones ( both England ) and Irelands own Alexander Baburin. The international masters were there in force to compete also and they included Sam Collins, Mark Heidenfeld, ( Ireland ) as well as Malcolm Pein, Adam Hunt and Lawrence Cooper ( England )

The first round clashes began at 8:00pm with Corkman Kieran Moynihan having the honour of facing Nigel Short, here is the game.

There were no upsets in the first round, apart from a few draws on the lower boards, all the seeds came through smiling. However, the titled players were starting to meet by the second round, when, if the results alone are to be believed, peace broke out at Bunratty. The top five boards were all drawn but they were all long, hard fought draws. Indeed, Adam Hunt vs Nigel Short were close to 80 moves before they shared the point.

In round 3, Nigel Short beat Sam Collins on board 1 in a game that lasted 68 moves this time, Shorts games were anything but short ! ( Sorry ) The last round on Saturday saw some of the most exciting chess Ive seen in a long time, have a look at the game;

If that wasnt exciting enough for you, have a look at Gawain Jones vs Nigel Shorts game from round 4

Nigel would certainly not be used to playing 3 tough games in one day and after a tough schedule of simuls recently, maybe the fatigue was starting to show but that shouldnt detract from a fine showing by young Gawain Jones. ;

Nigel was again in trouble in his Sunday morning game against David Fitzsimons of Elm Mount but David failed to find a win against his illustrious opponent and the point was shared. The final round pairings looked like this;

On board 4, Nigel beat Philip Short ( see how I managed to resist the many bad puns available for this encounter ) while on board 3, Ryan Rhys Griffiths managed to beat Malcolm Pein, a great performance by the young Kilkennyman.

Pictured left are the top 3 boards in action during the final round .

Board 2 was a bit of a disaster for Adam Hunt, he went wrong in a drawn ending in time pressure and lost to Tony Kosten but the game of the event has to be Gawain Jones first win against Alex Baburin, and what a time to score it. game.

Congratulations to Gawain on a great performance but also to Ryan Rhys Griffiths for a joint 2nd  3rd place and to David Fitzsimons for the best non-titled Irish player award.

The winner of the Challengers event was Gonzagas Cormac OBrien ( pictured right )on 6 out of 6 ! This was a fantastic performance from the 33rd seed and it means that, irrespective of rating, Cormac can play in next years Bunratty Masters if he wishes. 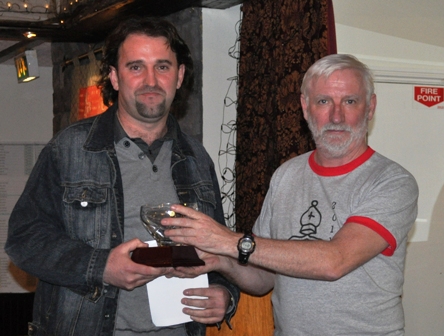 The Major event was won by Ljubisa Cirkovic who plays with Ennis but is from Croatia. He was the 16th seed and he won the event on 5.5 / 6.

The Minor event was won by Darren Rice of Castlebar ( pictured right ) again with a perfect score of 6 out of 6.

The traditional Blitz event was the highlight of Sunday evening and was well attended. As this event was attended by all 5 Shorts, Nigel decided to blend in a bit with his other 4 namesakes, the kiblitzer in this game is non-other than Nigel, !

But the winner of the Blitz was Mark Heidenfeld who needed 3 tries to beat Gawain Jones in closely contested final, his prize for this remarkable achievement, our hearty congratulations ! The fact that Gawain didnt win the Blitz allowed Peter Svidler to retain the honour of being the only player to win both the Masters and the Blitz at the same event !