The Cork Congress was held in the Gresham Metropole Hotel on 1st-3rd April. There were a total of 126 players, 46 in the Masters, 32 in the Majors and 48 in the Minors. The Finbarr Allison Masters Section was kindly sponsored by Cork City Council, in memory of Finbarr Allision, the local CCYMS player who also worked for the Council. Three Grandmasters, Simon Williams, Alex Baburin and Bogdan Lalic and three International Masters, Sam Collins, Mark Quinn and the present Irish Champion, Alex Lopez, were in the mix, along with Fide Masters Colm Daly and Philip Short.

The first round clashes began at 8 pm with local lad Tom Healy kicking off against the top seed, Simon Williams. There were no upsets for the titled players in the first round. In the second round games on the Saturday morning, the Cork Chess Club player Henk de Jonge got the first upset of the tournament with a draw with Colm Daly (see Colm's website for more details,

In the third round the titled players began to meet, with the point shared between the Alex Lopez and Alex Baburin, and also between Bodgan Lalic and Philip Short, although there were wins for Simon Williams over Mark Quinn and Sam Collins and beat John Joyce. Mark was at one stage a piece to the good against Simon, but unfortunately gave it back. More details can be found at SImon's website

Thus, only two players were left on maximum points going into the evening and in round 4 the point was shared on the top board. Alex Lopez beat Philip Short to join the leaders on 3.5 points, with Bogdan Lalic, Mark Quinn and Alex Baburin just a half point behind going into the Sunday morning. The fifth round saw Simon Williams defeat Alex Baburin and Alex Lopez beat Sam Collins, ( Alex has annotated this game for us ) for them to both move to 4.5 points, half a point clear of Mark Quinn and Bogdan Lalic. In the final round a draw on Board two between Mark and Bogdan, meant that the point was soon shared on the top board too. In Cork we have a blitz play-off to decide the winner, and so, with honours even after the first two games, Simon triumphed in the third game to take the title. Congratulations to Simon on his first win in de real capital. 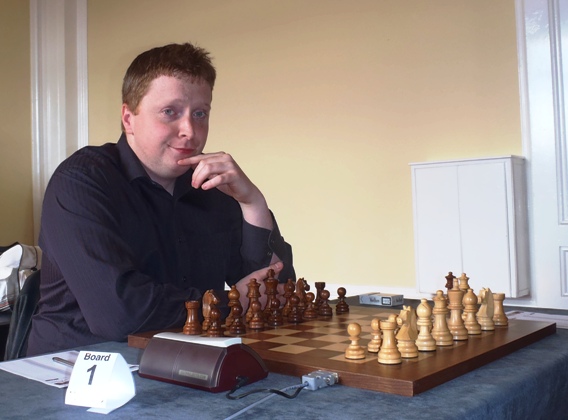 In the Major, the eighth seed Liam Murphy from Adare took the honours, with 5.5 from 6.

The Minors was also won by the eighth seed, Craig Gill from Cork, again with 5.5 from 6, having defeated his son Angus in the 5th round. They're still talking to each other!

Grading prizes went to Bartlomiej Cichonski, Simon Lawrence, Ray Woodhouse, Ben Cullen and Krzysztof Przestrzelski, with the prize for the best rating performance going to Eoin Minnock, whose performance was a staggering 330 points above his rating in the Masters! Definitely one to watch for in the future.