This article part of the series: Alexander Baburin - 1, 2 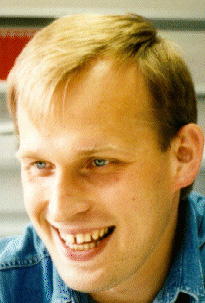 I was born in 1967 in Nizhniy Novgorod (then Gorky), a big city (maybe the third largest in Russia) about 300 miles east of Moscow. I come from a working-class background. My mother came from the country side; her grandparents were kulaks. My father taught me to play chess when I was 7 or so. He's not a strong player, and thinks he's much better than he really is (don't we all?!). My mother greatly (but quietly) supported my passion for chess.

When I was 8 a woman named Ideya Blagonadezhnaya came to our school. She started something like a chess club and was my coach for many years. Her husband, IM Oleg Chernikov, also helped me a lot. I must have spent hundreds of hours working with them and still stay in close contact with both of them. Later I attended a school of GM Alexander Panchenko for two years, whom I respect a lot as a coach.

Before I started to play chess I took swimming very seriously, then at some point I played basketball a lot, so I was always involved in physical sports. The choice between chess and basketball was rather difficult, but I felt that I had greater potential in chess. Besides, I had some minor problems with my heart, so my basketball coach recommended that I play it just for fun. I think it was good advice so I have a lot of respect for him!

From IM to GM

I became an IM in 1990, at age 23. At the end of 1991 I played my first GM-tournament and got a norm straight away, tying for first with GM Lutz in a strong event in Hungary. I thought the rest would be plain sailing but little did I know. Two months later, again in Hungary, I missed a norm (which would have been the final one) by half of point, failing to win in the last round. Other norm chances came and went. I became one of the highest rated IMs in the world (with a 2550-rating) but also one of the most frustrated. However, since I was playing so well (modesty!), I thought I might as well continue to play in opens and make some money and hopefully the norms would follow. Well, I made some money, winning two opens in Switzerland in 1992 with 7.5 out of 9 in both, but could not get another norm till the end of 1995! Then things improved and I scored above a GM-norm in Copenhagen 1996 and obtained the title in Yerevan the same year.

My best tournament result (up to March 1999) was in the Isle of Man Open in 1997, when I scored 8 out of 9, and a 2827 performance rating. The highest my rating has been is 2600 (January 1988). The most famous player I've ever beaten is Viktor Korchnoi, Copenhagen 1996. I am quite realistic about my chess career. I would be happy to be among the top 50 in the world and stay in that group as long as possible. I feel that I have a few hidden resources and that not all my potential has been spent yet.

In 1993 I met Eamon Keogh in a tournament in France. Then I played in some Irish tournaments and towards the end of the year moved with my family to Dublin. For the subsequent year in Ireland Eamon, and also Michael Crowe, helped me a lot.

Part of the reason for moving to Ireland was that I wanted to see different countries and to travel more. I believe that we are born on this planet and belong to it: national and racial differences should not prevent people from exploring the whole world! For this I have just the right profession! When my wife Elena, my son Ivan (then only 3) and I were moving to Ireland, I said to my wife that my main goal was to learn about Western culture and to learn English; it was not for financial reasons. It has worked out well - I am very glad that I made that move: I learned a lot and I like the country where I am living now.

My style is closer to that of Karpov, rather than to Kasparov. I admire many players, certainly all leading players and former champions. I like Karpov's style because I try to play in a similar fashion; I admire Shirov's games, because I cannot play like this!

During a game of chess I get lots of emotions, for example: curiosity - what is my opponent going to play; sometimes admiration - when he plays a great move or comes up with an interesting idea; sometimes I get proud of my own ideas, sometimes I laugh at my opponent's plans; sometimes I get angry! You can hardly be bored, while playing chess!

Talking about anger, I remember a game I played in Dublin in 1995 against Mark Quinn. Mark had three pawns for the exchange and I was in serious time trouble. At some point I saw Mark talking to some other players and laughing (after the game he said they were sharing a joke). This made me very angry (with myself). I told myself that I DO NOT WANT to lose this game. I won it. Had I not given myself that emotional kick, I would certainly have lost that game.

Of course, not every game can be turned like this. Some young Russian chess star (I think it was Rublevsky) joked in a recent interview that when we win, it shows our class, when we lose, it shows how unlucky we are! Well, I believe all players tend to think this way to a certain degree, but I am actually very sensitive to my loses. I used to get absolutely crazy (well, at least inside!). Now I am more mature. I don't blame circumstances, but try to understand the reasons why I lost. I like this about chess - when you lose, you are the only one to blame! 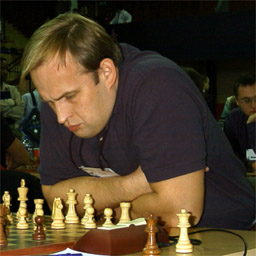 I don't fear stronger opponents. Sometimes I get so interested in the game that I almost forget against whom I am playing. I like such moments a lot, no matter what the out-come is. Playing against weaker players, I sometimes get too relaxed, although I generally try to concentrate hard against any opponent. This is my relatively weak point and the one I am trying to get rid of. Not all loses or draws against weaker players are due to this feature, of course. Sometimes your opponent just plays better than you and you lose.

The Life of a Professional Player

There are some great advantages to being a professional chess player: you get to travel a lot, to see different countries and meet many people. There is en element of creativity in chess and related to this satisfaction. You basically do what you like to do and sometimes you even earn some money doing this! These are the positive sides. Among the negative sides I would mention that it VERY hard to make decent living just by playing chess - not too many players can do so. Well, you can teach - give lessons and lectures, but not all payers like that (I do, by the way!). It's hard for me to play as many tournaments as I want, because I have a family, so I don't play often enough. Prize money is not guaranteed and usually it is, alas, not very much. It's definitely a lot easier to be a chess professional for a single person, maybe this is why many players are not married.