The annual Kilkenny Congress got underway, running from Friday November 23rd to 25th in the Club House Hotel and Butler House in Kilkenny City Centre. Although the numbers in the Masters event was down on previous years, the overall number of players in the four events remained at about 200. 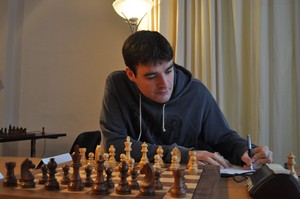 Top seed in the Masters was Gawain Jones, ( pictured left ) who will compete against some of the worlds best players next week in the London Classic. With a FIDE rating of 2644 and playing some really exciting chess recently, Im sure hell acquit himself very well against this hugely strong field of super GMs. Second seed, Mark Hebden, a regular visitor to Kilkenny, arrived without his famous Kilkenny Jumper, apparently the victim of a washing machine incident, Jack Lowry was not impressed!

Our Alexander Baburin was the third seed while fourth was English GM, Keith Arkell ( below right ) making his Kilkenny debut. These days I think you have to win the event to get a jumper so Keith has his work cut out for him to get one.

The first round went mostly to seeding, with a few draws being scored by the lower rated players, Hugh Doyle ( Cork ) drew with David Murray, Thomas Hauptmann ( Netherlands ) drew with Anthony Fox while Kieran ORiordan and Eamon Keogh also shared the point. Probably the highlight of this round was Keith Arkells attractive game against David Path, Keith had to do some work calculating a few more variations than hes used to doing in his average game.

Round two had quite a high percentage of drawn games but almost all of them went at least 3 hours, fighting chess indeed. The exception to this was a quick cessation of hostilities on board two when Keith Arkell and Sam Collins drew in 10 quick moves. Maybe the exertions of last nights game got to Keith ! Colm Daly had white against Mark Hebden in this round and while he didnt have the best of openings, he did make a fight of it against the second seed in the following game. 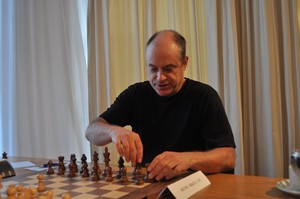 The third round clashed with the Ireland vs Argentina International Rugby Match which Ireland won comfortably, nothing to do with chess of course but I just wanted to print that !! It also gave us our first all GM clash, Gawain Jones vs Alex Baburin, this great game is certainly worth a look .

The fourth round produced some fine fighting chess too and the clash of Alex Baburin and Sam Collins game featureed a lovely picturesque checkmate, something not often seen in high level chess games. Keith Arkell returned to his efficient grinding ways as he beat Tom Healy in an instructive rook and pawn ending. After the game, I compared his chess style to Cliff Thorborns snooker style, Keith took that as a compliment ( as he probably should have )

The top of the Masters leader board at the end of round 4 looked like this:

Local junior players, Ryan Rhys Griffiths FM and John Courtney ( below, left ) were doing very well at this stage, and were rewarded with IM opposition for round 5, Ryan had white against Sam Collins on board 3 and John had John had black against Mark Heidenfeld on the next board. 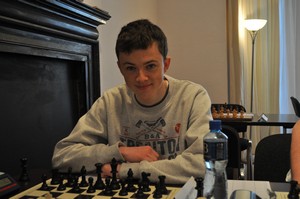 While Ryan lost to Sam in a tough game, young John Courtney was making a mockery of his rating by holding Mark Heidenfeld to a draw in a really impressive encounter.

The pairing for the final round looked like this

The last round was remarkable for its competitiveness, its not unusual for a lot of quick draws to be recorded in round 6 of a tough weekender but not here, after 3 hours of play in the masters, all but 2 games were still in progress ! Colm is reported to have missed a win in the end of his game with Mark Heidenfeld so they shared the point. Had he found this win, he would have won the  200 prize for the best Irish non-IM or GM prize.

The Board 3 clash was between local hero John Courtney and Alex Baburin was a victory for the grandmaster, the huge difference between their ratings was just too much for the young Kilkennyman, who had a remarkable event. On board 2 Keith Arkell was busy trying really hard to outplay Mark Hebden and seemed to be make some progress but as the game neared the endgame, Mark got the better of things and won a fine game to end up on 5 points.

On board 1 Sam was facing Gawain Jones whos FIDE rating is about 200 points higher than Sams and Gawain proved it in another fine game . This left Gawain also on 5 points but Marks tie-breaking score was superior and so he won the title. 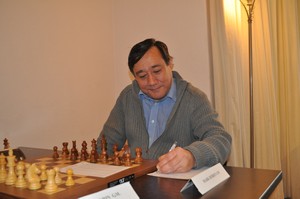 Prizes in the Masters

Mark Hebden ( pictured right )  Kilkenny Masters Champion 2012  will he get another jumper ?

Prizes in the Major 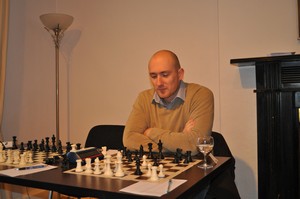 Prizes in the James Mason

Prizes in the Challengers

For the first time since 1982, Ireland held a seperate championship for the title of Womens Champion of Ireland, mainly thanks to the work and talents of Una OBoyle. There were 12 partipants and it was run smoothly by Ted Jennings alongside the Kilkenny Congress. 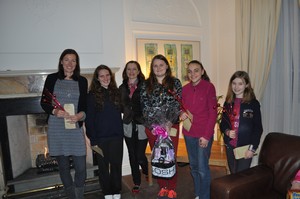 The prize winners at the 2012 Irish Womens Championship from L to R were Suzanne Barry, Karina Kruk ( Champion ) Una OBoyle ( Organiser ) Martina Mareckova ( winner of the event but as shes not Irish, could not win the title ) Diana Mirza and Eibhia Ni Mhuireagain 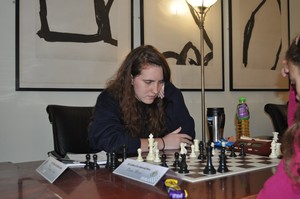 Karina Kruk, Irish Womens Champion in action during the event.