I first learned the moves at age 8. My early chess experience was extremely limited, confined to a couple of casual games in school (including the black side of Fool's Mate!) and some games against my father. He'd make it interesting for me by paying me five pounds for every draw or win I secured - needless to say, such a revenue stream ignited my interest, and within a couple of weeks this generous offer had to be withdrawn (not before I secured twenty or thirty pounds, which was gleefully squandered on whatever I was into at the time, probably computer games).

My chess career properly began when I went to Gonzaga College in Ranelagh. Housed in the middle of leafy grounds and with some fantastic teaching, Gonzaga is easily the best secondary school in Ireland and I was extremely lucky to spend six years there. Chess in the school was run by Gerry Murphy, a caped and bearded figure with an indefatigable passion for the game and a penchant for swearing. I don't think Gerry ever showed me a single move, but by running tournaments and driving students to games he single-handedly created an environment where anyone with an interest in chess ended up spending hours in play and analysis. Despite not studying the game at all, in my first two years in Gonzaga I gained about a thousand rating points (to date, acquiring the next thousand has proven more problematic, though I'm still working on it). As a school we won everything, the highlight being our double victory in the Milfield tournament.

As I improved I was offered places in various international tournaments such as the Glorney Cup and the World Under-16 championship, all of which were immense fun but in none of which I really made an impact. Getting the chance to travel across Europe was nice, though I have to confess I'm not much of a tourist so a lot of it was wasted on me. The pinnacle of these events had to be the World Junior in Goa, when a few hundred chess players were put up for free in a five star hotel on an Indian beach. I may not be a tourist, but sipping beer in a hammock at midnight under a clear sky in a balmy climate is still pleasant enough. I have to mention the Trojan efforts of the Irish Chess Union and particularly Herbert Scary in securing opportunities for a generation of Irish junior players to participate in these events.

Winning a national championship is probably the first milestone in a lot of sports careers, and chess is no different. To a certain extent such titles are mere fictions (when I won in 2002, for instance, neither Alex Baburin nor Brian Kelly competed), but they are pleasant fictions and tangible achievements. Not everyone gets to win an Irish championship. Though I can't find the games on Megabase, I recall that I won the tournament rather comfortably, and played a good game against Stephen Brady in the penultimate round to close things out. 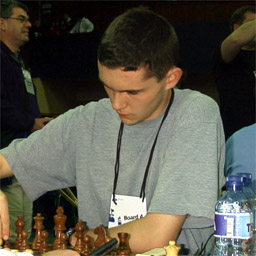 I think the highest platform for most non-professional players must be the Chess Olympiad. My call up to international duty in this regard occurred in Istanbul 2000, when I was a fresh-faced 17-year old. My rating didn't merit the place, but the Irish Chess Union has been quite forward-looking in its approach to international selections and offered me the place with a view to increasing the experience of a promising junior. In this goal they succeeded, since though my performance was drastically different from Brian Kelly's debut (when he secured the Gold Medal in Moscow), the lessons learned in this event were necessary ones for the development of my game. I played very poorly, though fortunately I was only given six games so the damage was limited!

In a certain sense Bled 2002 was my breakthrough. Winning the Irish Championship was nice, but managing to secure a gold medal is always something rather special. Rowson writes that good form is synonymous with your opponent's bad form, and this was certainly reflected in this event - in most of my games I was clearly better or winning within fifteen moves, with my opponents finding new and varied ways to wreck their own positions. I still played well and saw things clearly, however, and I suppose one always needs some luck to secure a score like 7½ from 8.

In many ways, Calvia 2004 was my best chess experience. Despite somewhat garish surroundings, I felt extremely comfortable throughout the event, and securing my IM title with a round to spare was a delicious feeling. It was also exceptionally gratifying to play thirteen of the fourteen rounds, since this gives you a real chance to boost the team's prospects. It's an interesting question as to which mood is the most appropriate for playing chess - in Bled I was miserable most of the time while in Calvia I felt really happy, and I made good results in each!

The natural state of a chess player is playing. This is one of the reasons it's so objectionable that so few grandmasters can make a decent living from playing alone, instead being forced into chess-related projects. Having dabbled in most of these alternative enterprises, however, I've enjoyed all of them - I wouldn't want to have to do them all the time, but in moderation they're good fun. I write book reviews for Alex Baburin's Chess Today, annotate games for Chess Monthly, have coached several groups including Irish school kids and an advanced class in Berekely, and to date have written two chess books. The basic rule as regards all these things is: ask. It is easy to assume that this stuff is the exclusive preserve of grandmasters and international players, but in reality most good players who can bring some originality and enthusiasm are sought after by magazines, publishers and students. It's always nice when you're playing on ICC and some Spanish guy compliments your book! In a game where one's form tends to be in the lap of the gods, creating something with lasting value is a welcome and necessary relief.

I recall reading somewhere that club players don't have styles but rather collections of weaknesses, and I think this applies to International Masters too. When I was playing in the Isle of Man a few years ago, before my game with some 2450 Alex Baburin said to me "Obviously there is something wrong with the guy's chess, since he isn't a GM." So I wouldn't like to classify my style too rigidly given that I'm trying to turn some of the weaknesses into strengths, but a few interim conclusions can be reached. I'm more of an intuitive player than a calculator, and tend to have good ideas, though sometimes in their execution I miss a shot. I've definitely become more solid over the past few years - I think my Calvia games are rather indicative of my style, and though occasionally I'll fly off the handle and lose a stupid game, such occurrences are becoming rarer. Not beating yourself is half the battle in chess.