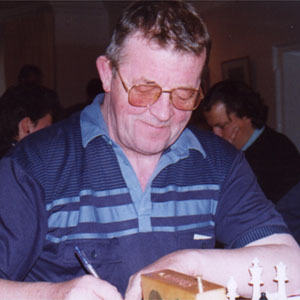 I came from a working class background in Dublin and took up chess when I was 12, shortly before my father died. My earliest recollection is of playing with him. He invented a rule whereby if his king was mated he could move it twice! My first chess club was Synge Street. In a match against arch rivals O'Connells I lost a game in only 15 minutes, an amount of time which, according to the team captain, inadequately relected the importance of the occasion and I was dropped for the next match. However I turned up anyway as a spectator and indulged in the tea and biscuits, even though there was only enough for the players and after that I was not invited to return.

My breakthrough in chess came when I was selected, in 1961, to play in the World Junior in The Hague. Competing in that tournament were such well known players such as Gheorghiu, Parma, Pfleger, Rubinetti and Schmidt but I won my first two games and in round 3 was adjourned after 60 moves against the Russian a mere pawn down in an ending. This was amazing stuff for an Irish player. They asked me who did I think was going to win the tournament and I said the German seemed to be pretty good but I didn't rule out my own chances. Anyway, I lost my next five games.

I came in just after the zonal in 1957, run by the Clontarf club. The strongest players in those days were people like Heidenfeld, who was at his peak, Terry Kelly, Brian Kerr, Michael Littleton, Hugh MacGrillen, from the North and extremely talented, John Moles, a very strong player who wrote a book on the French Defence, Willie Stanton and Jim Walsh who won the Dublin city championship five or six times. I'm probably leaving some people out.

The most remarkable change in chess between that time and now is that the average age has dropped from the late sixties to the early twenties. For example, in the 1960's Dublin chess club was fairly exclusive and seemed to contain a fair number of elderly gentlemen of leisure. People like John O'Hanlon, who first won the ICU Irish championship in 1913, and Michael Schuster, the 1952 champion. They would meet in the evening, would chatter incessantly through the games. Oh what a lovely move Charles, and so on, absolutely old gentleman stuff.

My first olympiad was in Israel in 1964. On that team there was Warwick Nash from Athlone who got a totally winning position a piece up agaist Bisguier (a grand master) but mentioned to his team captain that he didn't think he could hold it. He was right.

It was in Tel Aviv that I became the first Irish player to beat a grand master (the title didn't exist in 1935 when Reilly beat Fine in the 1935 olympiad). There's a nice story behind this game. I was adjourned the exchange up against the Swedish number one, Ståhlberg. If I won the game Israel, the home team, would qualify for the top final section, but if I drew or lost, Sweden would qualify. That evening the entire Israel team visited my room to analyse the game. Everybody agreed, it was no problem. That's when I started getting nervous. I agonised over this game for several more hours and at 2 o'clock in the morning I phoned Stahlberg's room to offer a draw but there was no answer. So I just had to turn up the next day and beat him.

The best of all trips though was Cuba which followed in 1968. That was notable for the lavish way we were all treated. For example our air fare was paid by the Cuban government, a chauffeur driven car was laid on for each team and we were each gifted a magnificent chess set. Every member of every team played in a vast simultaneous in a square in Havana. 400 Olympiad contestants against 8000 Cubans. I finished all my games in about an hour and a half just before a tropical storm washed the whole thing out.

We were in Cuba for six weeks and after that myself, Ray Cassidy, and other players, including Bobby Fischer, stayed on as guests of the government for another two and a half weeks. I remember asking Bobby in night club in Havana if he would play in a tournament in Ireland. "Sure", was the reply, "that'll be $25,000". He was great company actually, and absolutely idolised by the Cubans.

I won the Irish championships just twice (1975, 1979), both times sharing it. I usually came fairly high up when I played but I was never in the top rank. So although, over the years, I've beaten the likes of Dunne, Heidenfeld, Kernan and Littleton they were all just that little bit better than me. Bernard Kernan was undoubtedly the greatest Irish chess talent ever.

Wolfgang Heidenfeld never quite made it to the top, he was an excellent tactician but not so good positionally. A complicated character, he could be an arrogant and difficult man but also a man of principles and impeccable manners.

I sort of gave up serious chess round about 1987 (I now play what I call "cavalier chess"). I had a young family and a business and I made up my mind that chess was a pastime for me, not a passion and certainly not a way of earning a living. I then got involved in administration. Even though they made me honorary president of the ICU I've never been very good at working in committees so I prefer to do these things on my own. I set myself the goals of trying to get international masters or grand masters to reside here in Ireland, to organise international tournaments and to get chess taught in schools. We've now have Baburin, Hennigan and Zimmersman all living in Dublin, we've had the Telecom tournament in 1991 where we had 14 titled players and we have the EEC paying for six full time chess teachers in Dublin. Myself and some friends have given financial support to some of this activity.

I'll tell you a funny story. I was once asked to present the prizes at the community games out in Ballyfermot in Dublin and as part of the day's activities I gave a simultaneous against all the kids who'd won a prize. I saw a pretty queen sacrifice on one of the boards and played the move. Then, when I came round again, this red haired freckled eight year old swiped my queen and called over his mates who clustered round the board. Next time around I made a quiet pawn move and the kid was showing the captured queen to all his mates. The next time around I said check, and the next time around I said mate. He looked up and his face was bright red and he said "Well f*@! ya mister!" from the depth of his heart.

We've had some very famous players over in Ireland to give simultaneous displays. For example I and the Kilkenny club once brought over Spassky (£5,000 for four days). Another time we had Bronstein. There was a reception in a big hotel, the Russian ambassador was invited and before the simultaneous Bronstein and I had a blitz game for the benefit of some newspaper photographers. I was crushing him in this game, but offered a draw which he accepted. Later in the simultaneous whenever he got a winning position, which he did on every board, he offered a draw.