My mother's side of the family are 100% Ulster for over 200 years. My father's is mostly unknown but his father was from Dublin. I spent my youth around High Wycombe in Bucks., with summer holidays at my grandparents in Newcastle, Co. Down.

I learnt chess from the boy next door at about age 9. It was at grammar school that I joined the chess club and became hooked. Once picked I never missed a school match and was board 1 for 3 years. But the local standard was low and in the Sunday Times event we never got far. 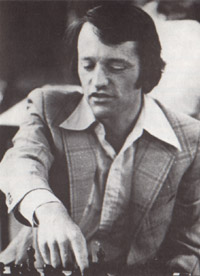 From an early age I was good at maths (and not much else). Expert tuition got me to Cambridge, which developed my chess enormously. I won the British U-21 title (jointly) a month after getting a first class degree. Definitely a high point. From Cambridge I went to Leeds for a Ph.D., then to Manchester as a temporary lecturer. Finally came my first (and last) permanent job at Edge Hill college, Ormskirk, near Liverpool.

During this period I played a mass of chess - leagues, county matches, British Championships qualifiers, weekend congresses - mostly in northern England. The idea of playing in Ireland had been in my mind for some time and in 1975 I took the plunge (Leeds to Manchester to Liverpool seemed an omen). I was amazed to succeed at my first attempt. Three wins in 4 years followed. A second high point.

Between 1976 and 1988, I played in 5 olympiads for Ireland. These I found exciting, chaotic and at times depressing (up one round, down the next). But somewhere here I stopped improving and results levelled off. I believe the reason is that I never found a way of studying chess that worked for me. Playing gives an adrenaline surge that maths can't, but chess study seems boring.

At the Malta Olympiad (1980) I was picked to play board 3. In the first round I sat down and played several moves against a GM. Suddenly the game was stopped: a slip of the pen had put me on board 4 on the team list. I restarted against a different GM and remained on board 4 in future olympiads.

In 1986 the olympiad selectors decided to make the 1986 Irish Championships a team selection event. In round 3 I met Keith Allen (both of us on 1½/2). I lost in 166 moves with R v R + B, played at 20 per hour over several days, a marathon game. The 50 move rule had recently been extended to 100 moves for this ending, computers having found winning chances. Later, further analysis cancelled these chances and the extension was dropped. I lost 91 moves after the last capture.

Since marriage and 2 kids, I have taken to correspondence chess. The IM title came in 94 and my rating is now 2510. Being forced to study positions for days on end has filled gaps in my knowledge and I feel another high point is achievable.

I rarely play brilliant games, unless to refute an unsound attack. I prefer simple positional play and exchanging pieces. I have chosen two games from the 1978 Irish Championship which are illustrative of my positional style and the openings I use. The first is against Philip Short from round 6 where he blundered after having to defend for a long time. The second is against Michael Littleton from round 8.

At the start of round 8 I was half a point in the lead but Eugene Curtin won his game and went into the lead himself. I would have been content just to draw with Michael, knowing I would probably get the white pieces in the last round, but he made a mistake on move 27. The finish looks good but it was all adjournment analysis. There was a two hour break after move 40 during which I sat alone in a corner analysing with a pocket set. The next day I agreed a draw when the position became unclear in time trouble but Eugene also drew so I was Champion.