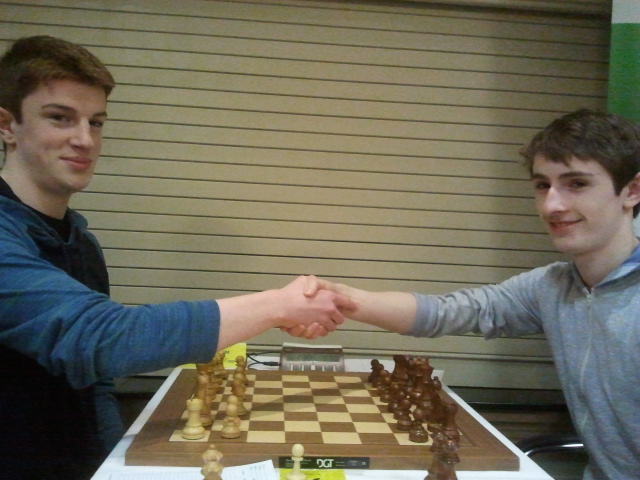 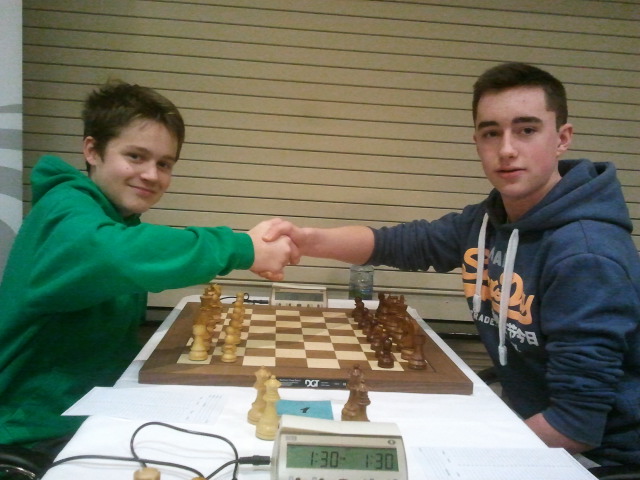 7.30pm and we're off. The top boards in the top four sections are online, as befits a tournament of this status. For added pressure, they're also played on an elevated stage at the head of the room, and the first round starts off not with the usual posting of a draw, but by calling the board 1 pairings up from the main crowd to take their places centre stage. Rippling applause spreads as the players take their places in the comfy leather seats robbed from the hotel's Conference Centre, and take in the view from on high.

There's quite a wide spread of ratings across the sections, and the first round is full of what appear to be mis-matches. Junior tournaments are notoriously difficult to predict, but in this case, the ratings are justified - of Friday's 37 matches, only two go against seed. Richard Sheahan picks up an excellent win against second seed Dayna Ferguson in the U12s, while right at the death, Robbie Kildea claims and is given a draw against Aodhán Keane. Aodhán had been a piece up, but Robbie's 500 extra rating points saw him conjour up a few attacks, claw back material bit by bit and - after the controller had given extra time to play on and see how the game was going - he ultimately reached a dead position. 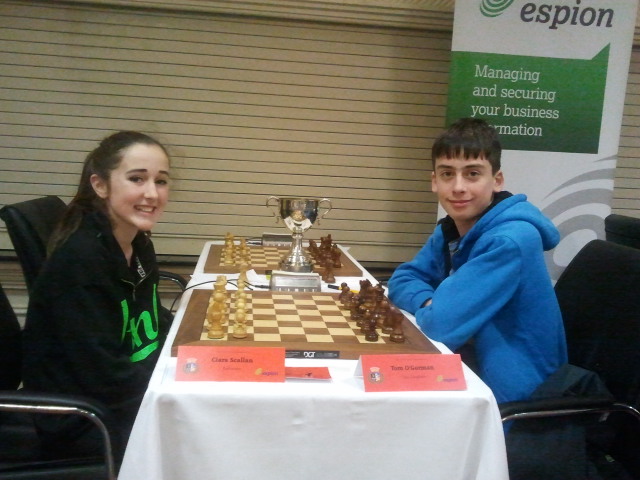 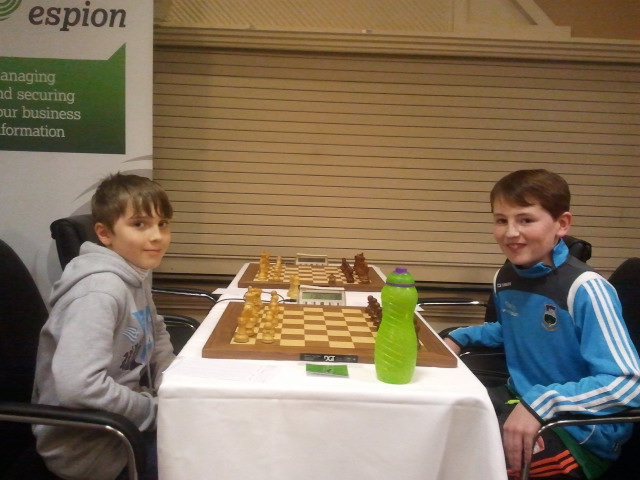 So most of the contenders avoid the banana skin that is the first round. Within minutes of its conclusion, the round 2 draws are sent out by text for the first time ever at an Irish tournament. Will the chance of extra prep be taken for round 2? Will those with a morning bye arrive more refreshed than usual for round 3? The morning will reveal all!

Round 2 sees the U10s join the fray. They usually start in a whirlwind of quick results and lost pieces - but 2016 is different as the round starts with the hotel fire alarm. In Ireland, of course, no-one pays any heed to fire alarms, but there is at least one member of the hotel staff running around like it might be genuine, so we decide to take precautions. We manage to get all games paused before the alarm is muted and forgotten.

When the games resume, board 2 in the U10s is the most interesting position. St Benildus' Thomas Cooney, playing in his first rating tournament, has black against the second seed, Con Kirby. Con could have been forgiven for expecting an easy win, but instead Thomas brings out a trappy line learned online -

Objectively weak - but the pawn is poisoned, as we shall see!

White has to go in for 5. BxP+ Ke7 6. 0-0 QxN, when the two pawns and safe king give approximate compensation for the piece.

And black, a queen up, later stalemates his opponent.

All bar two of the games in the U-10s are finished within an hour – the one just noted, and a second game which had reached a K+P v K ending. White promotes, reaches the end of his scoresheet and enquires if this means the result is now a draw. Rather kindly, the controller doles out a second sheet, and the win is soon converted.

In the other sections, the top seeds have all retained their spots on the live boards for the second round, though Andrew Kildea has to put in a bit of overtime to get the ever-temperamental system to acknowledge their new opponents! Once things get underway, Felix Jordan falls to a family fork against Danny Dwyer in the U12s, Tom O’Gorman, who has opted for the U-14s, wins after his rook travels from d1 to h1 to h8 to g8 to g7 to f7 in successive moves – now stuck in the heart of opponent Denis Ruchko’s position, there's inevitably a tactic, and the rook gives itself up for two bishops, which then walk a pawn home through a helpless rook.

Conor O’Donnell again sees off Dylan Boland in the top section – the two met twice in last year's Leinster Juniors, in this year’s Gonzaga Masters and in numerous schools matches over the past few years – but we do have the first live upset when Shane Melaugh fights back from two pawns down against Ross Beatty in the U-16s to reach a R+3 each ending, which fizzles out into a completely dead position of two kings apiece. The U-16s is likely to be the most fiercely-contested of all the section, and we should have two new players on the live boards for round 3.

On floor level, the U-19s were unfortunately truncated by two travelling byes; William Kenny – bottom seed by some 200 points – pickesd up the result of the tournament so far when drawing with second seed Luke Scott, while Paul O’Neill beats Rudolf Tirziman, leaving Conor as the only player on 2/2. Unlike the U-16s, it’s looking ominous in the U-19s already.

In the U14s, the top seeds are cutting clear. Henry Li, Alex Byrne and Seán Hunter have joined Tom O’Gorman on 2/2, with Matthew Gallagher and Gianfranco Ameri – who has no Irish rating, but is around 1600 in England – are on 1½/2 after they draw a hard-fought game which goes down to the final couple of minutes.

In the U12s, second seed Dayna’s surprise loss in round 1 is followed by a draw for the other second seed, Adam Murphy, same rating, against Mateo Plaza Reino in a clash between the winners of the U-10s section for the last three years (though Mateo was ineligible for the title when winning last year), now renewing acquaintances at the next level up. Fourth-seed David Remenyik is now Danny Dwyer’s main rival in his quest for two-in-a-row.

The morning concludes with a blink-and-you'll-miss-it cameo from the U-10s. Operating on a different schedule to the rest of the tournament, they start their round 30 minutes from the end of the main sections, and are all finished within about five minutes of the end of the main sections. Top seed and reigning champion Admira Aida Kecskemeti is in a pack of five players still on 2/2.

Under 10s are like pens. One moment you have lots of them; the next they're all gone. The great pen famine strikes around the start of the third round. We had brought 50 - and by lunchtime we're tucking into the backup stack of 20 we'd bought in a mild panic this morning. Pens are presumably littered everywhere - I've seen one in the bathroom - but the players keep coming back to the organisers for more.

The Under 10s' brief appearance was again over within 45 minutes. But they're learning at least. Thomas Cooney, who had stalemated his first-round opponent when he had Q, R and two pawns against sole king, reached a position of Q, R + 2P against king and, crucially, a pawn. His winning tactic was to again stalemate his opponent's king, and when the pawn moved, any check would be mate. Simple, but effective, and he's off the mark.

Ratings don't really mean anything in this section - or so the conventional wisdom goes. But at the half-way point, nine of the top ten players have ratings, and only one rated player is outside the top ten. Is that bit of extra experience standing to them? Ben Murray, the Leinster U-10 champion but without a rating, was up against Gavin Redmond of Bray, rated 767, in one of two matches between players on 2/2. A king and pawn endgame was reached, which became a pure race to promote rook pawns. Gavin queened first, at which point Ben reached to promote his own pawn...and then realised why rook pawn promotions are so awkward. It's Gavin who in round 4 takes on reigning champion Admira, sailing serenely through the section so far; for Ben, that pang of hurt we've all experienced when starting out and discovering one of chess' little quirks the hard way. But it's the best way to learn.

Elsewhere, the live games are getting more juicy - and to acknowledge this, spectators decamped to the Dungeon Bar, where the hotel had set up a big screen to watch the games. Brendan Cooney provided his analysis and did a round of the boards. After a few minutes, we became suspicious when Utkarsh Gupta, taking on Danny Dwyer in the U-12s, seemed to be taking an age over what looked a straightforward immediate plan of kicking Danny's rook from e7. A quick trip to the main venue confirmed the worst - the internet connection had been broken, and in the bar, we'd been missing the action. Connection restored, the game skipped forward many moves - but the discussion resumed.

Danny took the point in the end to take the outright lead. Behind him, David Remenyik, James Naughton and Sanjay Menon all slipped up - David and James shared a point between them - while Dayna succumbed to a second upset, this time losing to Cillian Scallan.

In the U-14s, the tie of the tournament so far saw Tom O'Gorman up against Alex Byrne. Tom, with black, got a huge pawn on d2, supported by two rooks, while Alex's own rooks desperately tried to keep the pawn at bay. But Alex ended up squeezed to death, ultimately walking into a mate in 1. Assuming the U-14s is to go to one of the Li/O'Gorman/Byrne triumvirate, Alex will be fairly strongly behind Henry Li in his evening encounter against Tom.

The Irish Juniors isn't just for players living in Ireland, of course, and there's a few who've travelled from farther afield to enter, taking advantage of Irish parentage. Two of those met in the U-14 afternoon session - Dylan Capaces from Nancy losing out to Gianfranco Ameri from Pimlico. Gianfranco's English rating is around 1600, and could well be a dark horse if any of the Triumvirate underestimate him, having already won their own little mini-tournament.

Endings are often under-studied at junior level - many's the senior player who's deliberately steered a promising, maybe even higher-rated, junior towards an ending for this reason. Maybe that's why one U-16 reached the position of 2R+P v R...and the rook won! We've yet to find out how this actually happened - the winner kept shtum out of modesty when we asked, and the loser was very quickly nowhere to be found.

Following the top-board draw in the morning, we had two new players in live action for this round - Pádraig Hughes built up a big centre from the opening against Fiachra Scallan, and though in the final position, it was Fiachra who had the big pawn centre, Pádraig did have a piece, and Pádraig kept his place in the hot-seat. He'll face Diana Mirza next, who got the better of Michael Higgins.

In the U-19s, Conor O'Donnell moved a point clear after victory over Luke Scott, who is now in a bunch comprising two-thirds of the field on 1½/3. Dylan Boland is the only player other than Conor to be on a plus score, after scraping past clubmate William Kenny, who came very close to picking up another heroic draw to add to his collection.