Following his tragic death in 1968, the Munster Chess Union setup a sub-committee consisting of M.Coveney, T.Deeney, L.Spillane and M.Kennefick, to devise a way of honouring Noel's memory. They came up with the idea of an annual tournament in his name (the Mulcahy Memorial Tournament in Cork) and also produced a booklet of his games. The text below is based on the introductory section of the booklet. 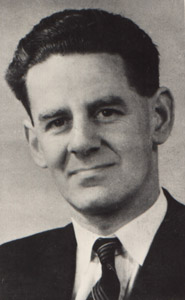 An anonymous columnist writing in the Irish chess magazine Ficheall in January 1956 considered the late E.N.Mulcahy to be Irelands strongest player at that time. Indeed Mulcahys claims to being the countrys leading player on many other occasions up to the time of his tragic death in the Aer Lingus Viscount disaster in 1968 are strong.

There are those who maintain that he was still the countrys top player at the time of his death and that given the time and practice he would have dominated all national competitions. Noel Mulcahys chess career can conveniently be divided into four periods.

First, there was the early period back in 1947 when he came to UCC from Mount Melleray College, Co. Waterford. Together with Ferdy OHalloran, Fr. J.Casey and the late P.B.Kennedy, he was active in the chess revival in UCC at that time. Mulcahys first trophy was the Cork junior championship which he shared with F.Healy and M.Falvey in 1949. In the same year Professor Kennedy was to have a remarkable record-breaking win in the Irish championship and Mulcahy, who learnt a great deal from Kennedys games, emulated him in winning the Irish himself in Galway four years later (he was also runner-up to A.Bourke in 1951). This win brought to an end his early development when he advanced from junior ranks to full national honours.

That July day in Galway when Mulcahy took the 1953 championship ahead of five former holders, including the reigning champion Michael Schuster, and the following years champion, player:T.Kelly, heralded in the greatest period in his career. The following year he was runner-up in the Irish championship (winning a nice miniature against O'Riordan) and he also represented Ireland at the West European Zonal in Munich. His performance in the Zonal was the best ever by an Irish player and included a crushing win against the Dutch international master Bouwmeester as well as more wins against Aitken and Jacob. The same year he retained the Universities' title and he also won a small tournament in UCC in which John Reid also competed.

In 1955, he again won the Universities championship and set up a unique record of three in a row in this difficult contest. The An Tóstal Tournament was transferred from Dublin to Cork and in a very strong field Mulcahy finished well ahead of the other Irish players and only half a point behind grandmaster 0.Bernstein. A draw in the last round against Van Scheltinga, the Dutch master, cost Mulcahy a place on the prize list. He modestly remarked later that he would have won if his rook endings had been a bit better.

A few months later he tied with Vincent Maher in the Irish but Maher, with the better tie-break score, took the title. Shortly after Christmas 1955 Mulcahy competed at Hastings and finished just short of the prize list in Premier Reserves 'A'. This brought to an end the second period of his chess career.

Following a break of a few years he was runner-up again in the 1960 championship. In the early sixties he spent a few years in Manchester at the Institute of Science and Technology carrying out research work in inorganic chemistry. While in Manchester he won the Manchester and District championship in 1963. He returned to Cork in 1964 to take up the post of lecturer in the Chemistry Department in UCC. His duties there and the fact that he was secretary of the New Science Building Committee (virtually a fulltime post in its own right) prevented him from competing in the national arena for a few years. However he made a successful return in the UCC Clubs 1916 Jubilee tournament at Crosshaven in 1966.

In the space of about 16 months from Easter 1966 to July 1967 he competed in four major tournaments and tied for first place in two of them. At Crosshaven he shared the honours with E.Keogh and Deiseach and again in August 1966 in the first Myles Farrington tournament in Dublin he divided first prize with Heidenfeld, Littleton and OLeary. In the second Myles Farrington in Dublin at Easter 1967 he tied for 3/6 places half a point behind the winners, OLeary and World Junior Champion, Kurajica. After a slow start and a third round loss to OLeary, Mulcahy put in a fine finish to win three of his remaining games. His last major tournament was the 1967 Irish championship in Cork where he tied for 5/12 places.

On the Munster circuit he won everything at one time or another and he was at the time of his death the Munster and, incidentally, the Irish, lightning champion. He won the Cork senior championship five times and the South Munster championship many times. In Munster chess his class really told and 100 per cent scores did not seem too difficult to him.

He had a truly enviable record in the Irish championship and in seven appearances he was either winner or runner-up five times. Anyone who has played in the Irish championship knows how hard it is to maintain a record like this. He first competed in Belfast in 1950 then in Cork 1951, Galway 1953, Belfast 1954, Cork 1955, Dublin 1960 and Cork 1967.

Noel Mulcahy will be remembered by chess players for his great enthusiasm for the game, his marvellous memory (after a lightning tournament he could often recall all his games and frequently surprised one by supplying the score of a thirty move game a few days after it had been played), his wide opening repertoire, his combinative abilities in the middle game and a not infrequent touch of virtuosity in the endings.

Always wearing his many chess distinctions lightly he went out of his way to promote the game by every means in his power. He was always at the disposal of clubs for simultaneous matches and he helped chess in many not so publicised ways too. He was a past president of the Munster Chess Union and was for many years President of the UCC club. His association with the college club was very strong and went back to the late forties when as a student he was actively engaged in its revival. He was particularly proud of the fact that he had an unbeaten club record in senior chess for UCC. His individual losses were few and far between and over a 15 year span one could almost count them on the fingers of one hand.

In earlier years he had played a great part in chess organisation but, in the sixties, he had moved out of this and his services were more in demand as an analyst and adjudicator. So fair and good were his judgements considered to be that he often had games from various parts of Munster on hand simultaneously and it was not uncommon to find him adjudicating games involving players from his own club.

As a person Noel Mulcahy will be remembered for his helpfulness, kindness and modest manner. His passing has been felt by players of all grades not only in Munster but throughout Ireland. He is survived by his wife, Dr Maire Mulcahy, who lectures in zoology at UCC, and by a daughter.