The last weekend of the 2016 Irish Championships

You can read a full day by day review of the Irish Championships here but here are photos of the prize winners: 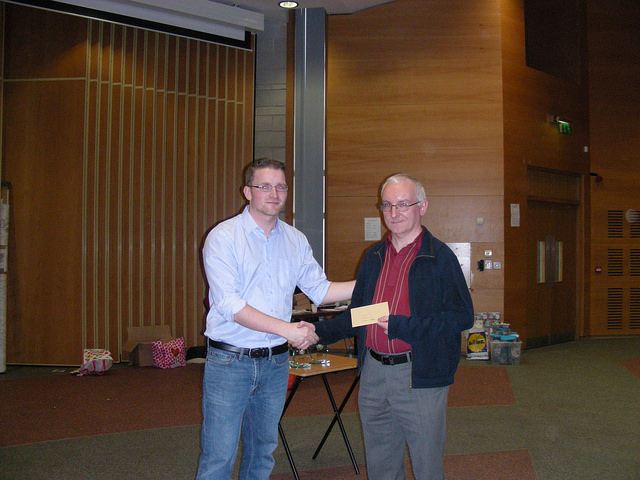 Anthony Fox - received the prize for best player under 2100. Anthony had wins against Melaugh, Haque and Beatty; draws against Daly, O'Connell and Scott; and losses against Jessel, Delaney and Butler. That was good for a score of 50% (on 4.5/9). 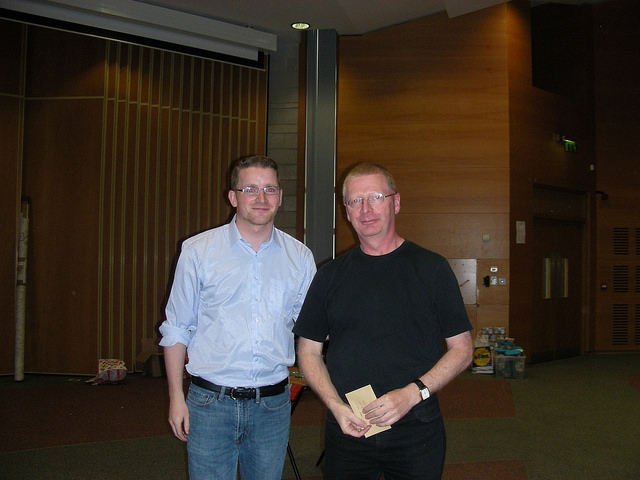 Kevin Butler - received the prize for 4th place. Kevin was neck and neck with Fox all tournament but broke clear with a win against him in round 9. His tournament included five wins (against O'Neill, Mirza, O'Connell, Scott and Fox), one draw (against Melaugh) and three losses (against the top three seeds: Jessel, Daly and Delaney) which gave him a score of 5.5/9. 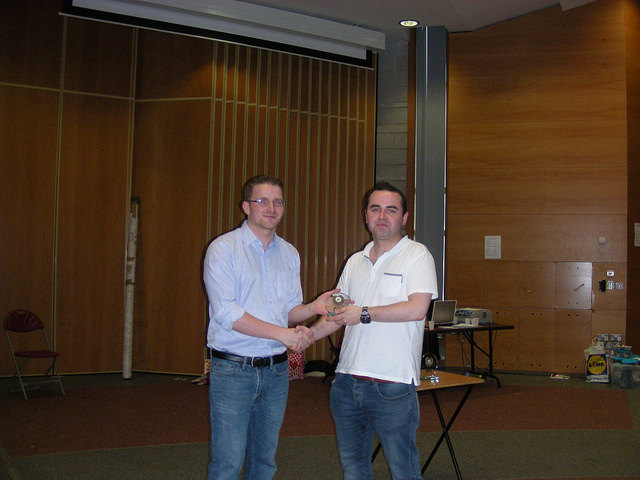 Killian Delaney - received the prize for 3rd place. After Jessel defeated Daly in round 5, Delaney was left as the main opposition to Jessel winning his first Irish Championship. Although Delaney lost to Jessel in round 3, he remained only a half a point behind going into round 7. It was there he met Daly who ended Delaney's title chances in a tight game. Delaney had an impressive six wins, one draw and two losses; good for a score of 6.5/9.

Colm Daly - had to leave before the prize-giving but finished the tournament in 2nd place. As a six time champion, Daly will probably be a little disappointed not to add to his haul with a seventh title. However, he did push the champion very close in round 5 and looked to be ahead for most of their game. Jessel ended up winning that game but Daly went on to win his last four games and snatch second place from Delaney. A somewhat slow start with two draws in the first 3 games probably added some pressure to later games but Daly still managed an impressive score of 7/9. 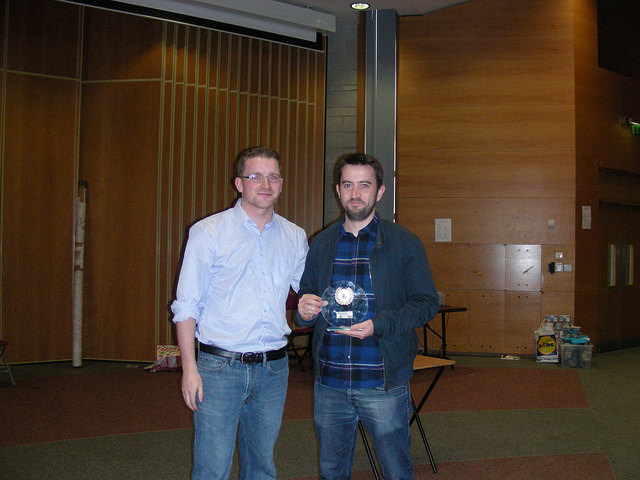 Stephen Jessel - the 2016 champion received his trophy (courtesy of Awards And Gifts) as well as the perpetual trophy at the prize-giving. Stephen played some terrific chess and amassed a score of 8.5/9 with the solitary blemish coming in the form of a draw against Gerry O'Connell in round 4. We look forward to seeing Stephen represent Ireland in the Olympiad in 6 weeks' time and have no doubt he'll perform very well there while in this type of form. 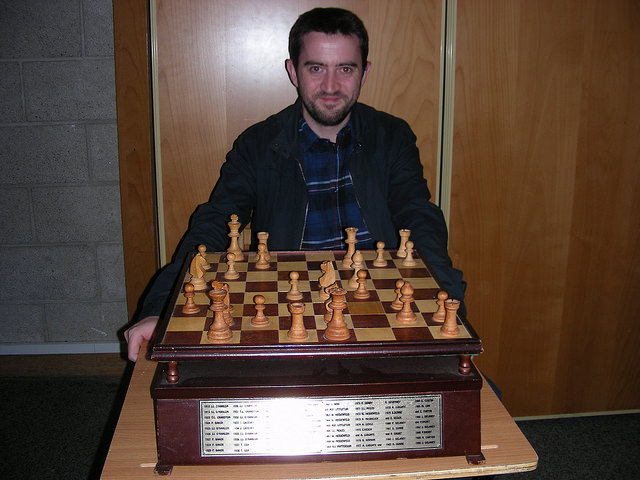 David Murray - collecting his third place trophy in the Irish Championship Weekender. David will admit himself that he didn't hit top form in this event and he was almost made suffer for it in round 1 when Martin Kelly held an advantage over him early on. David recovered to win that game but was met with similar problems in round 2 - although this time he could not recover as well as he had done before. In this round his opponent was Gavin Melaugh who held an advantage over David through the middle-game before the two settled for a draw. David then recorded a win over Dayna Ferguson (who we mentioned in an article recently for her impressive play in the 38th Bulgarian Open) before beating friend and co-worker, Stephen Moran, in round 4. David, then on 3.5/4, faced top seed, Ioana Gelip in round 5 for the title. Ioana, already on 4/4, needed only a draw and that's what she got. David finished on 4/5 in a tie for second with Stephen Moran (2nd on tie-break), Shahram Nikrow and Miroslav Gallik. 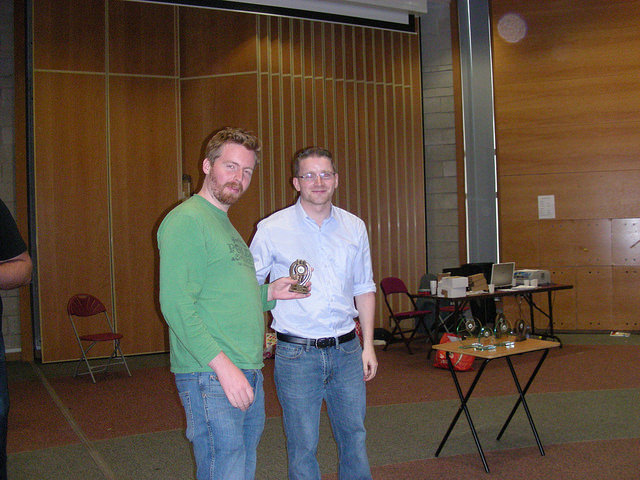 Stephen Moran - Irish Weekender Runner-up 2016 receiving his trophy. Stephen will surely hit the top of the podium some day soon but for now he seems stuck in second place this season with his finish here, the Galway Rapidplay 2016, The Easystream Irish Blitz Championships, The Easystream Irish Rapid Championships, Limerick Open 2015, the City of Dublin, and two second place trophies with Trinity in the Armstrong league and National Club Championships. Perhaps the 2016-17 season will prove to be the break-through year for Stephen. In this event, he just had one blemish on his scorecard which was a loss to David Murray although he didn't have things all his own way for the rest of the event. In round 1 he got himself into trouble against up-and-comer Utkarsh Gupta, both on the board and on the clock, before recovering to steal a win. He finished on 4/5. 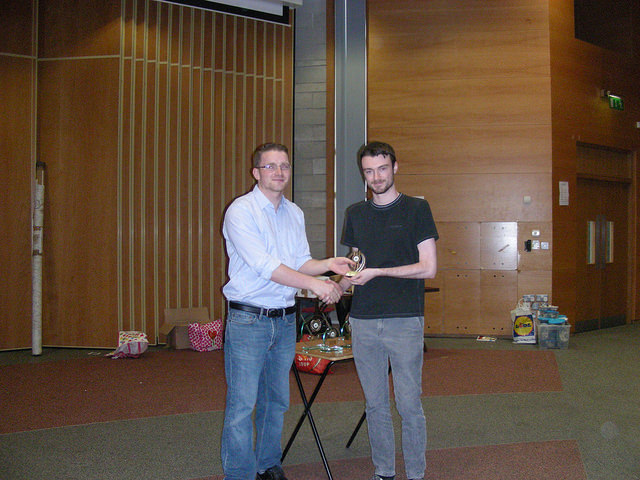 Ioana Gelip - Irish Weekender Champion 2016 receiving her trophy. Ioana added to her triumph at the Limerick Open 2015 with a dominant performance at the Irish Championship Weekender. She defeated several strong players on her way to the title including fourth seed, Gordon Freeman, and sixth seed, Anastasia Mohylna before a draw against second seed, David Murray, secured first place. 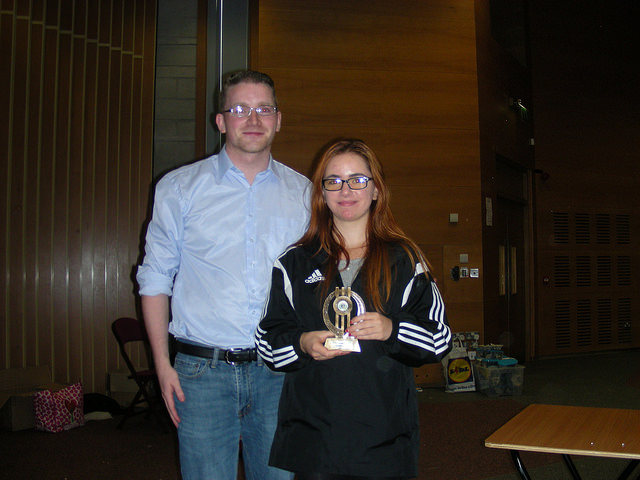 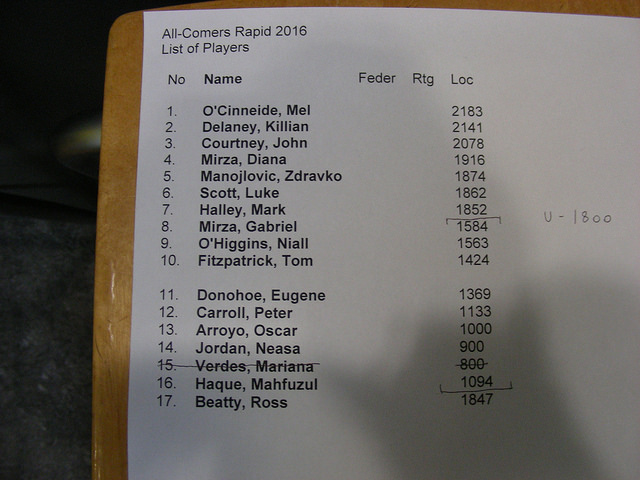 The fun rapid took place on the Sunday of the Irish Championships and featured some individuals who'd been playing in the week-long event, some who'd finished early in the Weekender and others who were just in to spectate. The event proved popular with 16 individuals signing up on the day and although the event was listed as "fun" - it was taken quite seriously by most involved. 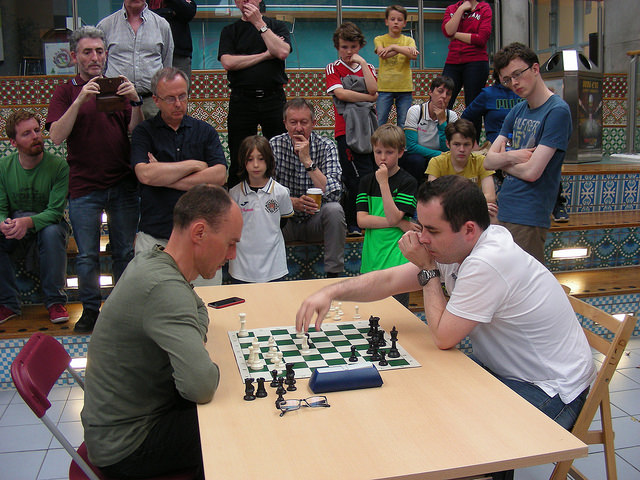 Mel O'Cinneide and Killian Delaney both finished the event on 5.5/6 having drawn with each other in an earlier round. They then played a blitz playoff to decide the overall winner - as you can see for the above picture, there were a lot of interested spectators! 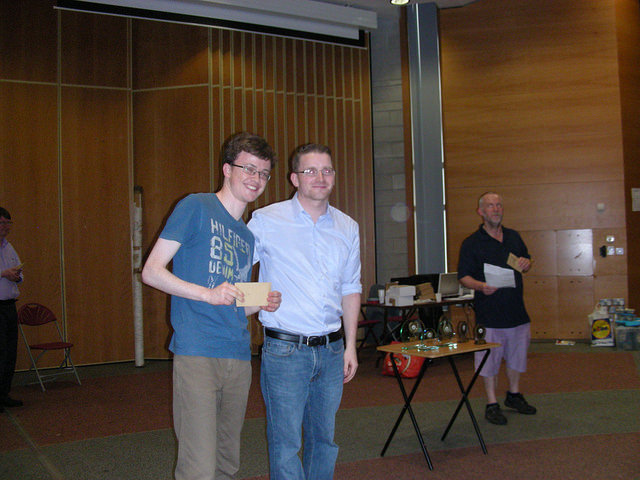 John Courtney finished the event on 5/6 and picked up his prize above. While in the blitz playoff, it was Killian who emerged the victor! 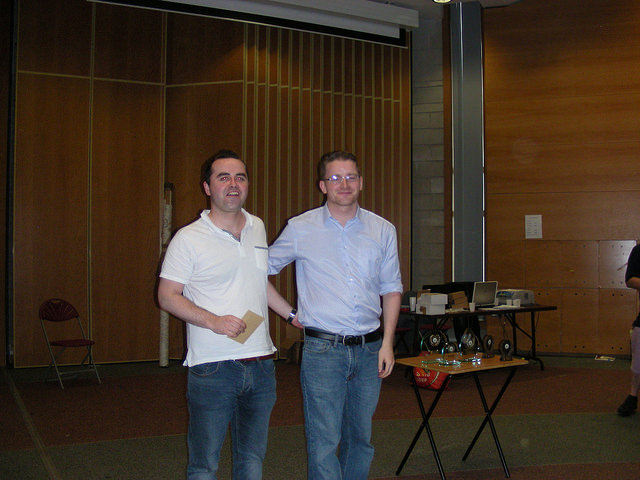 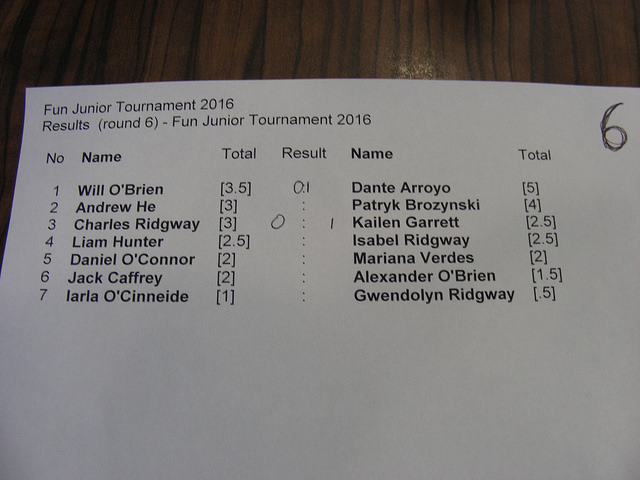 Running simultaneously to the Fun Rapid was the Junior Rapid. Again, the event featured 16 players and was very competitive with Dante Arroyo Jimenez (whose parents provided us with many of these photos) emerging as champion. 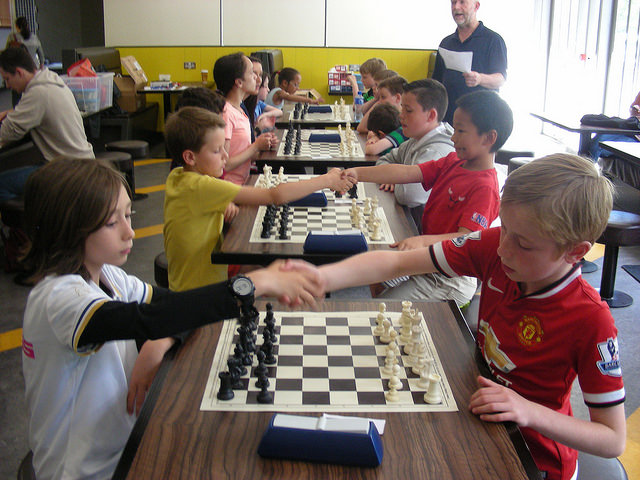 Two of the prize winners (including Dante and his parents - who happened to be travelling around Ireland for the duration of the Irish Championships) are featured in photos below. 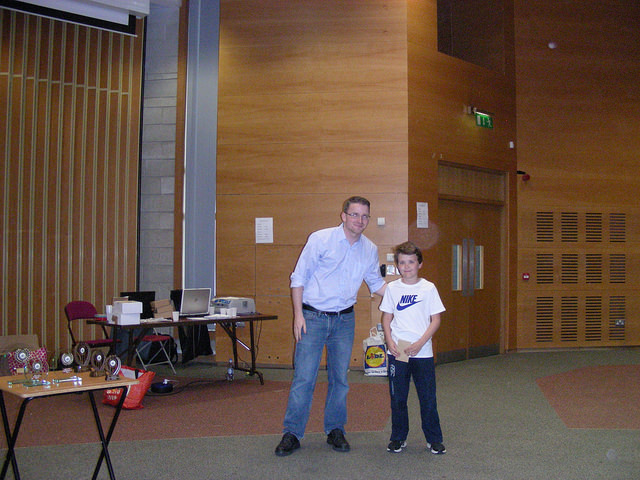 Congratulations to Dante (pictured below) 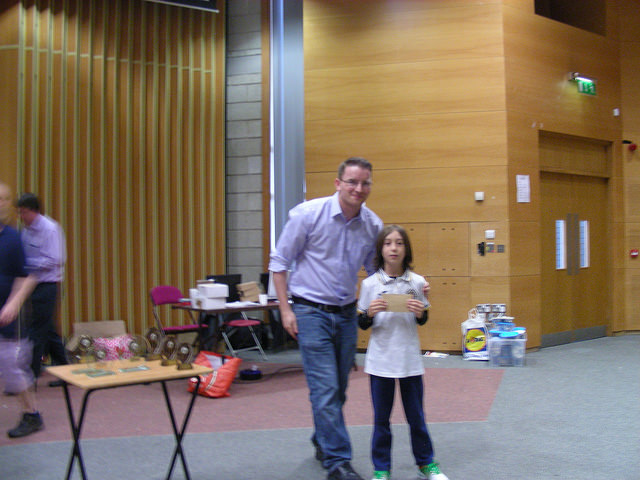 Special thanks must go to Desmond Beatty for his work throughout the week including running the two rapid events, Herbert Scarry for his work at the two weekends, Ivan Baburin for being there for the entire tournament and overseeing every event and also Oscar Arroyo Jimenez for being our photographer!