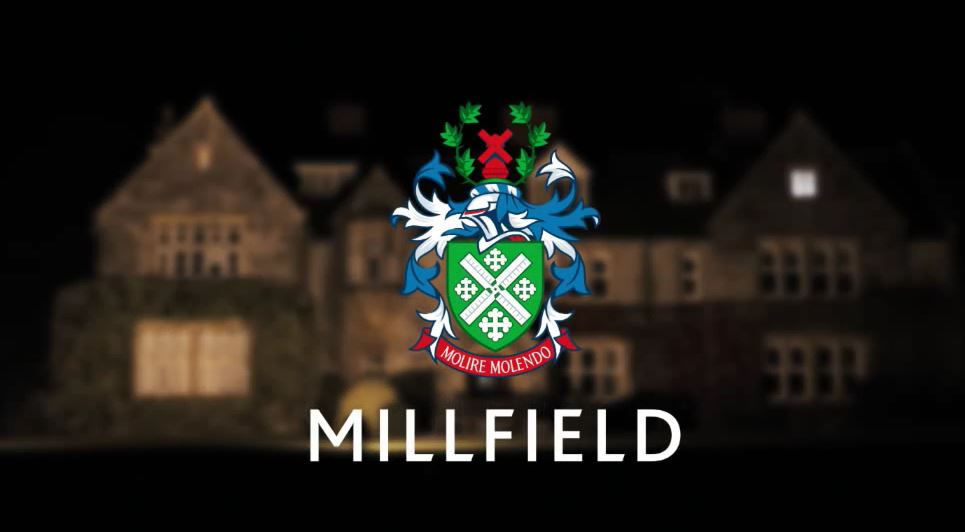 In what may be the largest ever overseas chess delegation from Ireland, a contingent of over 100 will descend on Street, Somerset this weekend for the 33rd Millfield International Schools Chess Tournament. There are 84 players from 4 schools with the balance made up of teachers, parents and at least one sibling!

Champions, Gonzaga with 27 players are looking to make it 3 in a row or even repeat their double of 2014 with the Major while Major holders, St. Benildus, with 25 players would at least look to retain it or, better, take the Championships.

Collaiste Eanna with 2 teams of 12 are back for the third time and St. Andrew's make a welcome return from their 2014 debut in a hybrid team of 5 with 7 St. Benildus Bs. This time they travel with 8 and are kindly supported with 3 from Gonzaga and 1 from St. Benildus to make up their 12.

The format of the event is teams of 12 playing 2 preliminary rounds on Saturday morning with the top 6 headed for the all-play-all 5-round Championship section and the remainder a 5-round swiss Major section over Saturday afternoon and Sunday.

Millfield school is on the hill opposite Glastonbury and its famous Tor, in the town of Street, home of Clarks of shoe fame. Millfield boasts a resident GM, Matthew Turner, as a full time staff member dedicated to chess. 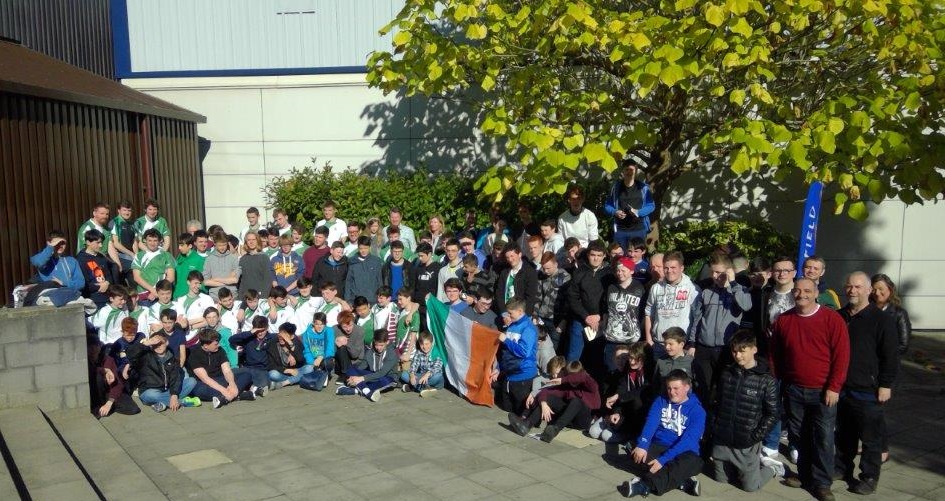 This year there are 12 teams in all with notable absentees including Haberdashers Aske (don't!) and Manchester Grammar. With the majority of the teams (7) being from Ireland in a west country event, this is looking like the schools chess equivalent of the Cheltenham National Hunt Festival!

Gonzaga start as favourites but Royal Grammar School, Guilford, who came 2nd last year, will be looking to put an end to the three-in-a-row.

The first of the two preliminary rounds saw Guilford edge Gonzaga with Benildus A in 4th, not far behind.

So two of the Irish teams into the Championship section, the other five to battle it out with Winchester in the Major. Can any of them overcome favourites in both, Gonzaga?

After the two afternoon rounds, Gonzaga B take a clear lead in the Majors, but are 1.5 points down to Guilford in the Championships. Can they turn it around on Sunday.

After the first Sunday round, round 3, Gonzaga College have taken the lead by a single point with 2 rounds to go. However, they are followed closely by Royal Grammar School, Guildford and the hosts Millfield Senior School.

Gonzaga College B lead the major section but Winchester, Hampshire gained some ground. St. Andrew's College consolidated 3rd while Coláiste Éanna A have jumped past St Benildus College B.

Gonzaga do the double, winning the Championships by a comfortable margin and the Major at a canter (though not quite the 2015 St Benildus gallop!)

Of the other Irish Team's St Benildus A are 4th in the Championships, St, Andrews and Collaiste Eanna A joint third in the Majors ahead of both Benildus and Eanna B teams. 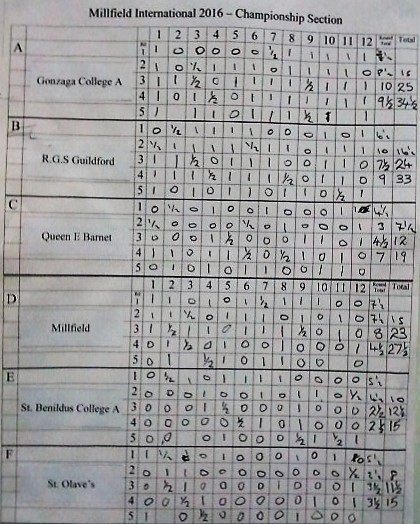 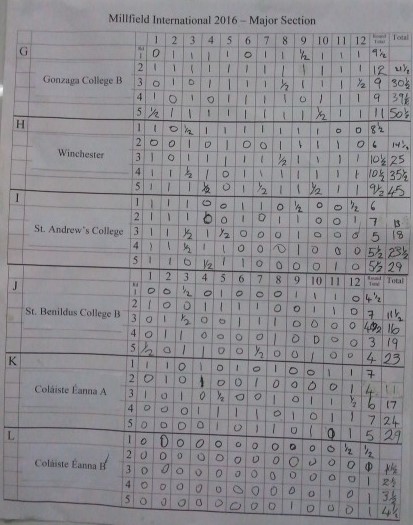