My Dad, John, was a keen chess player when he was younger and he taught my brother, Malcolm, and I to play before we were even primary school age. In fact, to encourage us he offered one pound to the first one of us to beat him in a proper game. Malcolm won the pound and I was so upset, especially since Malcolm is two years younger, that Dad had to let me win the next day and give me a pound too. Curiously, Malcolm never took chess seriously while I'm still trying to prove something 40 years later.

Chess didn't figure much in my life again until I joined the chess club at Bangor Grammar School at about age 13. On one of my first visits to the club I remember not being able to mate with King and Rook against lone King and the local "expert" having to show me how it was done. Apart from the school club, I also played a lot of chess with a young friend called Robert Jackson (I wonder what became of him) and later, when I joined the Bangor Chess Club, with Ron Henderson (who still plays for them).

One of the reasons I liked chess was because it was esoteric. Other boys played football, rugby, hockey or golf or were getting involved with girls but for some reason I just had to be different. For example, most of the other pupils were keen supporters of Manchester United football club. So who did I support? Manchester City of course. Chess was almost as unpopular as Manchester City which suited me fine. I was also quite shy and the solitary nature of chess fitted in from that perspective as well. If I'd been born in 1965 instead of 1955 I would probably have become a computer geek. My wife says I'm one of them as well.

It was the Fischer-Spassky match of 1972 which really hooked me on chess. After that I started taking it seriously and adopted some of the openings favoured by Fischer (1.e4 as White, the Najdorf Sicilian and Modern Benoni as Black). I played my first big tournament in a junior section of the Teeside Chess Festival (organised by the late B.H.Wood, founder of Chess Magazine) in 1973. Some bespectacled, pimply youth criticised me for just trying to copy Fischer and promptly blew away my beloved Najdorf but my enthusiasm was undaunted.

As a bit of a late starter I missed out on most of the junior chess scene (I didn't play in any Glorneys) but I won the Ulster Schoolboy's Championship in 1974. Some of the other top junior players of that era were Paul Hadden, Chris Parkes, A.D.Speed and P.D.Winslow but I haven't heard of them since and I guess they must have given up chess after leaving school. 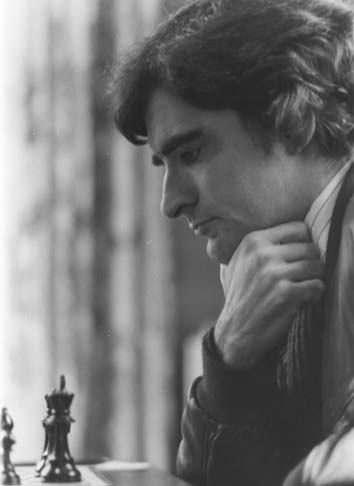 One other geekish interest I had in those days was astronomy, thanks to Patrick Moore, the television astronomer. None of the Irish universities did a full degree in astronomy so I choose to go to Edinburgh, where they did, and later Jodrell Bank near Manchester, for a PhD in radio astronomy. I was happy enough at the time to get away from home however, because of the way things turned out, I never returned to live in Northern Ireland. Now that I'm older I rather miss it but hopefully someday I'll be able to go back.

University gave me plenty of time to play chess and I started getting a bit better. Between 1974 and 1981 I played local league chess in Edinburgh and Manchester, lots of weekend tournaments, a couple of Junior Internationals, two Irish Championships (1976 and 1979), three Scottish Championships, the Hastings Challengers and an international open in Manchester (the Benedictine). At the end of all that it's a wonder I wasn't better than I was but although I had plenty of enthusiasm I had no real goals or any sort of training discipline. If I'd been a bit more mature (it came all to late in my case, or never according to some) or if I'd had a coach then some of that energy could have been better focused.

In 1982 I married a girl I'd met at a Scottish chess tournament. The following summer we played in an Italian chess festival in a small village called Bratto situated somewhere in the mountains north of Milan. It turned out quite a success for both of us. I came second in the open and she came second in the beginners.

However, the main significance of Bratto was that it gave me my first International Master (IM) norm. It was something I wasn't expecting at the time, indeed it was a while before I realised I had one, but once I did I resolved to try to get the other two norms required for the title. In the following years I played in quite a few more international opens, sometimes coming very close to another norm, but by the spring of 1988 I still only had the one and it was due to expire in a few more months.

To try get two more norms I decided to take some time off work and arranged to play in three tournaments: the first an all-play-all in Egilstaddir (Iceland), the second a Swiss in Edinburgh and the last a Scheveningen in Haringey (London). Things didn't start too well when I came last in Egilstaddir and was twice beaten by young girls (Polgars!). However, despite the cost of fish and chips (£14) I really liked Iceland and will always remember that tournament with fondness.

Edinburgh was better, I got a norm, and Haringey started okay but I had a lot of draws and by round 8 I still I needed 1.5 points from the last two games. In the first of these Malcolm Pein outplayed me in both the opening and middlegame and my prospects were looking distinctly bleak. So I was sitting there, my position in tatters, barely seconds remaining on the clock, cursing myself and thinking it was all over when suddenly and miraculously Malcolm blundered into a mating net.

That more or less wrapped up the title because in the last round my opponent, after checking it was for a final norm, and not just any old norm, graciously offered a draw before the game. He suggested we play a line in the Ruy Lopez which leads to a draw by repetition. With hands shaking, and slightly worried that I was getting duped because I don't normally play the Ruy Lopez, I played out the sequence and was relieved when the position was repeated three times. I practically skipped all the way back to the hotel that night.

The greatest enjoyment I've had in chess is playing for Ireland in the biennial Olympiads. It's great to play chess for three solid weeks and see a different part of the world.

I find playing on top board pretty tough so, not surprisingly, one of my better Olympiad performances was in Novi Sad 1990 when I was on second board, and in the last round I had a nice win against Paraguay (I always seem to do well against Paraguayans for some reason). In Yerevan 1996, again on second board, I had a more up-and-down sort of tournament, and this up-and-down (but memorable) sort of game against an Ecuadorian IM.

Just before the start of a round in the 1985 British Championships I was browsing through a chess magazine and came across an article by Jim Walsh which described my style as "boring". At the time I was a little upset at the comment but it worked wonders for my game that day and in the end it was my poor opponent, and not I, who felt the most aggrieved.

The truth, however, is that J.J. wasn't entirely wrong in his assessment. I mentioned earlier that I had started off as a Fischer clone, playing an aggressive style with 1.e4 as White, and the Sicilian and Benoni as Black. However, in my mid-twenties I'd started to drift into a more conservative style based on 1.d4 as White and the Caro-Kann and Queen's Gambit Declined as Black. I attribute this to the gradual exposure of the real me who doesn't like the emotional stress of taking risks early in the game nor the drudgery of learning opening theory.

Nowadays, I try to play a little more adventurously, even if it means occasionally playing openings I'm unfamiliar with. My first outing with the Accelerated Dragon is my most spectacular win yet. I've also had some success with the Trompowsky (for example against Parker and McShane). Analysing my own games with computer programs like Fritz has been quite a shocking experience but suggests that many games could be decided (or are decided) by unexpected tactical shots, so perhaps opening knowledge isn't that important anyway. 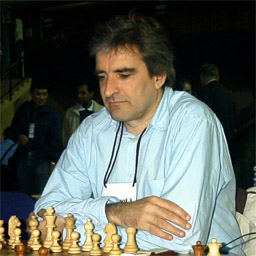 I started a website, The Irish Chess Archive (TICA), in 1997. It combined my interests in chess and computers. Initially the idea had been inspired by hearing Arthur Pinkerton reminisce about a famous player from the past (Wolfgang Heidenfeld) during the 1994 Irish Championships. I knew next to nothing about Heidenfeld, though had heard the name mentioned, and wanted to find out more. Eventually I started gathering information about other names from the past and then contemporary players as well, though members of this latter group are often infuriatingly reticent about talking about themselves. It started as a book project but then became a web site. One advantage of a web site is that it can be continually updated (as this article has been since it started in 1998).

The ICU commissioned me to develop this official ICU site around 2004. TICA was retired (and for several years the domain no longer belongs to me, but that's another story) and most of its material (such as the article you're reading now) was moved over to the new site. The new site has some features that TICA lacked such as online ICU subscriptions, ratings data, user logins, an event calendar, information about Irish chess clubs and an administrative section for ICU officers.

In 2006 I became rating officer with the intention of improving the ratings data available to ICU members. This eventually led to the creation of a modern web app, ratings.icu.ie, to replace the desktop app which had been in use since 1999 and revolutionised not only the display of data for members but also the administrative tools for the rating officer. Jobs which used to take a whole evening of clicking buttons, selecting files and dismissing popups using the desktop app were reduced to a single button push with the web application.

You can read more about the ratings site in this article.