The Bunratty 2017 event was the 24th in the series, and was a great success with over 330 players participating in the 4 tournaments. 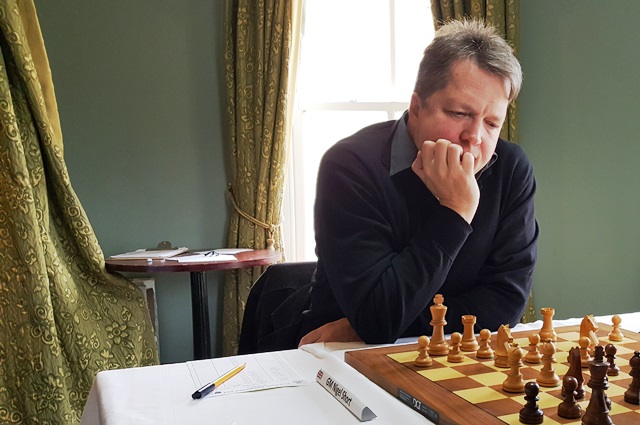 The top seed in the Masters was the returning champion, Nigel Short but there were quite a few strong players planning to thwart his attempt to replicate Peter Svidler and Micky Adams's record of the only players to retain the title of Bunratty Masters Champion.

Chief among these was Jontahan Speelman, a man with whom Nigel has played no less than two matches in the qualifying stages for the World Chess Championship 1990 and 1993 cycles, they won one each. Mark Hebden, Bogdan Lalic, Alex Baburin and Peter Wells were the other grandmasters who would have their say over the weekend’s play, all previous Bunratty Masters winners with the exception of Peter Wells. Though Peter has come second on a number of occasions, he’s yet to win the title, an issue he was here to remedy.

I can’t proceed to talk about the Chess event itself without mentioning the opening ceremony, usually if one is held at all at Bunratty, it’s always been a very small, short affair. Not this year though, the Limerick Musical Society’s stars of their upcoming production of “Chess” came along to give us a few songs from the musical and this went down very well. The cast of the show were very impressed with the layout of the Chess event and the players themselves really enjoyed the performance. Their show is on in the University Concert Hall in Limerick and runs from March 30th to April 1st.

Down to the Chess, the first round in the Masters went pretty much to seeding, but not all. On board 11, Alina L’Ami ( 2324 ) lost to David Murray of Gonzaga while on board 19, Peter Cafolla held Killian Delaney to a draw. On board 3 there was a repeat pairing of Mark Hebden with Henry Li ( a repeat from the recent Kilkenny Masters where the young Henry scored a famous victory over the wily Grandmaster ) which raised a few eyebrows. Henry was unable to repeat the giant killing of last November though, as can be seen in the game here. 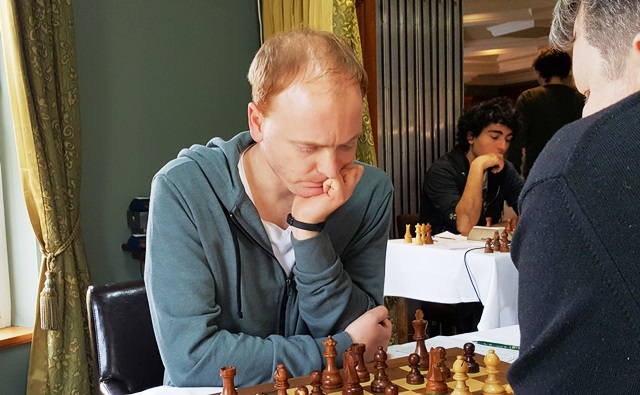 There were five “Shorts” in the playing hall for the first round, and all 5 of them won. For those who’re not familiar, these are Nigel and Philip Short, both in the Masters, Jack, Don and Stephen Short, all in the Challengers. Nigel is not related to the others but the four other Shorts are brothers.

The second round pairings for the top boards in both the Masters and Challengers raised no end of Short jokes. Top board in the Masters, Philip Short vs Nigel Short, top board in the Challengers, Stephen Short vs Jack Short, all on live boards. Poor Don drew the short straw ( sorry ) as he was the only Short not on a live board. Both Nigel and Jack won the “Short” battles while Don won his game in round 2 to end up on the second live board in round three.

English IM Adam Hunt ( pictured right ) was paired against Nigel Short in round 3 and the following exciting game resulted. This left Nigel on 3 / 3, but he was not alone on this score, Bogdan Lalic, Peter Wells, Alex Lopez and Richard Bates were also on maximum going into the 4th round. The top boards draw for the 4th round looked like this;

Richard Bates has a great record at Bunratty, often the bridesmaid, he's never won it but comes second or joint second on nearly every attempt. He obviously wants this to continue as he beat Mark Hebden in this round. I don't have this game yet but I will add it sometime over the next day or two as it has a very instructive ending. Alex Lopez tore through Bogdan Lalic in a nice attack, while Nigel beat Peter Wells in this game. 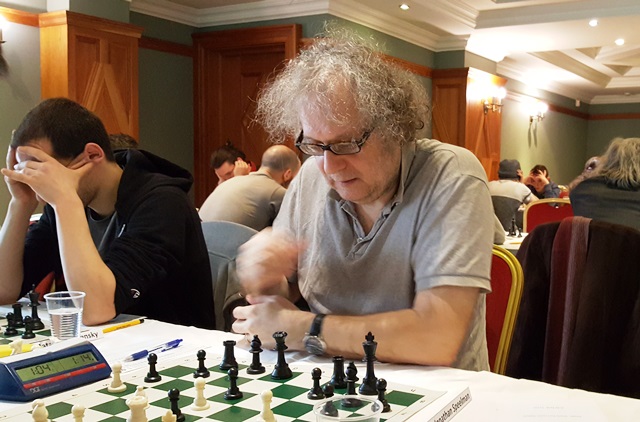 Pictured above is Jonathan Speelman, the famous English Grandmaster, finding the pace of a 6 round weekender a bit tough.

The draw on the top boards for the fifth round looked like this;

Bogdan Lalic outplayed our visitor from the USA, Matan Prilleltensky in the following game. Matan was not only having a good event, he was also impressed with the Irish Chess scene. This was the Marshal Chess Club members's first Bunratty but I suspect it won't be his last. 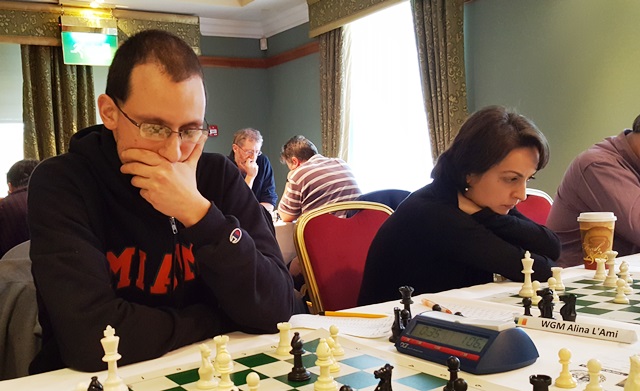 This is a picture of our Marshal Chess Club member, Matan, playing in his first Bunratty Masters ! On the next board is WGM Alina L'Ami, who will be doing a far better report than this one on the Bunratty Masters for Chessbase so keep any eye out for this. Alina is not only a great Chess player, she is also a great photographer and I'm sure her Chessbase report will have a lot of great images.

Richard Bates vs Alex Lopez was a game that almost went into overtime, it was a very tough battle and for those of you who want to play through it without knowing the result, here is this exciting game.

Nigel Short got the better of Alex Baburin in an interesting ending, the game can be seen here. This left us with two Shorts on maximum points going into the last round, Nigel, plus the leader in the Challengers, none other than Don Short. You may remember this name, he was the only Short not on a liveboard in round 2!

Richard Bates continued his fine form in his board 3 game against Jon Speelman while there was a relatively quick draw on board 2, but I think, at least for me, the game of the event was also the game that decided the title, the titanic struggle on board one between the defending champion, Nigel Short, and the inform Irish IM, Alex Lopez. I suggest you take out a board, grab a drink of whatever your having yourself and play through this great game 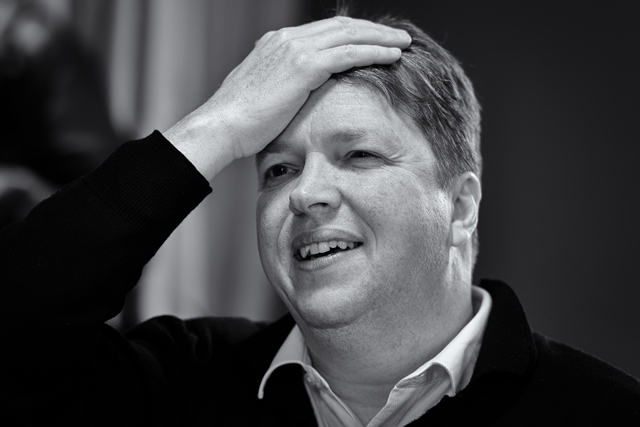 A lovely portrait of a delighted, and slightly relieved Nigel just after retaining the Bunratty Masters title on 6 / 6. Thanks to Alina L'Ami for this fine photo. 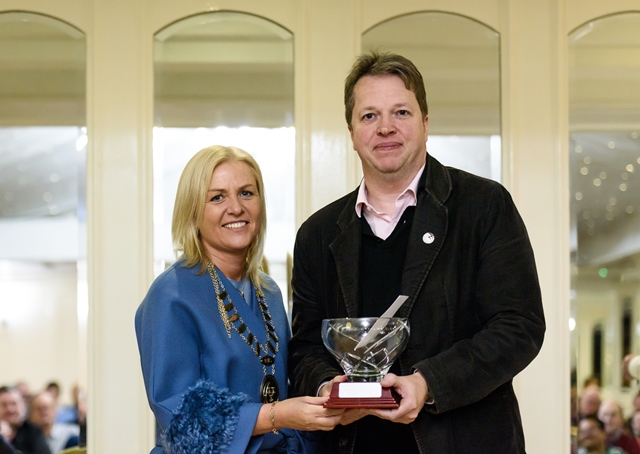 Nigel Short GM is presented with the trophy by Cllr. Ann Norton, Mayor of Ennis at the closing ceramony of the Bunratty Chess Festival. Photo by Alina L'Ami

This year was the 24th Bunratty, next year will obviously be the 25th and a special event is planned. The dates will be 23rd to 25th February 2018 and we hope to see you all there. I'll leave you with a few more images to enjoy. 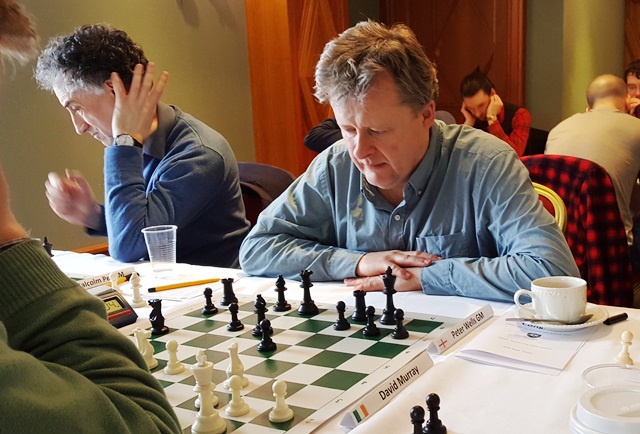 Peter Wells GM from England, a regular at the Bunratty Chess Festival. On the next board you can see Malcolm Pein 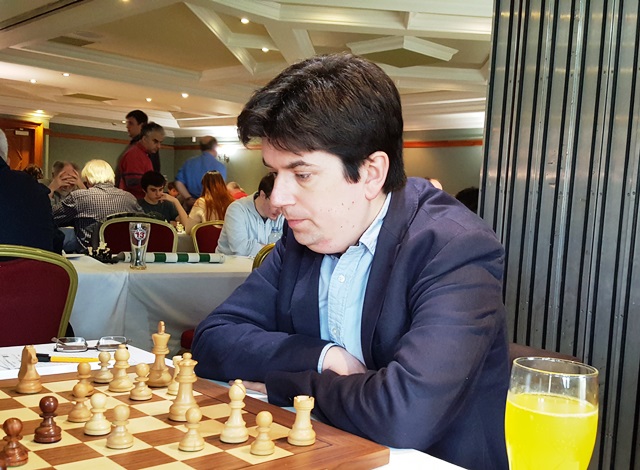 Richard Bates IM, also from England, and also a regular at the Bunratty Chess Festival 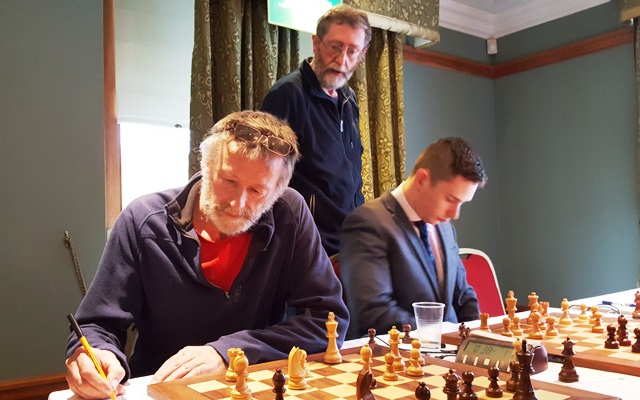 Seated is Don Short, playing the final round of the Challengers, being watched by his brother, Stephen Short