The 41st Kilkenny Chess Congress got underway on Friday November 17th and the main event was the Kilkenny International Masters, probably the strongest ever in the series. It was hosted by a new hotel, the Ormonde Hotel, pictured above, just 100 metres from the Clubhouse and I must say, I hope this move is permanent. The players loved the Ormonde Hotel, a really nice venue for the Kilkenny International Masters.

It featured no less than 6 grandmasters, 3 international masters and a few FIDE masters too among its 32 competitors. Top seed, and leading the French contingent was Matthieu Cornette, with a really impressive FIDE rating of 2606 ( pictured below ) His compatriot, Sebastien Maze followed closely behind at 2595. 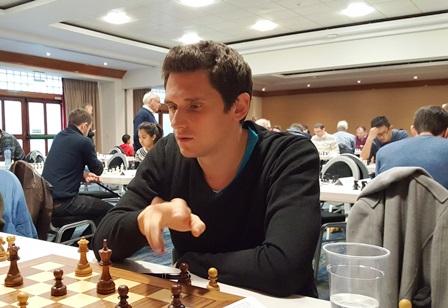 Jean Pierre Le Roux at 2553 and Jean Noel Riff at 2512 were the top 4 seed, all GMs and all from France. Jack Lowry, the organiser of every one of those 41 Kilkenny Congresses, assured me that the young ladies of the town of Kilkenny had been warned of the arrival of the French group, not sure if that helped or hindered them on their nights out in the town or not though.

Bogdan Lalic and Alexander Baburin were our non-French GMs and among the IMs playing were Mark Heidenfeld and our visiting player from Chile, Alvro Valdes Escobar.

Play began at 8:00pm sharp and the top 3 boards were being transmitted live on the internet from the fabulous new venue, The Ormonde Hotel. All the game went more or less to seeding with one notable exception, Stephen Moran of Trinity Chess Club beat the Irish IM Sam Collins. David Murray had the "pleasure" of giving our top seed his first test, you can see how that went here.

There was an amusing feature of the game on board 3, Jean Pierre LeRoux GM was white against Carl Jackson. Carl is one of the originators ( or maybe even the sole creator ) of the Kilkenny Gambit, a dangerous gambit line for white against 1.d4 Nf6. To get some backgound to this opening, click here. Obviously his higher rated French opponent knew this very well and after the opening moves 1.d4 Nf6, what do you think he played? Click here for the full game.

Bram Van Dijk, one of our regular Dutch visitors managed to hold FM Stephen Jessel to a draw while Anthony Fox of Dun Laoghaire held Paul Wallace to a draw on board 13.

Round 2 began at the early time of 9:30am and on board 1, we had our first all master clash, Alvaro Escobor ( pictured right ) had white against Matthieu Cornette and certainly our IM visitor from Chile seemed to be gaining a small advantage and pile on some pressure but Matthieu found enough resources in the position to force the draw. Meanwhile, on board 2, a really hard battle was taking place between Sebastien Maze and Conor O'Donnell, I won't spoil the surprise, see the game here. Tom O'Gorman was white on board 3 against Jean Pierre LeRoux and under severe time pressure, the French GM may have let a win slip, see what you think here.

Round 3 saw our first all GM clash and almost immediately, saw our first all GM draw ! Jean Noel Riff and Sebastien Maze met on board 1, but not for long as they recorded a 6 move draw, forgive me if I don't publish this game. Meanwhile, on board two, another all GM clash was actually taking place, Matthieu Cornette had while against Bogdan Lalic and Matthieu made his intentions very clear from the start of this game! As the GingerGM would say, push "Harry", sac "Harry", sac more if necessary because mate is the aim of the game. Bogdan wasn't having any of this and steered the game to quieter waters, this game can be seen here. 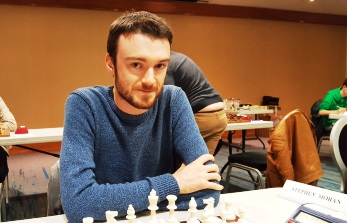 On board 3, Jean Pierre Le Roux had white against Stephen Moran ( pictured left ) and this game might have started out in the quieter waters but it sure got a bit rough after a while, you can view this game here.

On board 8 in this round, FK Akshaya Kalaiyalahan of England ( 2026 ) beat Conor O'Donnell while Stephen Jessel chalked up his first win of the event at the expense of Stanley Yin.

Local player, Karl McPhillips beat the current ICU chairman, John McMorrow on board 10 and when all the results were in, the 4th round draw top tables looked like this;

Board 2 turned out to be a quick GM draw, neither play wanted to take a risk in their third game in the same day. The board 3 game certainly lasted a bit longer ( 16 moves ) but the top board players were giving it a go, at least for a while, but a draw was agreed there too in 23 moves. This left the chasing pack a chance to catch up, and Stephen Jessel scored his second win in a row to join all the top players on 3 / 4 and Sam Collins did the same.

This left 8 players on 3 / 4 going into the 5th round and the top boards of this round looked like this;

Pictured right is French GM Jean Pierre Le Roux, looking very happy, he probably hasn't yet heard what time the next round starts !

The 5th round began at 9:00am and most Chess players do not enjoy such an early start ! 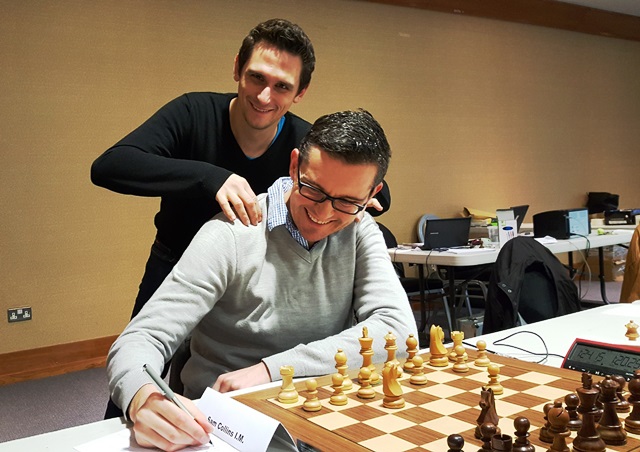 Some need to be prepared for the long game ahead at this early hour of the morning, so our top seed, Matthieu Cornette decided he'd help our own Sam Collins to get ready for his game against Sebastien Maze ( pictured left ). That particular long game, on board 1 lasted all of 8 moves.

The other players tied on 3 / 4 were in no such peaceful mood, there were real games on boards 2, 3 and 4. The first of these real games to finish was Baburin vs Lalic on board 4 where a Catalan opening went a little wrong for Bogdan and Alex managed to press for the full point.

On board 3 this morning, Jean Noel Riff had white against Stephen Jessel and a sort of hybrid queens pawn opening gave us a rich position with White having the centre while Black had a queenside pawn majority but this was no ending, most of the pieces were still on the board. Getting in to his usual time trouble, Stephen managed to put himself under as much pressure as his opponent did in this game and lost.

This left the board 2 game fighting to see if anyone else could join Baburin and Riff on 4 / 5. Despite going for over 60 moves, neither Le Roux nor Escobar could do any better than share the point and so the top boards going into the final round looked like this;

It shows just how good a tournament Carl Jackson is having, 3.5 / 5 with a rating performance of 2330 with a good few titled players on the boards below him in the final round.

Not for the first time in this event, the top board was a quick GM draw leaving both players on 4.5 / 5. This meant that up to 3 more players could now join them on this score so all eyes were on boards 2 to 4.

Carl Jackson put up a brave fight on board 3 with black against Sebastien Maze but the gap of nearly 500 points was too much to bridge and so, Seb was the first to join Alex and Jean Noel on 4.5 / 6. You can see this game here.

The next top board game to finish was Alvaro Escobar vs Sam Collins and it was Sam who emerged with the full point here, also joining the lads on 4.5 / 6. This result was followed very quickly with Matthieu Cornette's fine victory over Jean Pierre Le Roux, which can be seen here.

This left a 5 way tie for 1st place, this and all the other results from the Kilkenny International Chess Congress can be seen below. 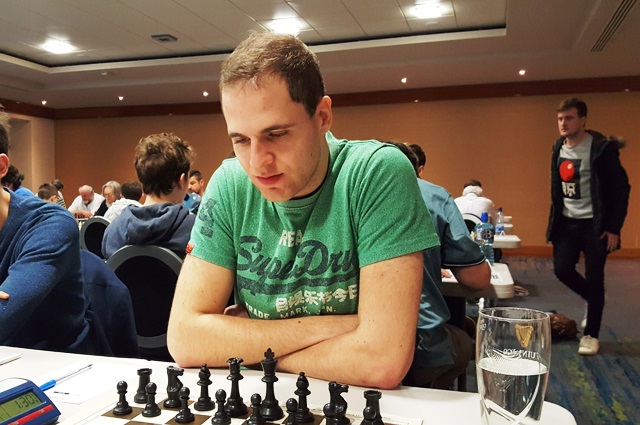 Kilkenny Major Champion 2017, Anthony Bourached. If Anthony plays Kilkenny 2018, I think we can all expect him to be in the Masters competition. 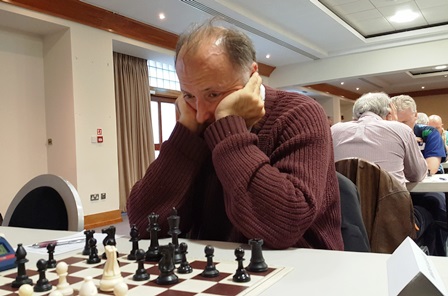 Bogdan Lalic, a Grandmaster originally from Croatia, now living in Hastings, is a regular visitor to the Irish Chess circuit, seen here at this year's Kilkenny International Masters. 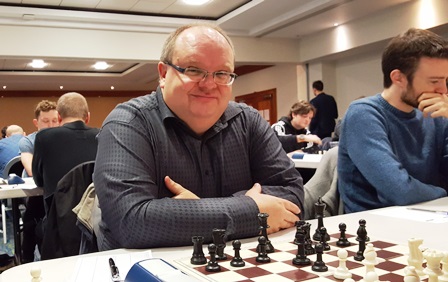 Mark Heidenfeld doesn't get back to Ireland to play Chess as much as he'd like so it was good to see him at this year's Kilkenny International Masters. 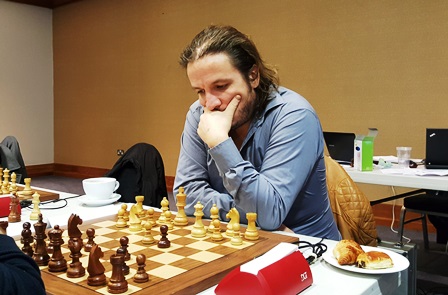 What do French GMs have for breakfast? Have a look and see, here is Jean Noel Riff enjoying breakfast at the start of round 5 - yes it's coffee and croissant.

Sebastien Maze just before his "marathon" game against Sam Collins in round 5, he's well prepared for all 8 moves! Notice Seb's sporting his very own Kilkenny Jumper ! 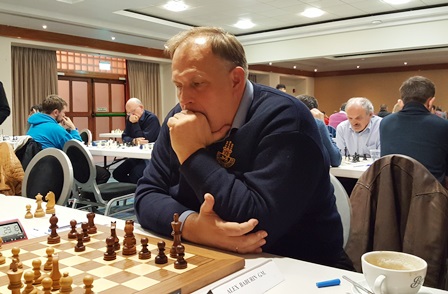 Alexander Baburin also has one of his own, coveted Kilkenny Jumpers and he sported it to good effect in round 5 when he took joint lead of the Kilkenny International Masters 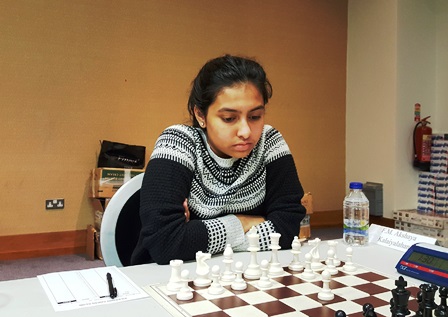 Adding a little style to the competition, as well as her not inconsiderable Chess talent, FM Akshaya Kalaiyalahan, England, on her first visit to the Kilkenny International Masters 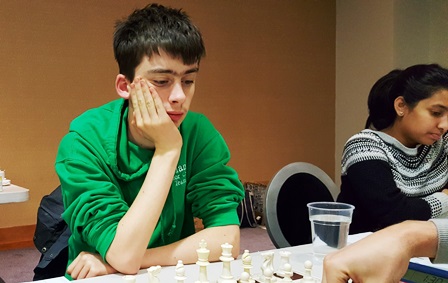 Mention should really be made of the O'Gorman family, they obviously like to spread them selves around as evenly as possible. Above is FIDE master Tom O'Gorman, playing in the Masters, his sister, also an International player, Alice played in the Major. Their father, Brian played in the James Mason and their mother, Pippa, played in the Challengers. How's that for family commitment!

I was told a story at this year's Kilkenny Congress, two young ladies were at the reception desk of a certain hotel when Sebastien approached and asked in his lovely French accent for the key to his room. Not sure if it was mainly his accent or his obvious good looks but after they'd given him the room key, they were heard swooning and giggling. I wonder what they were saying, eh?