The 2018 Bunratty Chess Festival was a record breaking event in many ways but mainly in having the highest number of players across the 4 events in it's history, almost 360 players battled for the 4 titles at stake. In the Masters event we had many past champions playing, they included this year's top seed and defending champion, Nigel Short GM as well as the second seed ( and the 2011 and 2014 champion ) Gawain Jones GM. Our third seed was Luke McShane GM, who won the event in 1997 when he was just 14 year's old ! All in all we had 8 past champions playing in the total field of 55 players in the Masters and as we will see, the lower rated players certainly had their say in this very competitive event.

But before the play began, a party was arranged in the Tournament Director's home, the host Paul Carey threw what all the attendees agreed was a fantastic event. It happened on the Thursday night and was enjoyed by many of the players in the Masters, it was well covered on Twitter by Fiona Steil Antoni and Diarmuid Scully ( the PRO of the event ) Top seed, Nigel Short entertained us with a few songs on the guitar, much to the delight of attending guests.

But, of course, none of this would be possible without our sponsors, the two main sponsors being Blackthorne Transport ( Gary O'Grady's company, Gary himself played in the Challengers ) and the host hotel, the wonderful Bunratty Castle Hotel. Without the support of both of theses, there would be no Bunratty and the organisers are very grateful to have them on-board.

As a surprise for each and every one of the participants, a book was produced detailing the history of the Bunratty Chess Festival because this was it's Silver Jubilee event, and yes, there was one for everyone in the audience. This was a nice touch, much appreciated by the players. 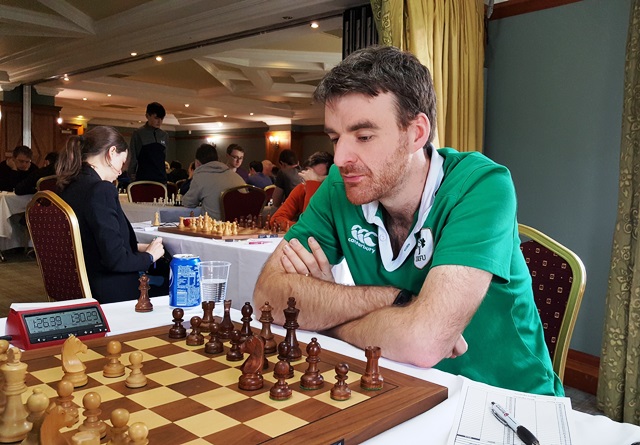 There were a number of "upsets" in the first and second rounds, the top seeds certainly had a tough time of it in the early part of the Masters. Nigel Short came up half a point short of his expectations when he was held to a draw in round 1 by Killian Delaney in the following game.

Malcolm's son, Jonathan Pein, who's rating seems to have shot up along with his height in recent years, put up some strong resistance against Luke McShane but in the end, Luke was just too strong for him in this round 1 encounter

However, round 2 didn't go quite as well for Luke as round 1 as our visiting Russian WGM, Dina Belenkaya, upset the odds in this game

Irish IM, Sam Collins didn't have it all his own way in round 2 either, he lost to English FM, Tim Wall in the following game

Gawain Jones had no such difficulties in the early rounds, progressing to 2 from 2 with a win over our visiting Swiss IM, Alexandre Vuilleumier. Gawain is pictured left sporting an Irish rugby jersey, obviously supporting the Irish team in their Six Nation's encounter against Wales. His support obviously helps as Ireland moved to 3 / 3, one step closed to the 2018 Grand Slam !!

Gawain's round 3 game was a very different matter, he had the black pieces against Malcolm Pein and for much of the game he was under severe pressure. Malcolm did however, go wrong ( according to the Silicon Monster Stockfish ) on move 35, he needed to extradite his Queen with 35.Qh4 instead of the the Rook check played, you can see this game here. 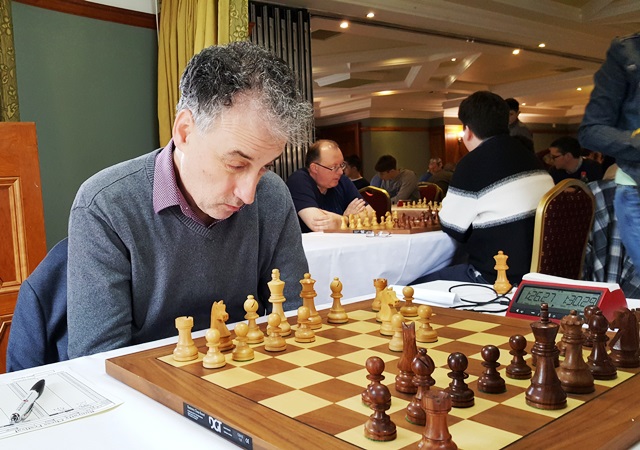 Malcolm Pein IM pictured very early during his game against Gawain Jones, from Malcolm's point of view, "The one that got away" !

Meanwhile, also as Ireland were beating Wales in the rugby, in the Major competition, Martin Kelly was anxious to watch the match and he was white against Desmond Martin. He was hoping for a quick draw so that he could enjoy the match, he got half a point more than he thought in this little miniature. 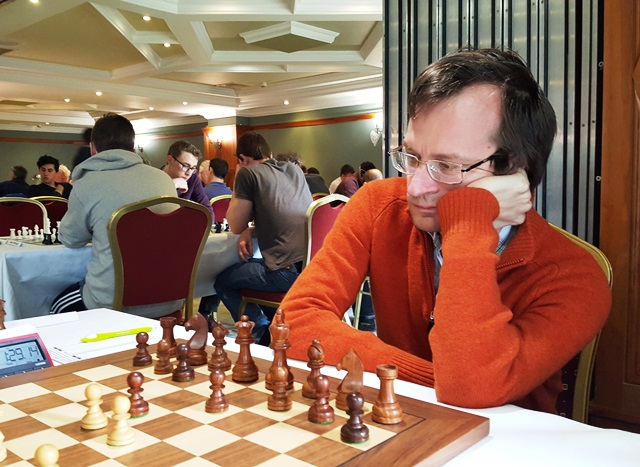 In the meantime, also in round 3, Sergey Tiviakov ( our 1999 Bunraty Masters Champion ) was a little too good for our young Russian WGM, Dina Belenkaya towards the end of this struggle. To the right is a picture of Sergey at the start of this game.

There was also a fine queen sac in our Australian IM visitors game in this round, you don't see many players sac their queens but in this event, we had at least three, here is J.P. Wallace's one, here is one from Jon Speelman, made against another player named Wallace, Paul Wallace and finally, just to round this section off, here's one more from Henry Li.

Nigel Short did not have the best start to his campaign to defent his title, his draw with Killian Delaney in round 1 was followed with another draw in round 2, this time with Henry Li. He finally got a win on the board in round 3 over Mihailo Manojovic, which gave him black against Malcolm Pein in round 4. After overcoming Malcolm in the following GAME, he'd fought his way back into the top boards.

Play began at the usual 9:15am, which was described by our "Ginger GM" Simon Williams ( 2006 Bunratty Masters Champion ) as a "God awful time to start a Chess tournament". Indeed, we had a few time defaulters for this round which is a little unusual. Usually they all do turn up, willing, if not quite ready to play. 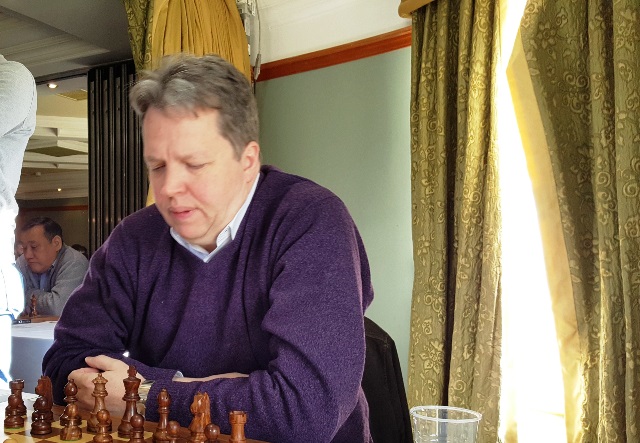 Nigel Short beat Thomas Rendle in a very smooth game, Nigel's only comment after the game, "Thomas didn't have to allow h5!". As if you needed to be told, Nigel is pictured left.

Sergey Tiviakov's game against Richard Bates put an end to Richard's hopes of finally getting his hands on the Bunratty Masters title, he's come 2nd place a number of times, but no better, at least not yet. This game was one of the shortest of the round, you can see it here.

Our top board encounter was an epic clash, full of wild tactics and but towards the end, Gawain started to take control, and with a flurry of wild complications, managed to secure the full point in this exciting game

Jonathan Speelman and Mark Heidenfeld played a 37 move draw while the top two board were fighting for the real money. Though many though that Sergey with the White pieces would be too much for Mark Hebden, Mark didn't think so and so it proved as they shared the point. On the top board we had a titanic struggle, Nigel did manage to win a pawn somewhere during the game but Gawain's endgame technique was up to the task of sharing the point a pawn down.

So we had a tie for 1st in the masters, so a blitz was hastily arranged between Sergey and Gawain, but amazingly enough, for the first time in it's history, all 4 events were shared! This meant we had 4 blitz battles to determine the destination of the trophies. You can see from the list of prize winners below exactly who won the crystal and the titles at the 25th Bunratty Chess Festival.

I shouldn't forget to mention that the traditional Bunratty Blitz took place on Sunday evening and it was truly great fun. The final was contested between Simon Williams and Luke McShane and after 3 games, Luke emerged the winner. One of the highlights of the fun blitz for me was watching Tom Rendle and Luke McShane playing one of the most bizarre games of Chess I've ever seen. Tom set up the White pieces in from of him while Luke set up the Black ones. Then they randomised the position of the pieces to produce a valid 960 position. The game started and Tom (seated at the White side) watched as Luke played 1.e4 ! and pressed the clock on Tom's side. Tom reached over and played 1....c5 and the mayhem continued. It was so weird watching Chess being played like this but even more troubling is the obvious fact that they were both well used to doing this !!!

My report above is a pretty basic report however some of the players who participated in the event have covered the Bunratty Chess Festival from an alternative point of view, that of a player. Their reports are far more entertaining and I'd urge any reader to check them out.

Simon Williams, the Ginger GM has two types of reports, one on Chess.com which you can read here and the other on Youtube, which is a very entertaining and instructive look at one of the crucial games of the event. I don't have the link to this yet but it's coming very soon.

Peter Doggers is the director of content with Chess.com and he also played in the Masters this year, you can read his excellent report here.

Fiona Steil Antoni also played in the event and she did a great Vlog detailing here Bunratty experience here.

Finally, although Macauley Peterson, chief editor of Chessbase news, did not play, here did attend and also wrote a great article for Chessbase, which can be seen here. 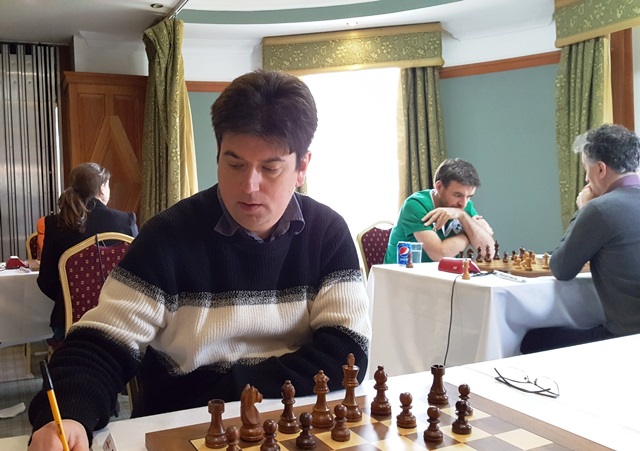 Richard Bates pictured just at the start of his round 5 game against our 1999 Bunratty Masters Champion, Sergey Tiviakov, Richard came second in this encounter ! 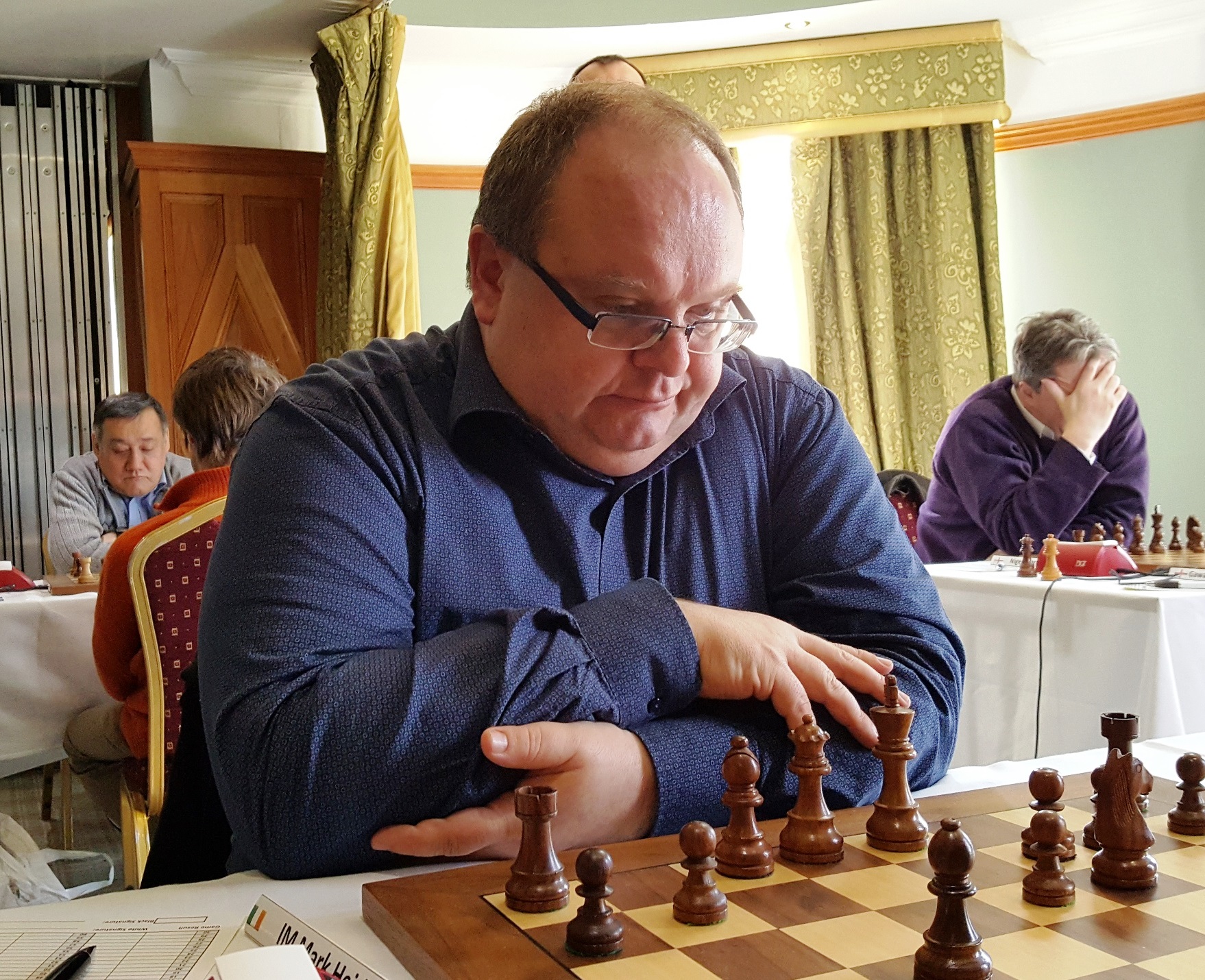 Mark Heidenfeld doesn't get back to Ireland to play Chess as much as he'd like so it was good to see him at this year's Bunratty Masters. 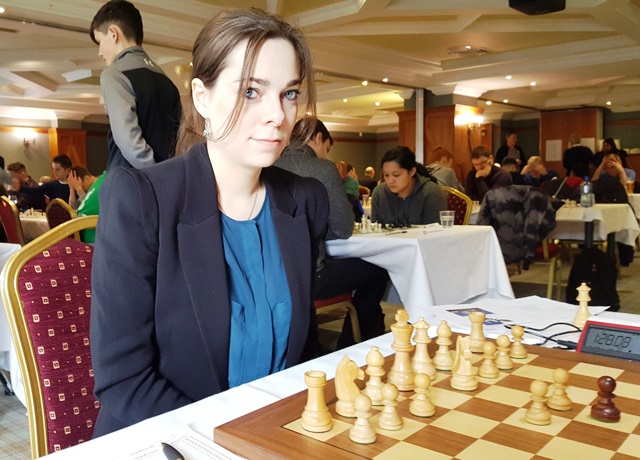 Dina Belenkaya, WGM from Russia, played a simul in Belfast the night before the Bunratty Chess Festival and was a very welcome debutante at this year's Masters. 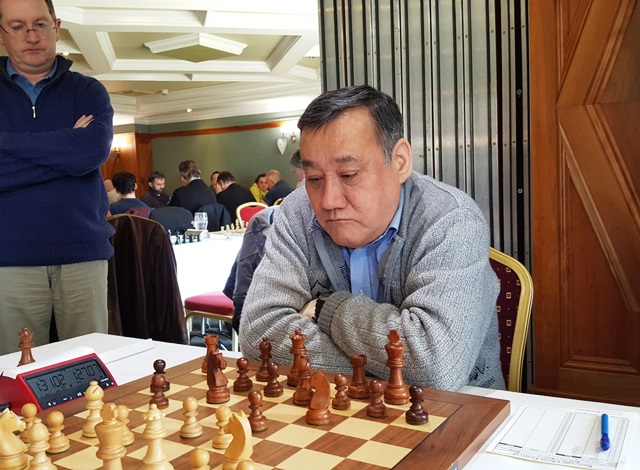 Mark Hebden begins his last round game as Martin O'Grady looks on, Mark's reward for his 5th round win, Black against Sergey Tiviakov. He doesn't look happy ! 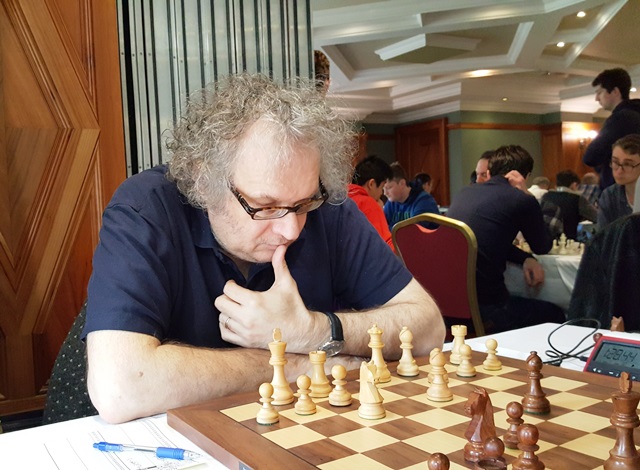 Jon Speelman, our 1997 Bunratty Masters Champion, pictured before his last round game against Mark Heidenfeld. Jon gave us our best Newspaper Article Headline in 1997 when he beat the defending champion, Danny King in a blitz play off. The following day, the local paper headline read " Speelman steals King's crown at Bunratty" 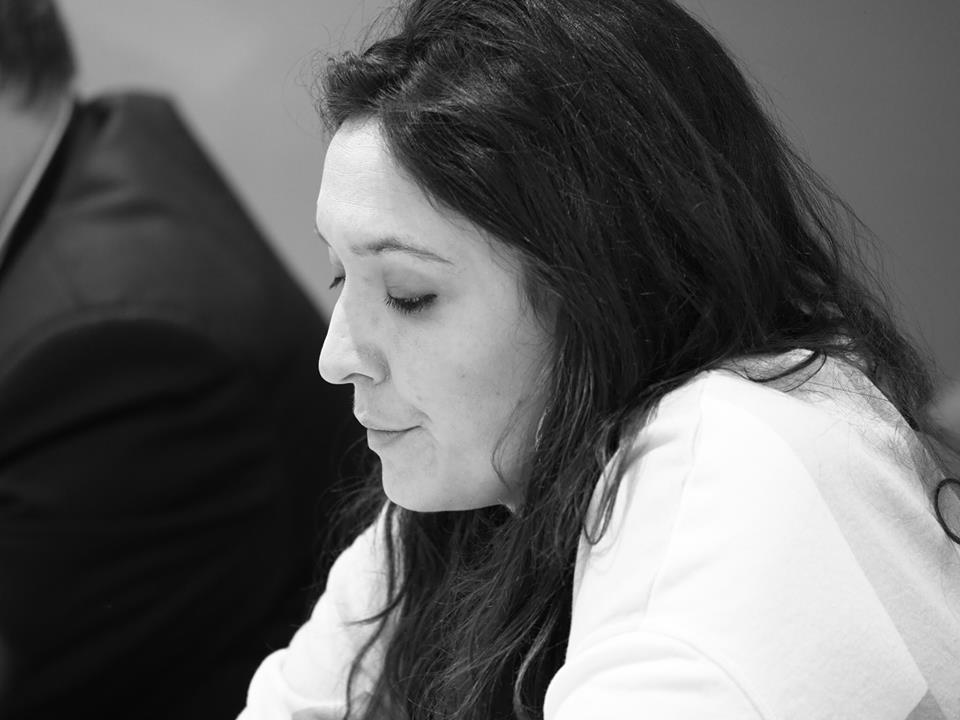 A lovely monochrome image of one of our star guests this year, Fiona Steil Antoni from Luxembourg. Followers of Fiona on Twitter can see a lot of images of the pre-Bunratty party. I must say thanks to Eugene Donohoe for the photo. It's one of many high quality images he's loaded up on Facebook from this year's Bunratty Chess Festival.

The Bunratty Chess Festival 2019 will be held from February 22nd to 24th and at over 360 players this year, we are very close to our comfortable capacity. We may have to cap the event so, start planning early and I hope to see you there.