The 26th Bunratty International Chess Festival kicked off on Friday evening, February 22nd with 346 players spread across 4 sections, our second largest field ever.

The venue for this event is the beautiful Bunratty Castle Hotel, which has been the tournaments home since 2010. Not many of the players had time to enjoy it's pool, spa and beauty treatments as the hectic schedule for the Bunratty includes 1 game Friday evening, 3 games on Saturday and 2 games on Sunday. 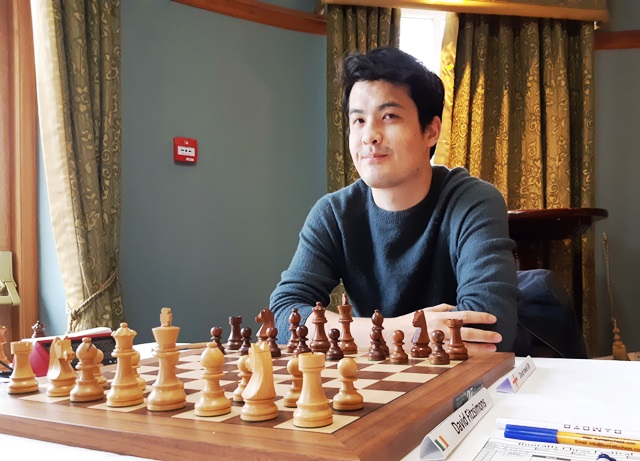 The Bunratty Chess Festival has to thank not only the lovely hotel which hosts the event, but also the main sponsor of the event, Blackthorne Transport's Gary O'Grady. Gary is not only our sponsor, he's also quite a strong Chess player himself, his latest ECF rating had him 2nd seed in the Challengers!

The top seeds in the Masters all seems to hail from the UK this year, and at 2689, this year's no.1 player was Super GM, David Howell ( pictured left ) As Gerry Graham noted in his opening speech, the last time David played Bunratty he was only half the height he is today ( 2003 I think but I'm sure someone will correct me ) We've long been asking David to return but the timing just never worked out, until this year. We were delighted to have such a high rated player top the seeds at this year's Masters.

Our second seed this year was our returning Bunratty Blitz Champion, Luke McShane ( 2663 ) who played a simultaneous chess display in Belfast the night before the event. This went very well, playing 30 or so opponents, losing one, drawing one and winning the rest. Luke McShane famously won the Bunratty Masters in 1998 in a Blitz play off with John Nunn. As a 14 year old at the time, he then had to catch a Sunday evening flight back to England to be in school for Monday morning !

Third seed and with a few Bunratty titles already to his credit was former World Chess Championship candidate, Nigel Short ( 2648 ) who's now a FIDE vice president and the only player to win a Bunratty Masters title on 6/6. Nigel played his first Bunratty in 2011 and has returned almost every year since. Nigel, in his "Short Stories" column in New in Chess kindly described the Bunratty Chess Festival as "The Rolls Royce of Chess Weekenders", we'll take that. 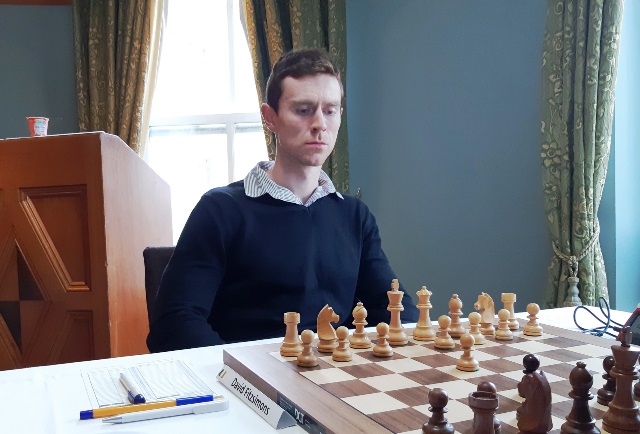 There were certainly a few other titled players to challenge for the top honours, as the other grandmasters included Matthew Turner ( winner of the recent strong Gonzaga International Masters ) the famous Ginger GM, Simon Williams, Alex Baburin, Mark Hebden, Bogdan Lalic and Peter Wells. There were also a few IMs to have their say, and these included Irish IMs Sam Collins, Alex Lopez, Mark Heidenfeld and Ireland's most recent IM, David Fitzsimons ( pictured right ) English IMs Richard Bates, Adam Hunt and Malcolm Pein were also joining the hunt for the title of Bunratty Masters Champion.

On board 1, David Howell beat Guil Machin ( France, 2161 ) in the following nice squeeze of a game. Nigel Short also won a nice game against Stephen Moran ( nicely avoiding a "Short" pun ) while the Ginger GM got off to a winning start against Shane Melaugh, you can see that game here.

While most games went to seeding, 3 games did not. Kieran Moynihan beat IM Alex Lopez, Peter Carroll beat IM Malcolm Pein while FM Gabriel Voiteanu from Romania beat GM Alex Baburin and you can see that game here In fairness, Gabriel played a very nice game at a level above his rating of 2121 might suggest. 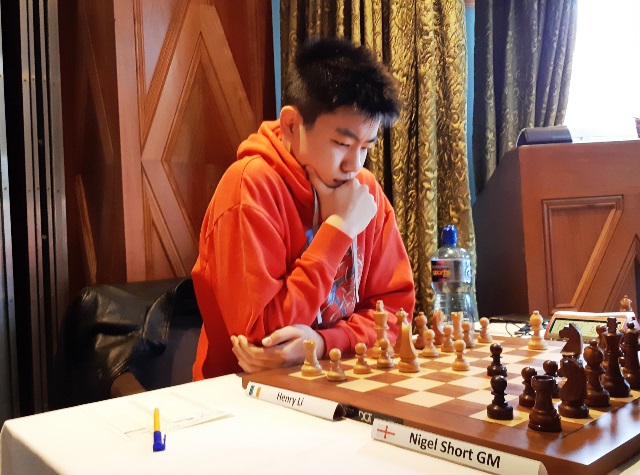 Round 2 began at 9:30am on Saturday morning and David Fitzsimons ( pictured above ) had white against our top seed, David Howell and despite the more than 370 pints in the difference between their ratings, things did not go as you might have expected, you can see the game here. Luke McShane was in a real tussle against Blair Connell on board 2, Blair had told me the night before that he was really looking forward to this game and he certainly gave it a good go, despite having a broken arm! You can see this game here.

Henry Li ( pictured left ) was facing Nigel Short on board 3 and Nigel was in no mood to let any fraction of a point slip, as can be seen here.

However, on board 5, the Ginger GM himself had a bit of a setback, I'm afraid. In an exciting wild game, having black against the young Irish FM, Tom O'Gorman he sacrificed material for attacking chances but Tom weathered the storm. This fascinating game actually features two under-promotions, you don't get that value for money every day.

On board 6, our unofficial PRO, Fiona Steil Antoni had white against Bogdan Lalic and managed to share the point in the following game.

Round 3 began on Saturday afternoon and there were a few bye requests to watch the Rugby, but not near the business end of the events. Our first all GM clash happened on board 1 when Peter Wells was paired against David Howell and what an exciting game it was. You've got to feel for Peter in this game, he had Luke within his grasp, Luke admitted after the game that he was probably lost at some point, but it's not enough to get a winning position against these top guys, you also have to beat them! This was the game that got away for Mr. Wells, enjoy.

David Howell got back to his winning ways in a fine game against Marijus Vicas ( 2324 ) while Nigel Short had a really nice win over Richard Bates. 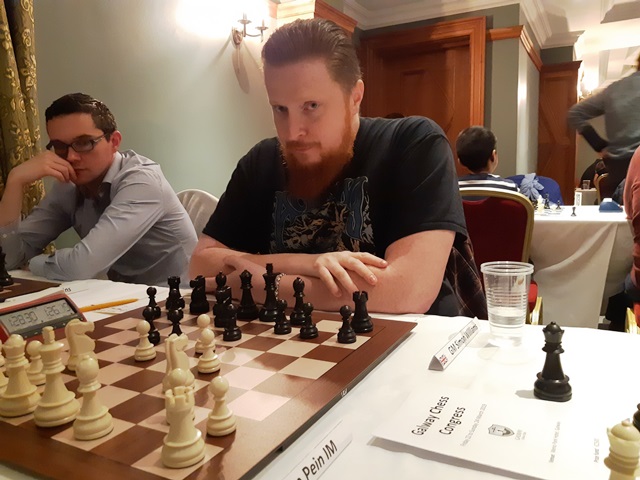 This left the top boards draw for the 4th round in the Masters looking like this;

Pictured left is the Ginger GM, Simon Williams at the start of his 4th round game against Malcolm, both fighting for a possible live board clash in the morning for crack at the top seeds. Remember, this 4th round is the 3rd round played in one day and before this round, a tired Nigel Short told me that there is a "special place in hell for the man that came up with the idea of 3 rounds in one day" !

GM Hebden came out on top in the clash of the Marks on board 3 while Luke and Nigel drew on the top board but Matthew Turner vs David Howell on board 2 was a real clash of the titans. Matthew was probably under a bit of pressure and David decided to "push" maybe a bit too hard for the full point, see what you think here.

The Ginger GM did beat Malcolm in this round while Blair Connell, who was having a great tournament up until this round, missed his chance to "finish off" IM Alex Lopez in the following Connell, Blair—Lopez, Alex. 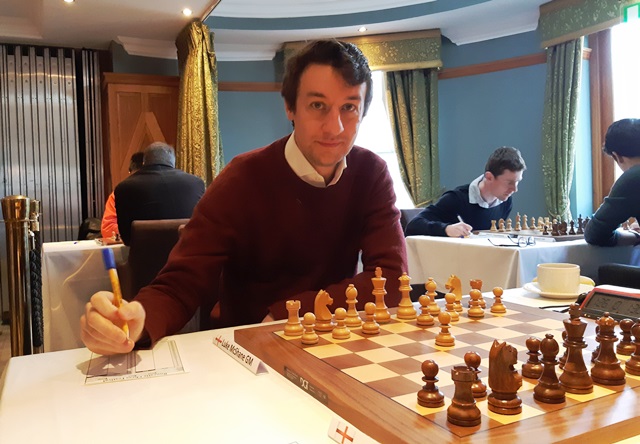 This left the 5th round pairings for the top boards looking like this;

Luke McShane ( pictured left ) enjoyed his second white in a row on top board 1 and it really didn't go too well for him during the game. However, the ending was played by him using mostly the 15 second increment only and, as he admitted after the game, he was very luck to survive it, and even luckier to win this facinating game.

Alex Lopez and Adam Hunt also drew their encounter on board 3 while David Howell proved far too strong for Ireland's newest FM, Henry Li in the following game.

This left Luke McShane was now in front on his own on 4.5 from 5 with 4 players tied on 4 / 5 in the chasing pack. The title of the Bunratty Masters Champion cannot be shared and if there is a tie for first place, the organisers would arrange a blitz play-off, ( the same will all the sections ) and, of course, this was a possibility as long as Luke McShane didn't wiin on board 1 in the final round draw. You can see this final round top 3 boards pairing below; 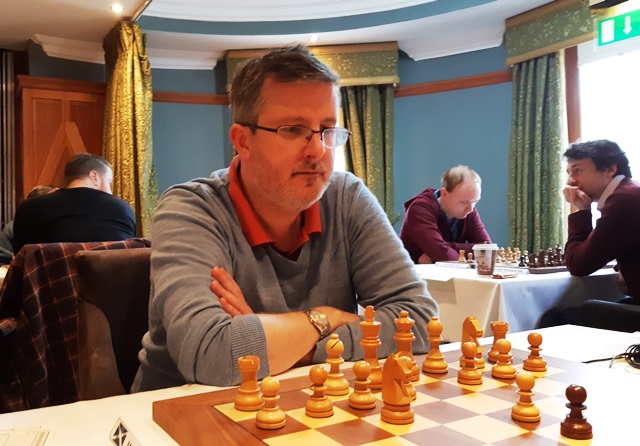 Matthew Turner's ( pictured right ) "reward" for his bad luck in the previous round was a meeting with Nigel Short, this was a relatively quick draw. In the background of this photo you can see Adam Hunt and Luke McShane about to play the deciding match for the trophy, more anon. In the meantime, on board 3, a resurgent Mark Hebden managed to beat Simon Williams in a nice game with a pleasing finish.

David Fitzsimons beat Alex Lopez in the final round, and Bogdan Lalic also manged to overcome the resistance of Richard Bates in this game.

Our top seed, Davod Howell beat Sam Collins on board 4 in this game while on board 1, Adam and Luke fought to bare kings in this epic encounter.

This left a blitz play required to decide the destination of the trophy in both the Masters and the minor. The Minor play-off was contested by Theo Wallace and Sean Horan and Theo won a closely fought game. The masters play-off required three games as the first two was drawn. Our 1998 champion won his 2nd Bunratty trophy 21 years after he won his first, Luke McShane beat Mark Hebden. 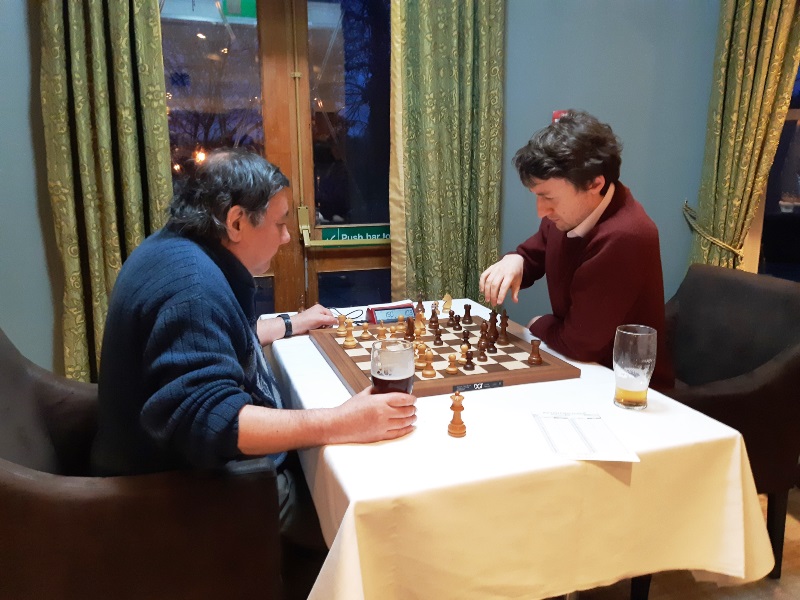 Bunratty Blitz play off, Bunratty style, with a nice pint by the player's side !

Grading prizes were won by David Fitzsimons, Jonatahn Pein and John McMorrow ( Chairman of the ICU ) 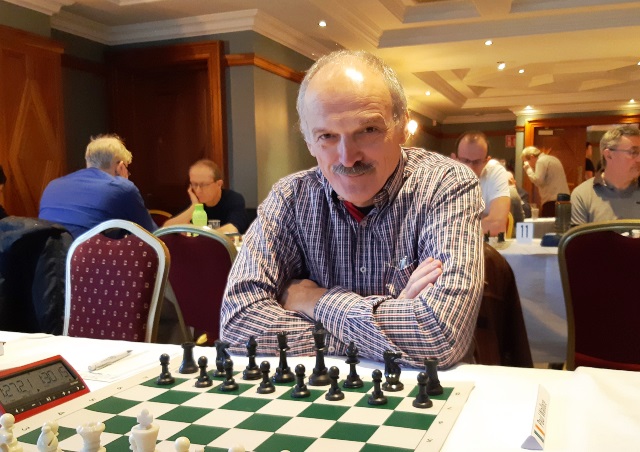 Paul Wallace, a regular visitor to the Bunratty Masters enjoying this year's event. 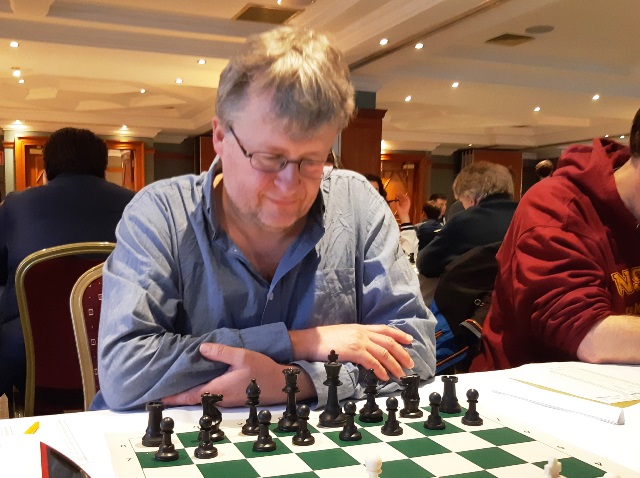 Peter Wells is another regular GM visitor to the Bunratty Masters, or as Raymond Keene would say, he's a PIG - Permanently Invited Guest! 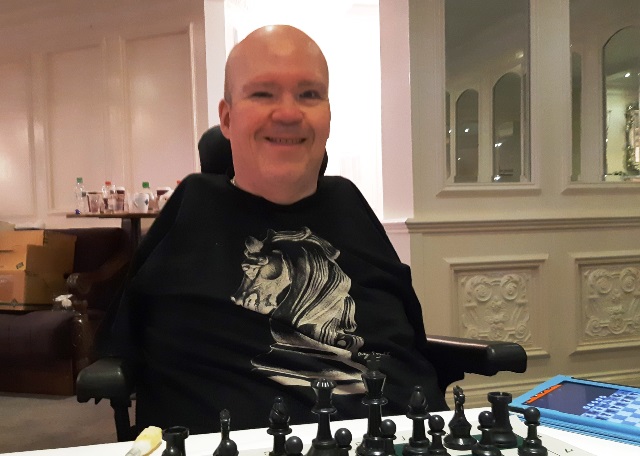 Paul Anderson comes every year from Northern Ireland to play at Bunratty, as did another 41 of our Northern Brethren, the largest group entry we get every year. 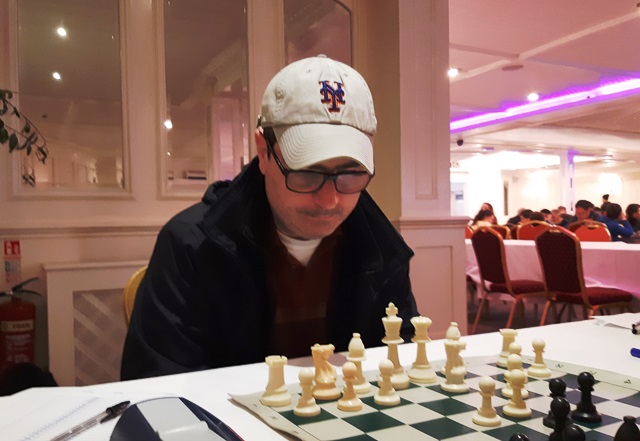 This is Kevin Grogan who came all the way from the US specially for this event. He heard about Bunratty from the Ginger GM Twitch Channel and decided to give it a go. He tells us he'll be back, hopefully with a few more clubmates. 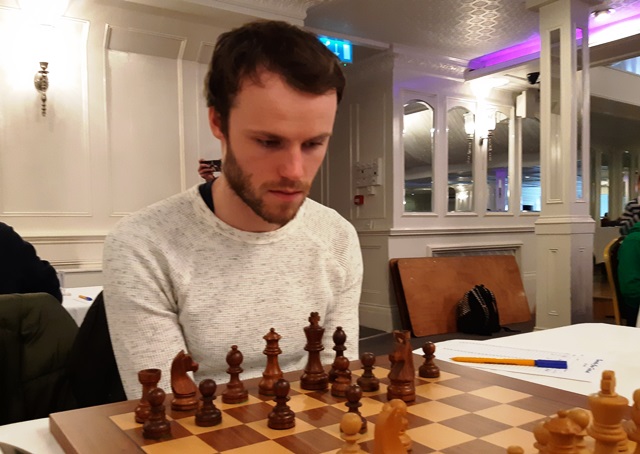 Theo Wallace is the new Bunratty Minor Champion this year, he won it in a Blitz play-off. 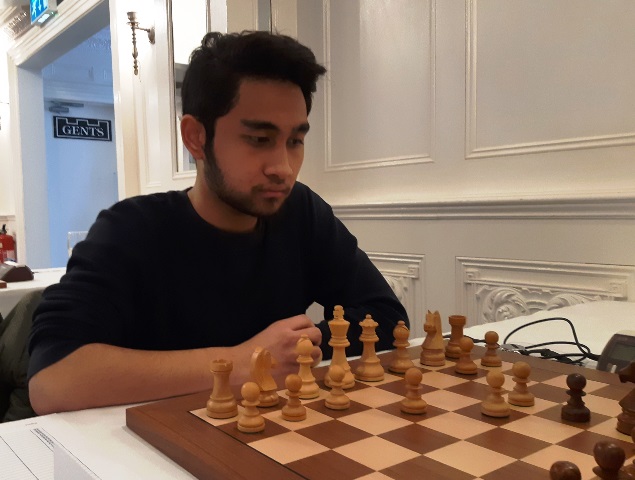 Muhd Khairil Asyr Khairil is the new Major Champion this year, he didn't need a play-off. 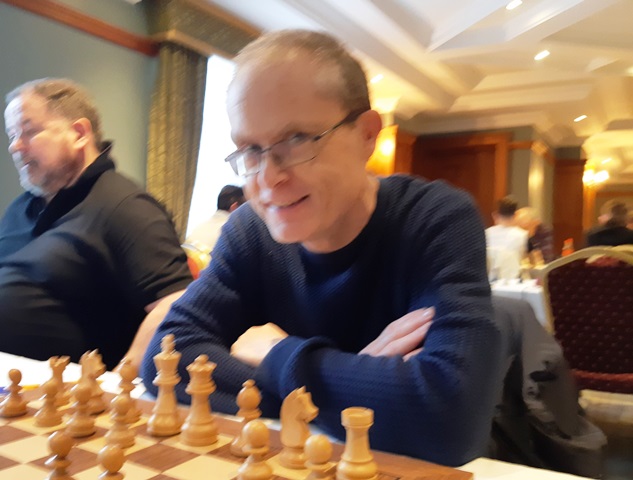 Ciaran Quinn is the new Bunratty Challengers Champion this year, he didn't need a play-off either ! 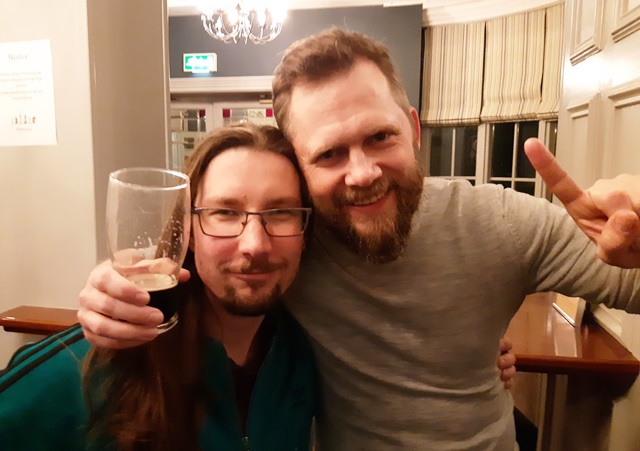 Tomslav Marosevic and Oddbjorn Sjogren, both from Norway and they traveled here specially for the event after hearing about it from Simon Williams too, that Ginger GM has a lot to answer for ! 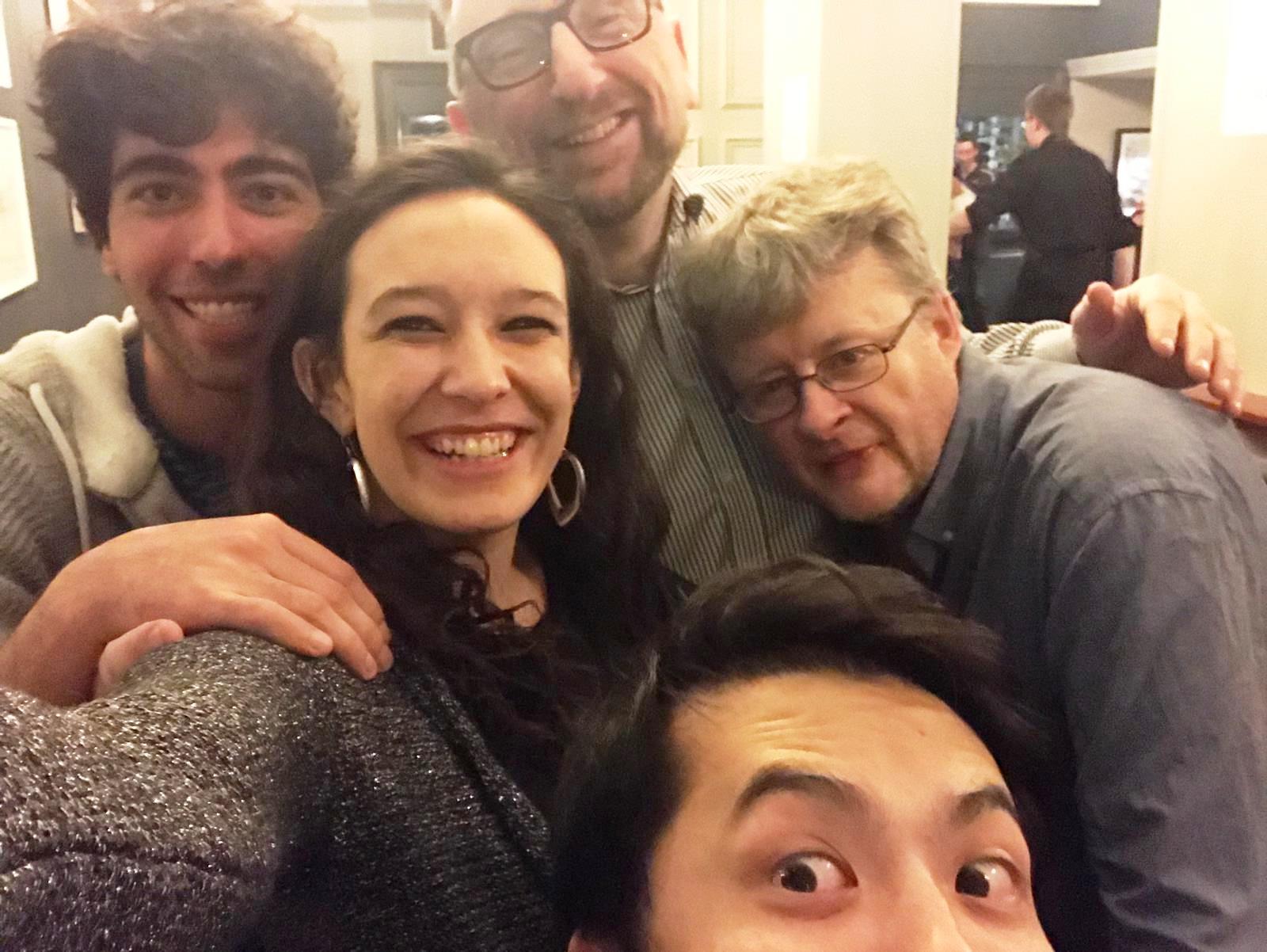 This is the last photo and my personal favorite, this rowdy bunch were the last in the bar on Sunday evening, do you recognise all the faces?