Fourteen 8-player teams competed in this year’s final, on Tuesday June 11th. Luckily the weather outside wasn’t so sunny as to distract the 120 or so young players, who played their hardest from 10:30 am till 3:30 pm with only a short lunch-break. Concentration, fierce determination and genuine chess skills were all to the fore.

The seeded teams all won in Round 1, although there were a couple of close matches, with St Clare’s Manorhamilton taking 3½ points against Ennis. After Round 2, there were only three teams on full points, so the two top seeds (St Mary’s and St Laurence’s) faced each other in a “crunch” match in Round 3. This was a very hard-fought encounter, involving some of Ireland’s strongest primary-school players (Benjamin Murray, Eric Wang, Yubo Wang and Wanbo Yu from St Mary’s and the Cooney brothers Thomas and Lorcan, along with Daniil Kashinin and Carl Morrison from St Laurence’s). St Mary’s eventually emerged on top with 4½ points, but five St Laurence’s players all managed to score either a win or a draw, something not many teams have been able to do against St Mary’s in recent years! 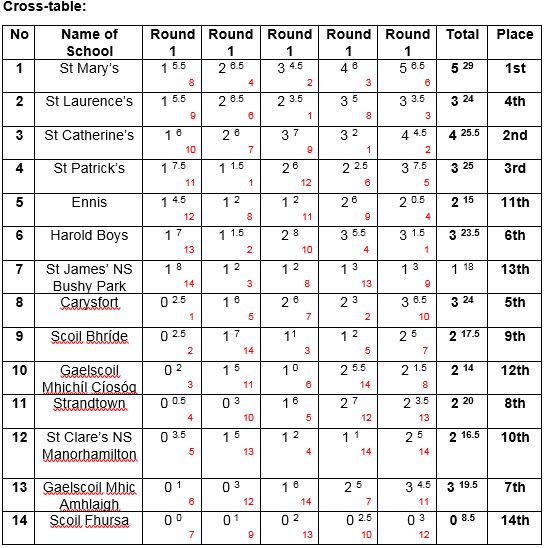 Meanwhile St Catherine’s had quietly racked up three wins, so they were next to face St Mary’s in what proved to be a decisive encounter. The Donore Ave team fought hard and won the bottom two boards, but the St Mary’s top and middle boards proved too strong and the match finished 6-2 to the 2018 champions. In the final round, St Mary’s had a comfortable win against a very solid Harold Boys team, which ensured them first place with 5/5 match points. Well done St Mary’s!

St Catherine’s, led by the only girl to play Board 1 in the competition, Eithne Ogbata, had a nail-bitingly close (4½-3½) win against St Laurence’s, which gave them their best-ever placing in 2nd. St Patrick’s from Galway won their final match 7½-½ to tie for 3rd place with St Laurence’s, Carysfort, Harold Boys and Gaelsoil Mhic Amhlaigh. The game-points tie-break system awarded the 3rd place trophies to St Patrick’s and the 4th place to St Laurence’s. Carysfort, who had scored the same number of game-points as St Laurence’s, unluckily missed out as they had lost in the individual match, and they were awarded 5th place. Harold Boys took 6th and Gaelscoil Mhic Amhlaigh 7th place.(See cross-table.)

There were many excellent individual performances on the day. All teams who finished outside the top four were awarded “star player” medals for their best scorers. These were Eoin Prendergast and Jack McNulty from Scoil Fhursa, Oscar Roe from Bushy Park, Conall MacCárthaigh from Gaelscoil Mhichíl Cíosóg, Ronan Kilroy and Egor Gulyants from Ennis NS, Sion Aji from Manorhamilton, John Danaher, Daniel Murphy and James Griffin from Scoil Bhríde, Dexter Harris from Strandtown Primary (a superb 4½/5 on Board 1!), Donnacha Naughton from Gaelscoil Mhic Amhlaigh, Chenjie Long, Diarmuid Power and David O’Connor from Harold Boys, and Adam O’Connor and Dylan O’Connor from Carysfort NS (Dylan scored 100% - 5/5 on Board 8!).

The tournament was jointly organised by Brendan Buckley and April Cronin, and the tournament controller / arbiter was the ever-calm and authoritative Lukasz Goralski. According to feedback from managers, the young players enjoyed the event immensely, showing that children relish a challenge. These were the best playing the best, and they knew it!

If anyone knows of a strong school team who didn’t take part this year, especially from one of the many counties unrepresented, do put us in touch with them. April Cronin can be contacted at aprilmarycronin@gmail.com and Brendan Buckley at brendan@chessossity.com.