Welcome to our review of the Irish Championship 2020 which was one of the stranger and more intriguing Irish Championships ever. I think we all hope this will be a once off for this prestigious event and that by the 100th edition next year, we will have players facing each other under more normal conditions! Special thanks to Sean Coffey who allowed us to build on his review, Eugene Donohoe and Colaiste Eanna for their photos and Nandita Kanyamarala for her videos.

To the event itself where we had a good entry of 32 players but somewhat surprisingly, that included only three former champions! We had possibly our youngest ever entrant to the Irish Championship (Kavin Venkatesan at aged 11). We had an absolutely even split of players under and over 21 years of age with 16 of each. And we had Covid-19 protocols - in the hope of keeping everyone as safe as possible and potentially offering a blueprint to bringing other events and competitions back in the Covid-19 era.

But for now, lets focus on the big one: this event, the 2020 Irish Championship - and give a round by round review of how it all played out.

Interesting, our three wildcards for the event (players rated under 1900 who were thought to have been likely to go over 1900 in the last 4 months of lock-down) all secured draws in round one. Adam Collins easily held Carl Jackson, Leon Putar clung on in a rook and pawn ending against David Murray and Lara Putar fought to the bitter end in an uneven position against Gerry O'Connell to secure her half point. 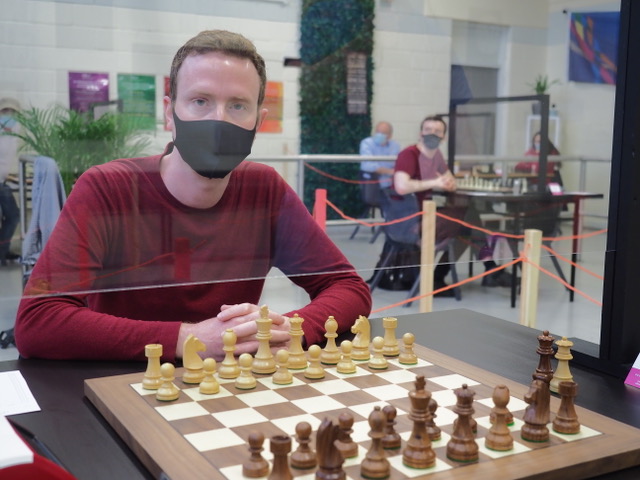 Elsewhere in round 1, it was safer waters for our top four seeds with IM Sam Collins, FM Tarun Kanyamarala, FM Tom O'Gorman and IM David Fitzsimons coming through round one unscathed. 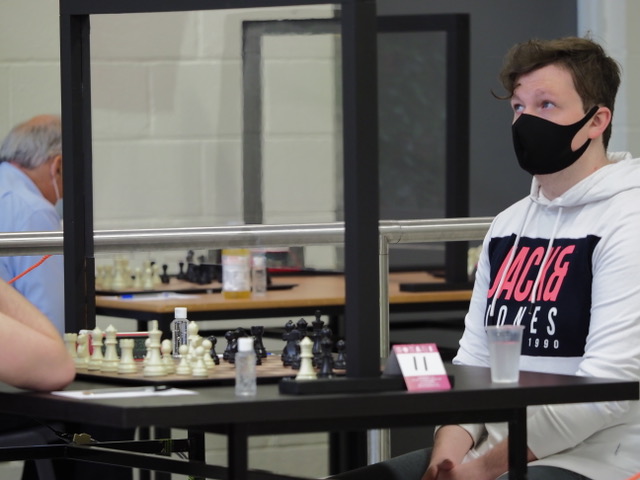 Elsewhere, FM Tom O'Gorman, FM Colm Daly and FM Conor O'Donnell went marching on to 2/2 to join Sam Collins and Shane Melaugh as the only remaining players on perfect scores.

There was a draw in the battle of the wildcards between Leon Putar and Adam Collins, FM Killian Delaney got back on track with a win over Lara Putar while in the inter-club battles, David Murray defeated Eoghan Casey and Kevin McHugh and Brendan Lyons played out a draw.

Round 3 saw IM Sam Collins outplay FM Conor O’Donnell in an ending to take a clear lead with 3/3, followed by FM Colm Daly and FM Tom O’Gorman (who drew in this round) and the Kanyamaralas (who drew with each other yesterday) on 2½. The games seemed generally much more combative in this round for some reason; the most spectacular was Paul Wallace’s win against Gavin Melaugh.

In the big game of round 3, IM Sam Collins took down FM Conor O’Donnell with the black pieces. The top seed is now the last player on a perfect score with 3/3. 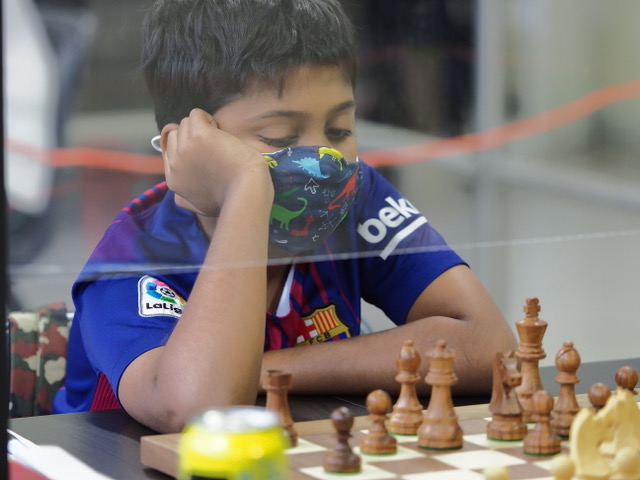 Special mention should go to Kavin Venkatesan here as he became the youngest player to ever win a game in the Irish Championship. It can get lost in the sheer amount of juniors coming through, particularly in this event, but Kavin is just 11 years old and has already been over 2000 with plenty of scalps to his name. 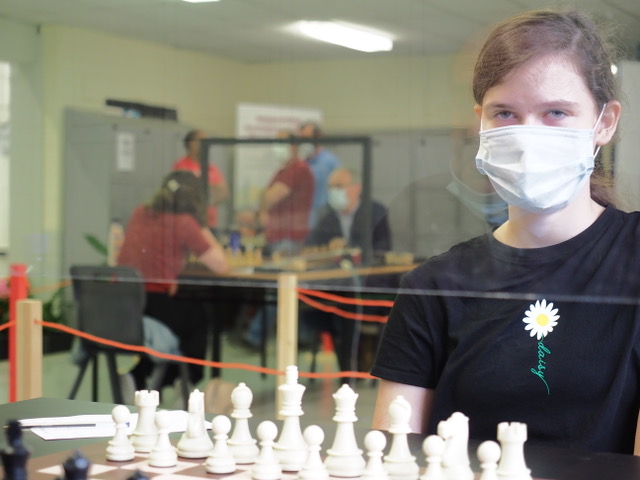 Bottom seed, Adam Collins continued to impress with his fourth draw in as many rounds. Kavin Venkatesan nabbed his second win here, this time dispatching Carl Jackson while wildcard Lara Putar put her first win on the scoreboard as she defeated Kevin McHugh.

Round 5 upended the tight bunching, with IM Sam Collins impressively winning as Black against FM Tarun Kanyamarala, and FM Colm Daly winning as Black against IM David Fitzsimons, after the latter went wrong in an equal position. For some reason, there seemed to be quite a few blunders in this round: perhaps the longer time control is causing fatigue? After round 5, IM Sam Collins is ½ point ahead of FM Colm Daly, and a full point ahead of a chasing pack of five players.

This round also saw the start of our commentary coverage with FM Henry Li joined by former champion, FM Stephen Jessel, from the midway point of the round. 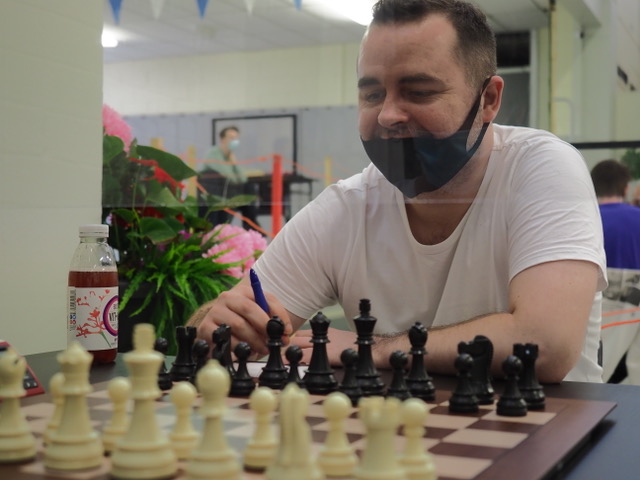 A dramatic round 6 saw IM Sam Collins stumble, blundering in an equal position against FM Tom O’Gorman. Even then he had a late chance to rescue a half point from a completely lost ending, but missed it. Colm Daly took advantage of a blunder from another equal position to win, and move into sole lead. The game of the round, and indeed the event so far, was Killian Delaney’s hard-fought win against Conor O’Donnell. With three rounds to go, Daly led by ½ point over Collins, O’Gorman, and Delaney.

If the previous round was dramatic, round 7 was sensational. On the top board, FM Colm Daly emerged from the opening against FM Killian Delaney with a hopelessly lost position, while elsewhere the main challengers stood no better in their games. Just as a resignation seemed to be looming, though, Delaney blundered and Daly smartly capitalised. IM Sam Collins also won, very neatly. After round 7, Daly led by ½ point over Collins, and a full point over FM Tom O’Gorman, and all possible meetings between these players had already happened.

Also in this round, Tom drew with 9-time champion, FM Stephen Brady, who has fought his way back from the previously mentioned slow start to be back in the chasing pack. IM David Fitzsimons and FM Conor O'Donnell also recovered from recent losses to bounce back with wins to both reach 4.5/7; Conor impressively defeating second seed Tarun Kanyamarala and David overcoming Jonathon Peoples. Peoples had been on a charge going 3.5/4 from round 3 onward. 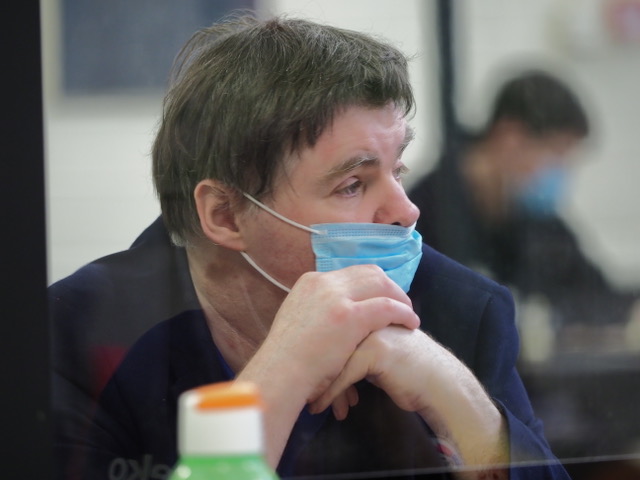 Henry is live now with several games at critical points and some potentially huge results incoming - including board 1 which could change the entire tournament dynamic: https://t.co/t3Q8nHmZb2

Adam Collins continued to impress, staying at 50% for the event with a draw against Jonathan O'Connor after defeating Darragh Moran in the previous round. Rounding out the shocks in this round, Lara Putar became the latest junior to add to Carl Jackson's misery with her third win of the event. 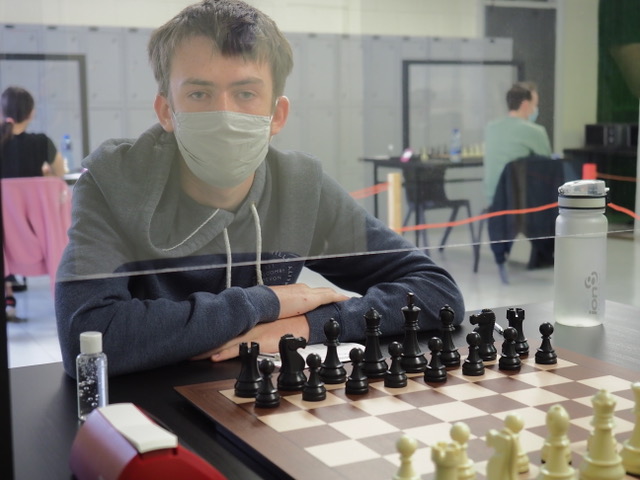 Newly imposed COVID-19 restrictions meant that three players had to sit out round 8, including Killian Delaney, who still had an outside chance of winning the event. The clash between FM Stephen Brady and FM Colm Daly on top board looked troublesome for the latter at one stage, but quickly petered out into a level position and in due course a draw. IM Sam Collins defeated IM David Fitzsimons in impressive style, while FM Tom O’Gorman won against Paul Wallace. Going into the last round, Collins and Daly were tied for the lead on 6½, followed by O’Gorman on 6 and FM Conor O’Donnell on 5½. The tie-break rules meant that any of Collins, Daly, or O’Gorman could win the title.

Further down the boards, there was also impressive wins for wildcards, Adam Collins and Leon Putar. 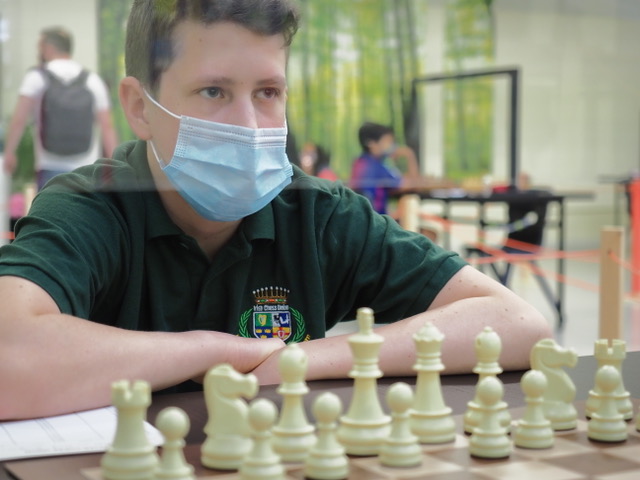 An early win by FM Tom O’Gorman on board 3 left him on 7 points. IM Sam Collins seemed to get into difficulties out of the opening against FM Stephen Brady, and the game steadily went downhill for him. On board 1, FM Colm Daly stood marginally worse out of the opening against FM Conor O’Donnell, and needed to draw to take the championship to a rapid playoff, but he too did not manage to solve his problems, and he lost in one of the last games to finish. This left FM Tom O’Gorman as sole winner of the event, for his first Irish championship. 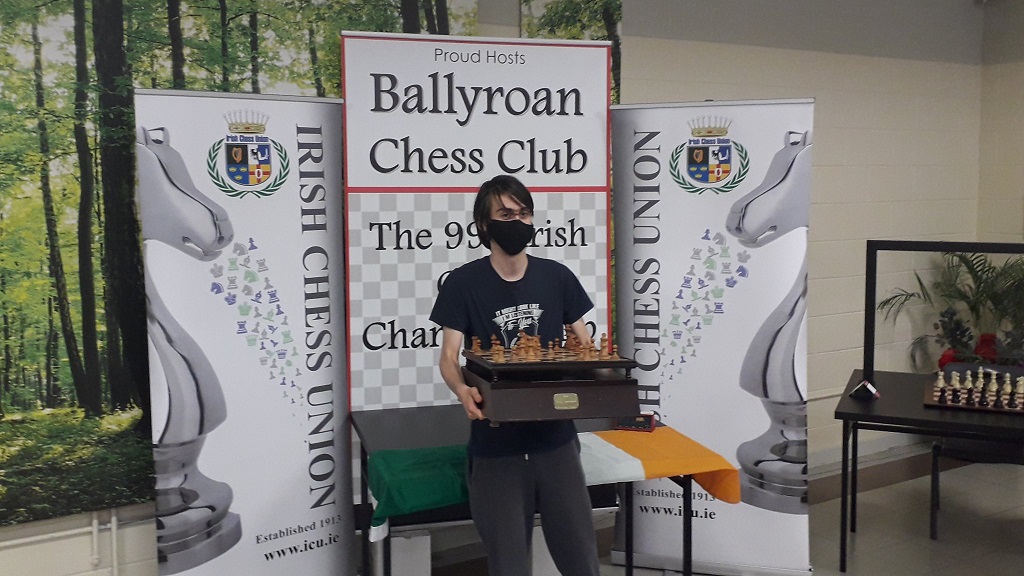 Overall, an excellent and entertaining event, with much fighting chess—very few draws—and plenty of drama.

All goes well. All ends well. 2020 Irish Chess Championship is a wrap pic.twitter.com/MVDAaZfALr