After 16 years, Ireland has come back to battle against the best European countries at the 2021 European Team Chess Championship at Terme Catez, Slovenia. 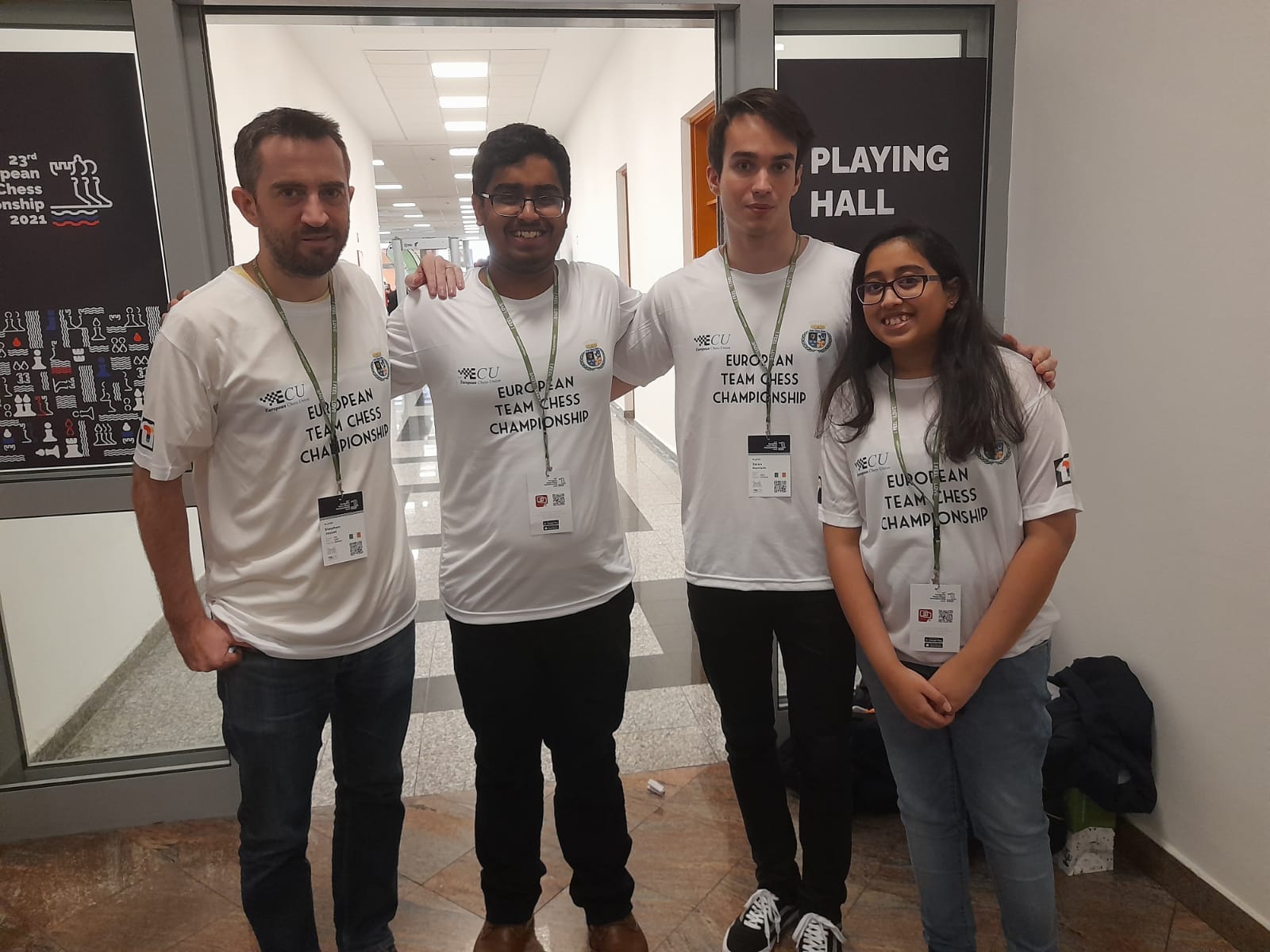 
In the first round, Ireland faced the host nation.


Board 1: Tarun drew against GM Borisek Jure (2595). Tarun had a space advantage right from the early middlegame, Tarun tried to attack the king-side. Black resisted the initiative on the kingside and created his own on the queenside. Tarun liquified the mounting tension on the queenside by opening the position in the center. In the mutual time scramble the game boiled down to a Queen vs 2 Rook. Both agreed to draw.

Board 2: Stephen lost against GM Skoberne Jure (2562). Skoberne played the enterprising reversed modern defense, for which Stephen responded in a principled manner - seized the space all over the board. Stephen was pushing on the kingside due to slight inaccuracies white took over the initiative. After the time control, a complex endgame arose: 2 Knights + Rook connected passed pawn on e6 vs 2 Knight + Rook with connected h and g passed pawns. Both sides missed their chances in a mutual time scramble, Skorberne came out on top in the complex endgame and scored a full point.

Board 3: Zalan lost against GM Matej Sebenik (2509). Zalan got a worse position from the opening. Matej undermined white's center with his pawn on e4 and bishop on g4. Zalan sacrificed a pawn on the queenside to reduce the pressure, but it didn't make a difference. Zalan resigned just after reaching the time control.

Board 4: Trisha lost against IM Tim Janzelj. Trisha got a decent position out of the opening. In the early endgame she erred which made her defensive very, she couldn't withstand the pressure on the queenside.

Team Ireland was again paired against a 2500+ average rating team.

Board 1: Tarun drew against GM Dragnev Valentin (2548). Tarun got a slightly worse position, Dragnev had a better version of the advanced French variation. Dragnev allowed Tarun's queen to penetrate on the queen via Qb5-e2-g4. Black was pushing however Tarun failed to convert his slight advantage and the game ended draw due to perpetual checks.

Board 2: Stephen lost against IM Blohberger Felix (2490). It was roughly an even game throughout the game, however, in time pressure Stephen collapsed by allowing black's king to capture the b5 via Kd5-c4-b5. Black's b and c connected passed pawn decided the game.

Board 3: Zalan lost against GM David Shengelia (2513). Zalan misplayed in the opening. He lost a pawn early on in the game, Zalan couldn't get much compensation as David exchanged all the minor pieces.

Board 4: Trisha lost against IM Horvath Dominik (2469). Trisha went all-in with the attractive Nxf7. Trisha brought the black king to Kh6, however, she wasn't able to attack fast enough before black consolidated his position. 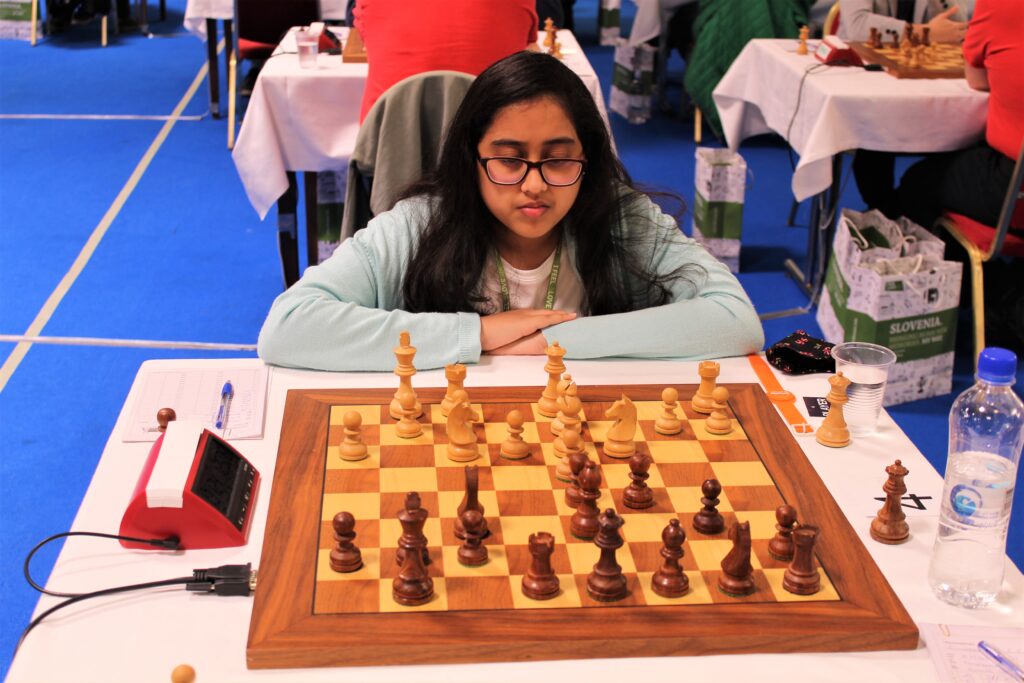 Trisha had a rough 1st half of the tournament, though her games were full of wild sacrifices!

Round four was a big breakthrough for Ireland as Zalan managed to beat IM Beukema Stefan. This was the first board victory for Ireland.

Board 1: Tarun lost against GM Daniel Dardha (2595). Tarun was pushing throughout the game, however, just before the time control (40 moves) he missed an excellent tactic by Dardha which resulted in a bad bishop vs a good knight where the white's king was weak. Daniel converted this imbalance into a full point.

Board 2: Stephen lost against IM Docx Stephen (2432). The game opened with an English defense. It as was a complex queen-less middle game. Later the game became even intense with both sides having Rook + six pawns each. As they say, all rook endgames are drawn, but playing under severe time pressure for several moves, Stephen didn't manage to draw the technically drawn rook endgame.

Board 3: Zalan tactically outplayed IM Beukema Stefan (2408). The tactics started from a deflection tactic with Nxc6 and it never ended till black literally resigned! The game ended in just 30 moves! 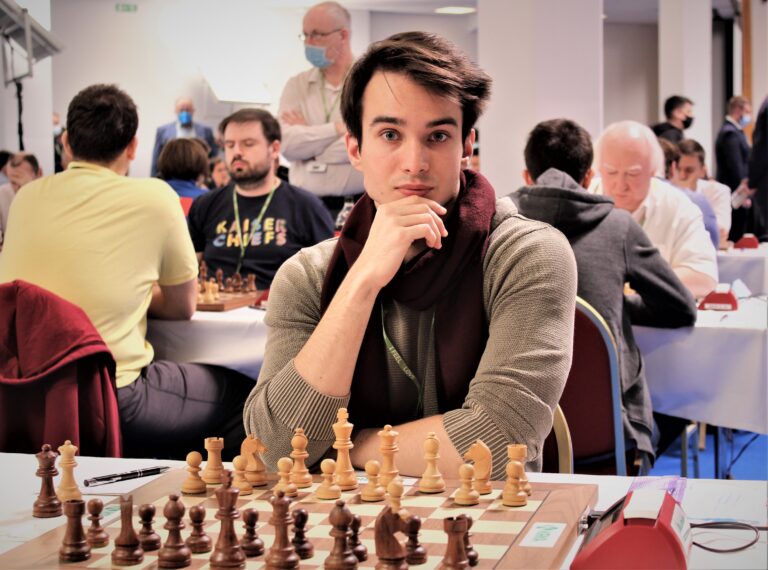 After a rough start, Zalan showed his class giving Ireland its first board win.

Board 4: Trisha lost against IM Verstraeten Rein. Trisha mixed up her prep, and face an everlasting queenside pressure.

The clash between two Celtic Nations Scotland and Ireland.

Board 1: Tarun won against CM Adam Bremner (2204). Tarun grabbed a pawn however, he miscalculated a variation that looked like he lost a full piece, but Tarun figured out a way to gain 3 pawns for the piece. Just five moves away from the time control Adam hastily captured the b5 pawn and gave away his piece for the two pawns which made Tarun’s job easier. Tarun went on to win the game.

Board 2: Stephen missed a winning variation, instead of 45. Rxc4 Stephen could have played 45. a5 if Black tries to attack the pawn with 45…Ra2 then white can play a6 giving up the pawn followed by Bc5, winning the Bishop on f8. Even after 45.Rxc4 Stephen was winning but after the Bishops were exchanged it was a theoretical draw in the rook endgame.

Board 3: Zalan played the aggressive Benko Gambit, the position was equal in the middle game and both players agreed for a draw.

Board 4: Trisha had a better position out of the opening but then later misplayed the middle game and was a pawn down. The position was still unclear as Frederick’s king position was a bit weak. Trisha could have taken advantage of Black’s king position and played 31. Nh4! Sacrificing the knight 31…Qxh4 32.Rxf7 Kxf7 33. Qxg6+ Ke7 34. Bf5 followed by Qe6 mate. Instead, Trisha played 31. Nh2 which allowed Qd2 and Frederick went on to win the game. 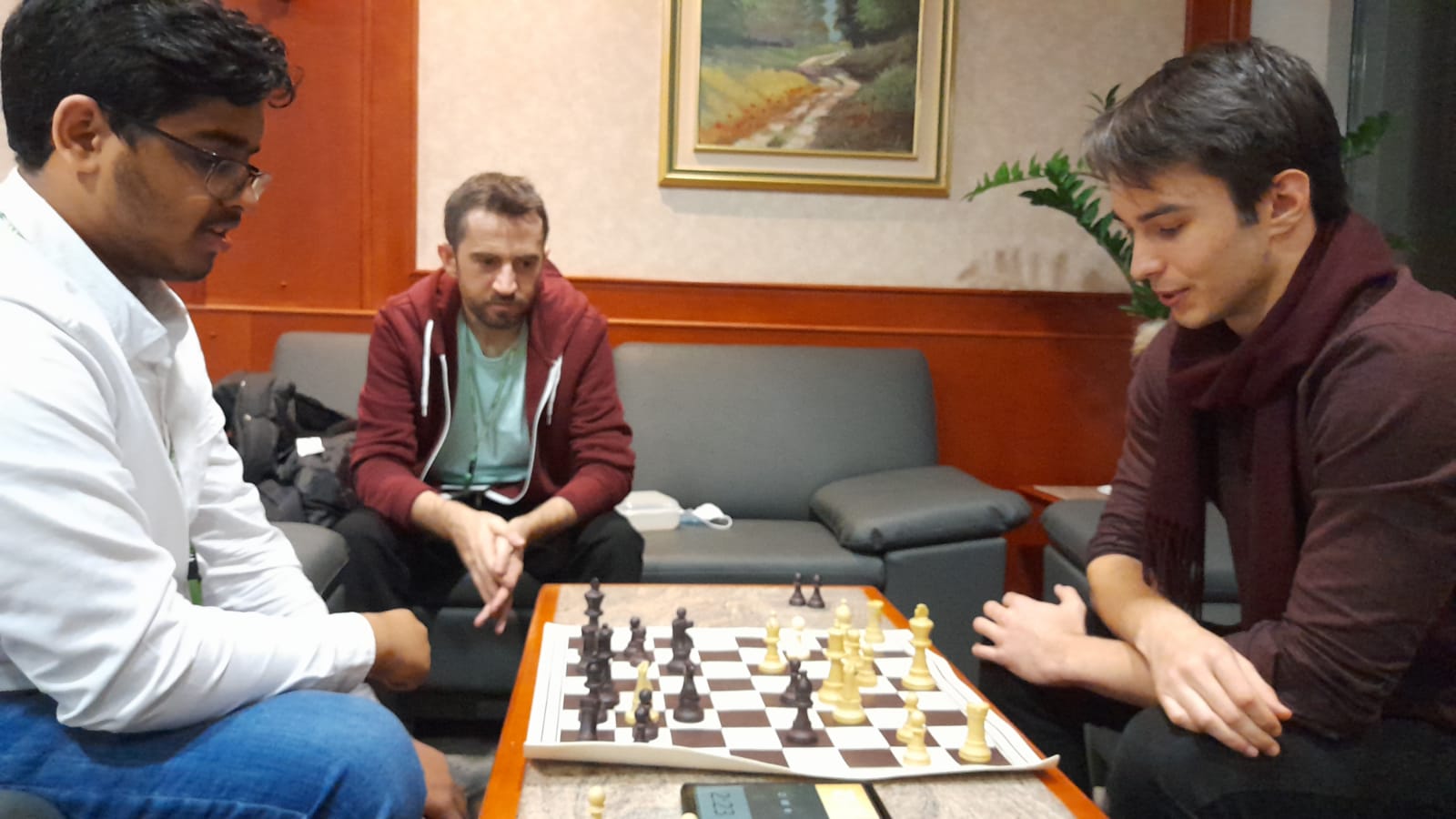 The night before the restday, the team had fun playing blitz!

Round 6: Ireland was paired against North Macedonia. They were higher rated on every board.

Board 1: Tarun didn’t have many difficulties in his game and managed to get an equal Endgame and both players agreed for a draw.

Board 2: Stephen was a pawn up in a Bishop versus knight endgame, Stephen could have played 68.Bc3 Nxg3 69. Bxe5 entering into some complex variations where he would be better. Stephen didn’t want to risk things and later agreed for a draw.

Board 3: Zalan was strategically lost in the middle game, but the young Macedonian IM had low time and sacrificed his rook for the Bishop which gave Zalan some chances tp hold. Toni played 58. f5 and Zalan immediately took advantage of this move and played 58…Rxe3+ 59.Kxe3 Rxg2, Zalan easily managed to draw that endgame.

Board 4: Trisha was clearly winning, but she was down to seconds and gave away all her advantage by playing 38.Rxg7 + which led to a force draw variation. Trisha should have simply captured the pawn on b2 and would have been a whole Rook up.

If there had to be a match where Ireland showed its full potential it was this round against Wales.

Board 1: Tarun won against FM Toczek Grzegorz (2296). With this win, Tarun secured his 2450+ Rating performance and only needed to play the 8th round to secure a 7-round IM norm. 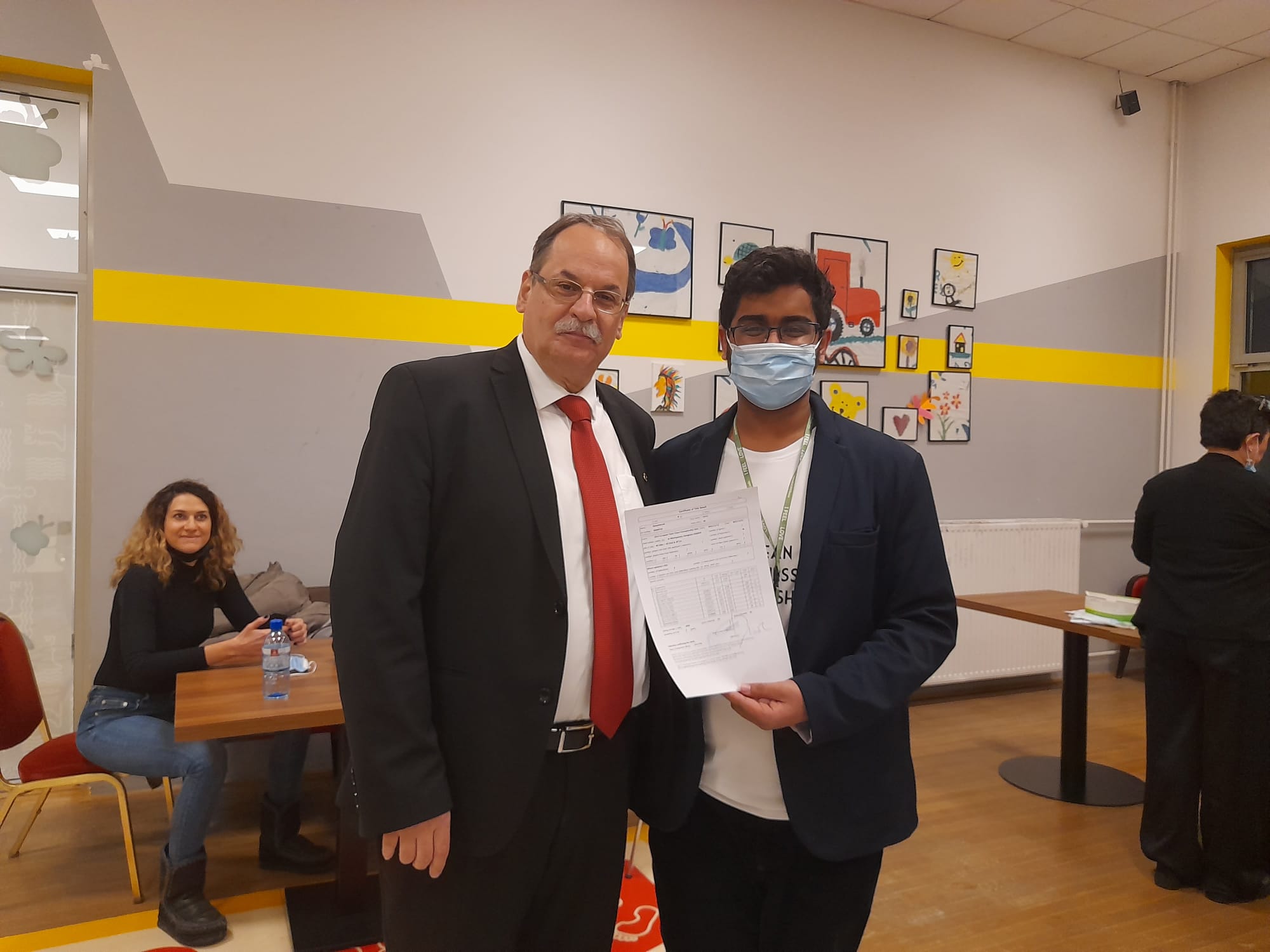 Board 2: Stephen trapped his opponent’s queen and easily won the game.

Board 4: Trisha got two pieces for a rook but it was an equal position where her opponent blundered with Rh4 which allowed Bb5 and white couldn’t stop the mate. 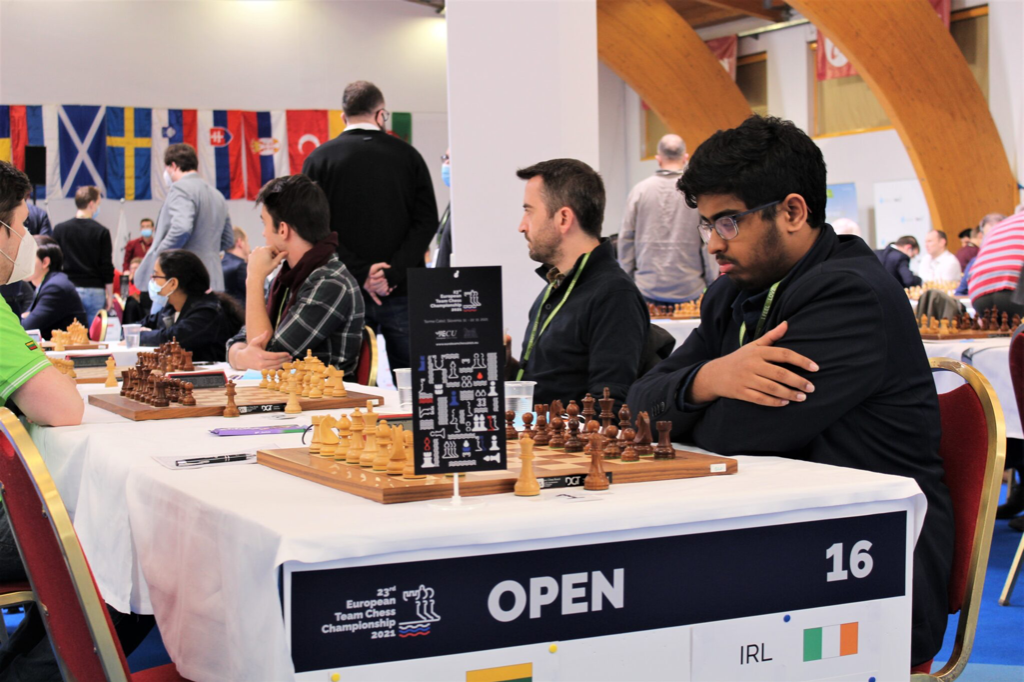 Ireland in action against Lithuania

Board 1: Tarun lost against IM Laurusas Tomas. Tarun mixed up his prep and ended up in a pawn-down position. Tarun wasn't able to hold the endgame.

Board 2: Stephen lost against IM Kazakouski Valery. IM Kazakouski conducted a brilliant attack against the king. Stephen was losing, however, things became complicated when black missed Nxf5 and furthermore Stephen sacrificed his knight to complicate things even more. Stephen had many chances to save the game, the last chance he had was to play 80.Qf5 and then Black is forced to play Rh6+ Kxh6 Qxf5 g8= Q.

Board 3: Zalan blundered a tactic early on in the opening

Board 4:: Trisha was a clear exchange up, but and blundered in the endgame.

Ireland really wanted to win this match against Albania and finish the tournament on a high note.

Board 1: Tarun lost against IM Memeti Dritan. Tarun tried to trap the black's queen however Mehmeti resourcefully out calculated Tarun. Tarun had a hopeless position in the Queen vs Rook + 2 Bishop endgame, soon he resigned

Board 2: Stephen drew against IM Pasko Llambi. Stephen had a complex middle where both sides castled on the queen-side. In the end, Stephen had chances to push but it looked very risky. The game ended in a draw. 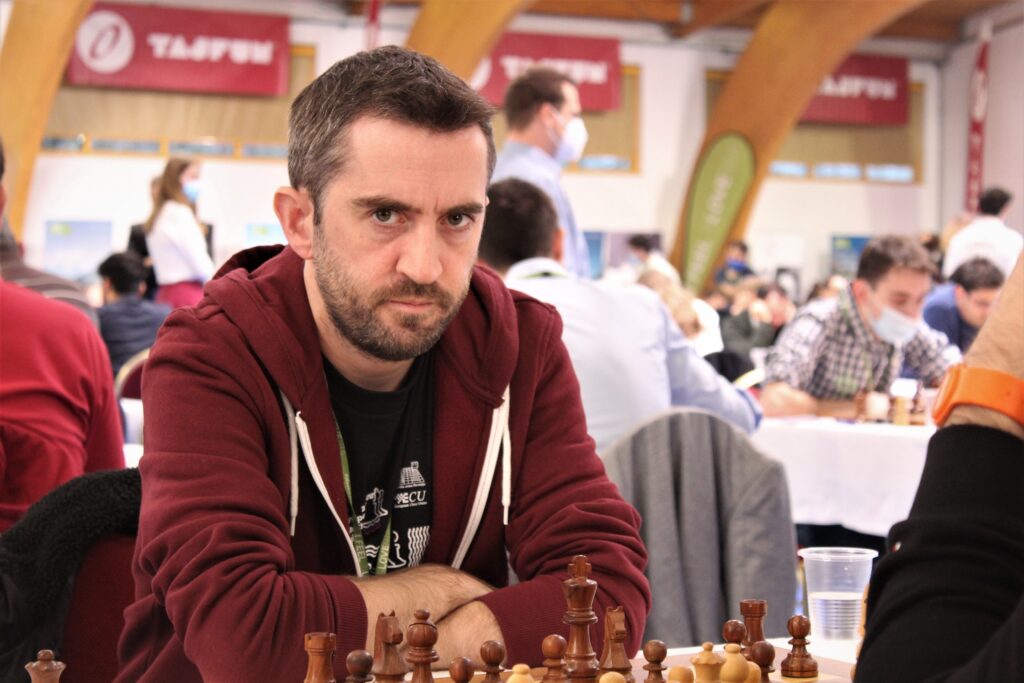 Our Captain mentored the young Irish team throughout the tournament.

Board 4: Trisha’s opponent blundered with 37. c4 which allowed Rxd1 Rxd1 Rb6 and white was forced to give up his queen and Trisha went on to win that game.

Ireland finished 37th place out of 39 teams participating in the event. The team fought very hard and gained tremendous experience by playing against higher-rated players almost in every round.