The National Chess Club Championship 2010 was held in the Greenisle Hotel, Naas Road, Dublin over the weekend of May 8th and 9th. This events new format has certainly sparked a lot of discussion and, indeed, a bit of controversy, but theres no denying that its a very exciting event for the players to participate in. Pictured to the right is top board for Bray/Greystones, GM Dorian Rogozenco (Romania, 2542, GM). 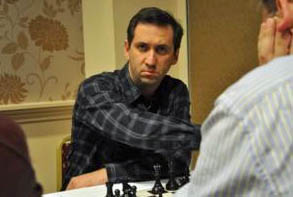 Even Paddy Power, the bookies, were giving odds on the various teams playing (and even some that were not playing) although where they were getting their information to set these odds I could never find out  some of the quoted odds seemed very strange to me.

The teams were finalised and circulated to the team captains a few days before play and they looked like this, in order of average rating (top 6 boards - 2 subs not included):

The first round paired the top teams against the lower teams which ended up like this:

The following game had a nice finish.

Round 2 draw pitted the defending champions against the number 1 seeds, and they played their most powerful team for this important encounter. It didnt help them much though, as the super-packed Bray/Greystones 1 team steam-rollered over Kilkenny 5½½.

Round 3 draw began on Sunday morning at 9:30am with the 15 minute rule applying, i.e., those players that turned up later than 9:45am would default their game. Although we had a few close calls, a certain Mr. Baburin having to park illegally in order to make it on time, we had no defaulters for the round.

Bray/Greystones 1 continued their complete domination of this event as they whitewashed the strong Dublin team 6-0. Their top board, Dorian Rogozenco GM gives us a few notes to his game again Martin Schmidt. Their board 3, Dragos Dumitrache IM, was the beneficiary of a gift from Jonathan OConnor, who, having played well to get to an equal position at move 20, promptly handed the game to his opponent. Kilkenny beat Ennis, helped by young John Courtneys[(PGN:29527:win] over the experienced Nick Larter, of Ennis. The Sarsfield team from Limerick, the 8th seeds, had massive win over the Bray/Greystones 2 team, which elevated them to 3rd place in the standings after round 3. This did not quite elevate them enough to meet the "Steam-Rollers", as they were now being called, Phibsboros whitewash of North Dublin was rewarded with a crack at the top team in round 4.

There was really no doubt who would take the first of the two places on offer for the European Club Cup in Bulgaria later this year, Bray/Greystones 1 team ran out very comfortable winners in the end. But what a fight for the second slot! It all came down to the game between Jonathan OConnor and Rory Quinn, if Jon won, Ennis would end up ½ point behind Kilkenny, depriving Ennis of 2nd place. As a matter of fact, because Ennis would lose the tie break, Rory had to win the game to secure the vital second slot, but, alas for Ennis, it was not to be. Final standings (with the first two teams qualifying for Europe):

Phibsboro took more points from the winners than all the other teams who'd faced them put together, helped, of course, by Marcos Vegas win over Dorian Rogozenco who, very sportingly, gave me a few notes on this game Sarsfield came really close to drawing the match against Kilkenny and spoiling the party for them, but in the end, the best two teams qualified, and good luck to them in Bulgaria.