This article part of the series: Paddy Kennedy - 1, 2 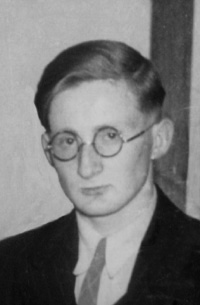 This article is by Paddy's son David. In compiling it, he made use of two letters in his possession, one from Paddy's brother and one from Noel Mulcahy. These had also been used by Prof. W.K.Hayman to write the posthumous biography appearing in the Journal of the London Mathematics Society (No. 42, 1967).

Paddy was born on 20 July 1929 at Clarecastle, Co. Clare, the third of five children. His father was a master carpenter by trade but had joined the police in 1923 after the end of the civil war. Paddy's maternal grandfather and many of his relations on his mother's side were blacksmiths near Castlemaine.

Paddy's family moved to Cork in 1937. Paddy joined North Monastery, the secondary school at Cork, in 1941 and his career there culminated in the award of the Honan scholarship in 1946, many of whose holders end up as professors. Paddy joined University College Cork and got his degree in 1949.

Paddy won the Irish Chess Championship in 1949, aged 20. His result will probably never be equalled. Not only did he win at the first attempt, but he also won with a 100% record. The quality of his play was remarkable for a player who had never played outside of Cork prior to that event.

According to Noel Mulcahy, a number of characteristic features can be seen in his games at the championships. Firstly, a logical approach: he nearly always played what the position demanded, whether this involved a wild attack or precise manoeuvres. Secondly, a lack of nerves: in a crucial game he played an incredibly risky-looking line where his King was badly exposed. It must have taken a great deal of self-confidence and reliance on his own judgement and calculations. Finally, patience and a willingness to work hard at a position to build up small advantage.

His potential must have been enormous. Normally players reach their peak at about age 35. If Paddy had worked even moderately at the game for a few years he would have been one of the top half dozen players ever produced in Ireland. There was, however, a falling off in the quality of his play in autumn 1949 and he resigned from the Cork Championship after playing (and winning) only two games. Mulcahy suggests this may have been down to a sense of anti-climax after the Irish coupled with unexpected difficulty in beating weaker players.

About the same time, nerves began to affect him and his remaining formal competition results were poor. He played for UCC in the InterVarsity in 1950, scored well, but played indifferently. He scored just 50% in the 1951 Irish Chess Championship.

In 1951, Paddy took up his University career as an assistant lecturer at Aberystwyth, where he married in 1954. He moved back to Cork at the end of the 1954 session under threat of being called up into the British Army (not an encouraging prospect for a patriotic Irishman) and became a lecturer in 1956. He gained his DSc in 1960, at the age of 30, and was elected a fellow of the Royal Irish Academy in 1962.

In 1963, Paddy returned to the United Kingdom as the first Professor of Mathematics at York. After a depressive illness, he died tragically in Nottingham on the night of the 8th/9th June 1966. He left a wife, Pam, and three children.

What is often not known is that Paddy was a promising pianist. He had lessons in 1950 from Mrs Tilly Fleischmann and learnt very quickly to play Chopin. She said of him at the time that he was the only pupil she had had who never played a wrong note. He was also very interested in listening to music, chiefly Beethoven, and his general conversation suggested an arts man rather than a scientist.

Paddy was fond of Tarrasch's dictum "Chess, like love and music, has the power to make men happy."