The Open Weekender was one event of many which provided an opportunity to get back to over-the-board chess after more than a year playing exclusively online, if at all. It was great to see so many players again and to feel the buzz, enthusiasm and camaraderie that make chess such an enjoyable game. We experienced this despite the precautions such as hand washing/sanitizing and mask wearing to try to prevent the spread of Covid. In fact the screens were no obstacle and the social distancing and good ventilation made the whole thing so much more enjoyable than the cramped conditions experienced at many tournaments in the past.

The pictures show chess players from many different backgrounds, of all ages, both genders and lots of different playing levels, enjoying classical chess in a pleasant environment. Refreshments were made available by the volunteers from Coláiste Éanna who hosted the event, and who did their school and club, the Knights of Éanna, proud. Great credit too is due to the organizer of so many events, John McMurrow, to Desmond Beatty and to the chief Arbiter Ivan Baburin, and to the Irish chess public who responded eagerly after being deprived for so long of the chance to analyse their games outdoors after a tense struggle in controlled conditions indoors. 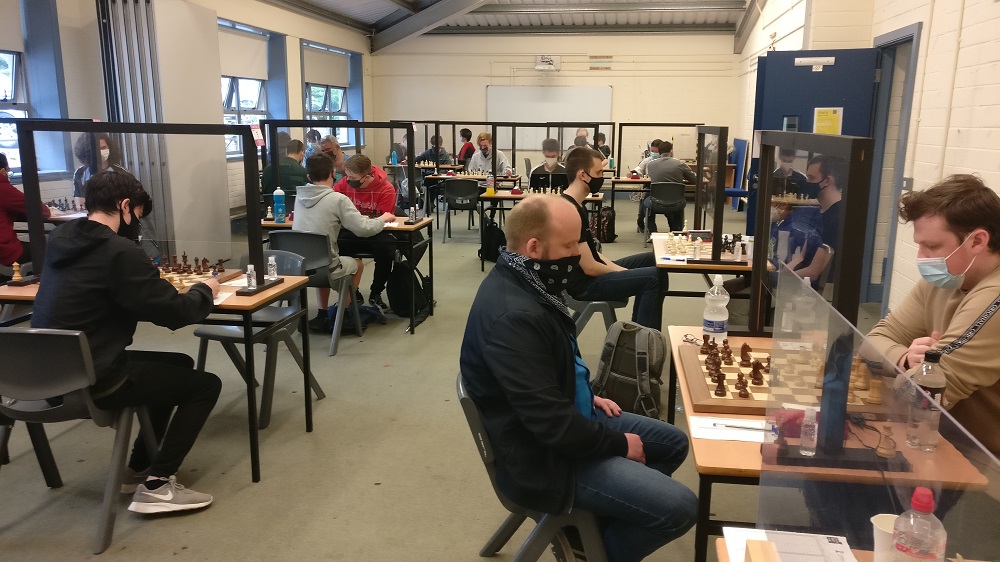 Players' and organizers' temperatures were taken and Covid checks were done as they entered the playing areas. The pictures show that players were spaced well apart from each other laterally, while opponents faced each other through perspex screens which allowed room underneath to move the pieces. The tables were not as deep as in the Irish Championship main event, little more than the width of the board, but there was plenty of room to move around. 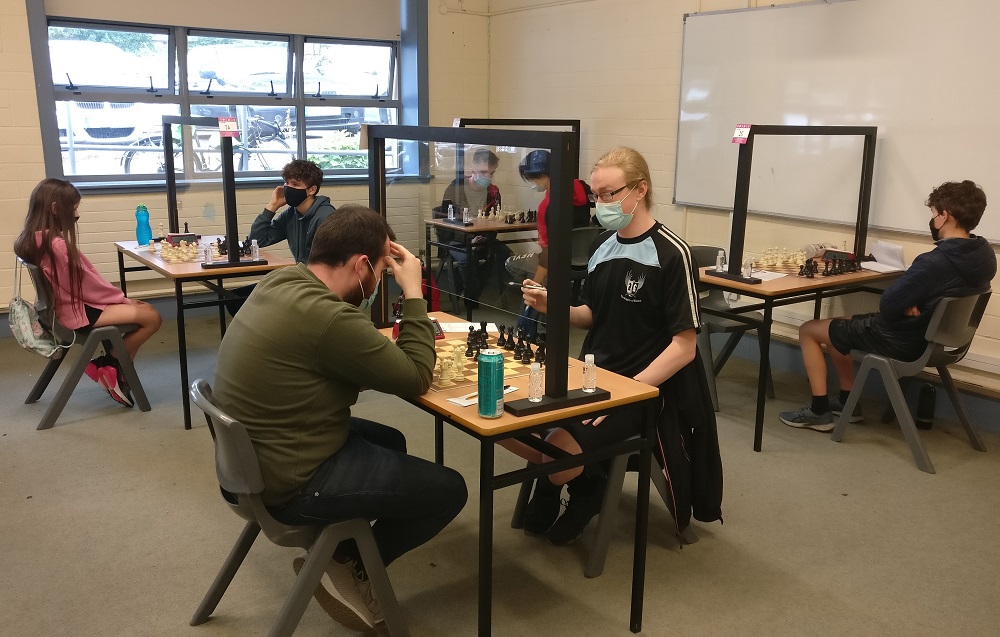 Players were allowed to spectate on other games from a respectful distance (more than 1 metre). Many tended to take a break outside while waiting for their opponent to move. Pieces were sprayed with a disinfectant spray between rounds and mini bottles of hand sanitizer were available at each board. I was astounded that none were nicked as they were quite cute! A real credit to the quality of the participants.

Fans and open doors and windows ensured good ventilation which was comfortable as the weather was not cold. All analysis took place outdoors on sets specially provided. Overall I would compare the risk indoors as similar to eating indoors in a restaurant. While the spacing was greater, the duration was longer. But that is just my personal estimate.

As someone lucky enough to have had two doses of the vaccine I intend to participate in the Major in two weeks time at the same venue, despite the fact that all the meals I have had so far in restaurants and hotels have been outdoors. I hope my decision proves to be justified.

The relative lack of entrants from older age groups compared to prior to Covid could be an indication of advisable caution.

Contact details of all players were taken as part of the protocol. I urge any who test positive in the next two weeks to contact the ICU, as that is the only way we will know for sure how safe the arrangements really are.

Players were not allowed to spectate on the main Irish Championship event (pictured below) which ran alongside the Open Weekender, to reduce the chance of mixing between the two groups of players. 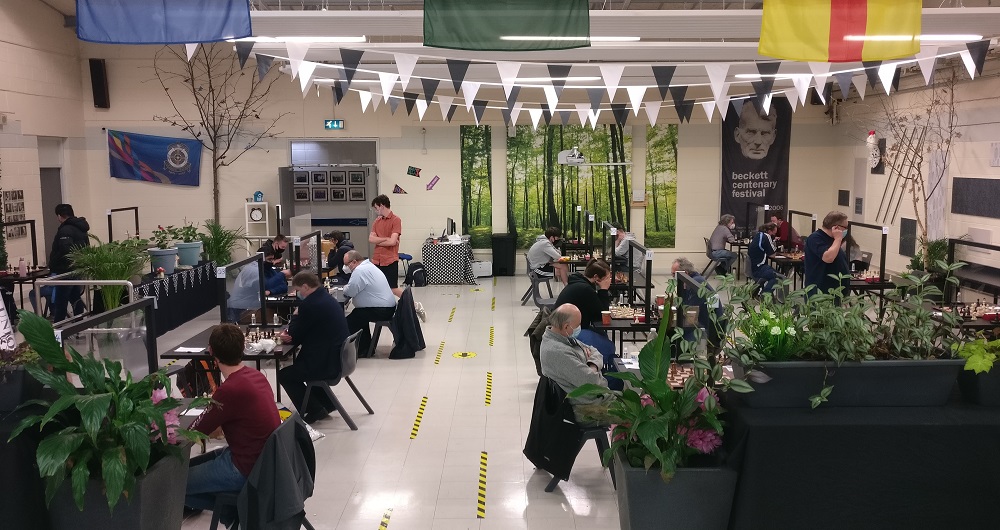 However, the live boards kept us all up to date with the latest moves, and the chess-results websites informed us of progress in all the events. Hopefully we can continue to enjoy similar events in the future, depending on how the Covid situation develops, of course. 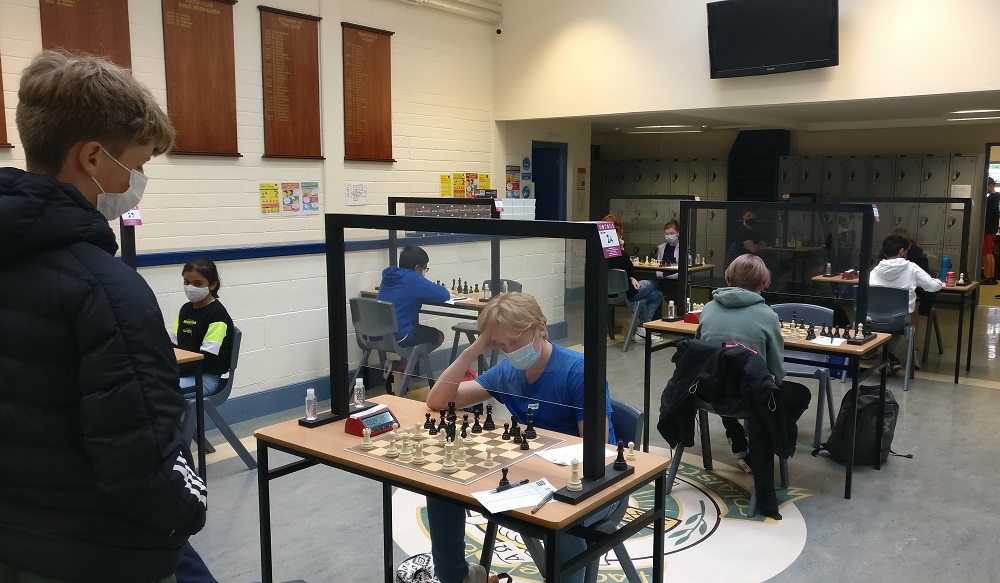 So far, up to round 3, the Open Weekender was dominated by the top seeds such as Shane Melaugh who thinks he owns board 1 (top picture in this article, on the right). However, there were a number of upsets where younger players beat higher rated opponents. In round 3 on board 4 I watched a brilliant draw by Paul O'Neill who lost a queen for a piece early on but struggled back to get a result in the end.

I had a chance as arbiter to watch many more fascinating games on the lower boards too. In our event 5 boards were live. These games can be viewed on the Live Chess website linked below. PGNs of these games can be downloaded from the chess-results site below too, which includes the results of all games played.

Round 4 produced an amazing game between the Melaugh brothers on board 1 with Shane winning eventually. See Live Boards, Round 4 link below. Meanwhile Jacob Flynn was working his way up to board 1 where he played Shane in round 5. A draw secured them both joint first place while Eoin Harrington beat Martin Fitzgerald to join them on 4.5 points. 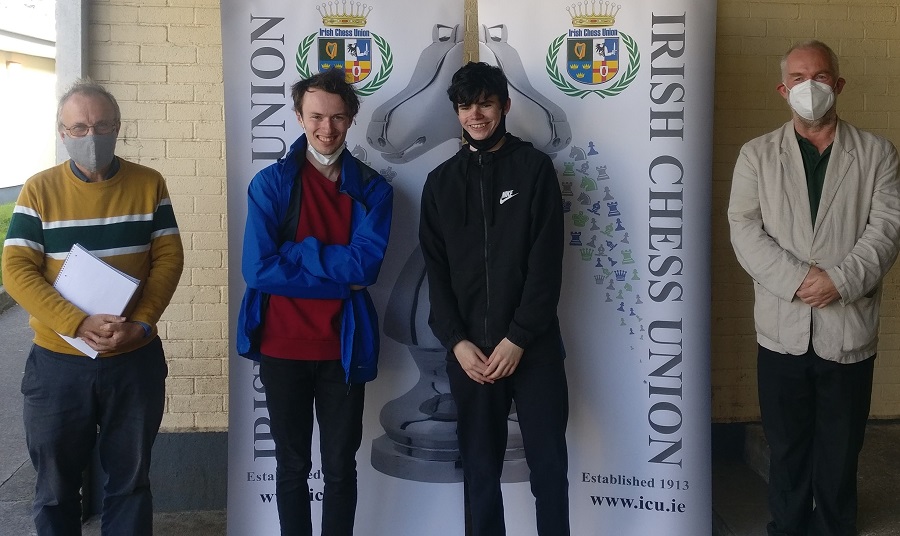 Pictured here are two of the three joint winners of the Irish Championships Open Weekender 2021: Jacob Flynn of Malahide Chess Club and Eoin Harrington, one of the Knights of Éanna. CM Shane Melaugh of Elm Mount Chess Club was the other joint winner. Each won €365. 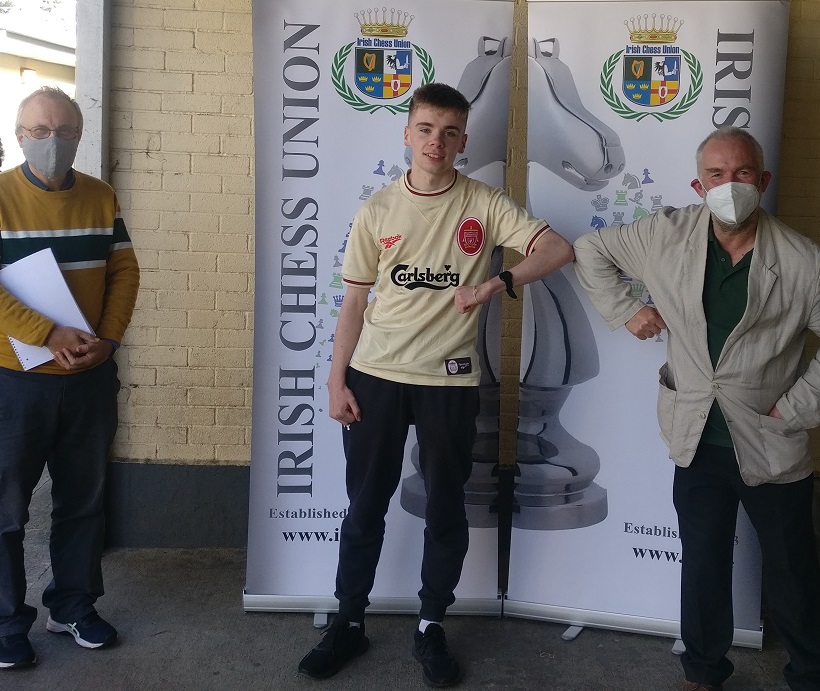 The Grading Prize of €100 for players with FIDE ratings under 1500 was won by a very young and dedicated player, Jason Liu, who was not present for photographs unfortunately.

A young man who has only taken up chess recently, Cathal Keenan, won the Grading Prize of €100 for players with an ICU rating under 700. Pictured with John Loughran (Asst. Arbiter, left) and Desmond Beatty (Chairperson of the ICU, right).

Full details of entries with all the links on the Irish Championships 2021 Open Weekender event page.