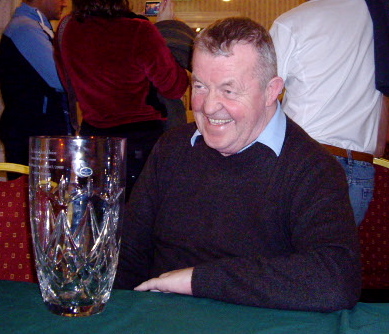 Eamon Keogh has been inducted into the Irish Chess Hall of Fame at a presentation during the Kilkenny prizegiving ceremony in the Club House Hotel on Sunday 25th November, 2007. Jack Lowry, in a moving speech, spoke warmly of the huge contribution Eamon Keogh had made to Irish chess over the last few decades. It would be hard to find another person, he said, who had done more for chess in Ireland than Eamon. Twice Irish champion (1975, 1979), Eamon was the first Irish player to beat a Grandmaster (Stahlberg, 1966). He represented Ireland on many occasions, playing in numerous Olympiads and European competitions. Jack continued to speak of the years of service Eamon had given to Irish Chess in his capacity as Chairman, Treasurer and President of the Irish Chess Union, not to mention the numerous committees and subcommittees on which he had served. He also spoke about the affection people have for Eamon and the high regard in which he is held.

Eamon Keogh has also given tremendous support, Jack said, to many tournaments throughout Ireland and was a major driving force behind the Telecom Open in 1991, Ireland's largest Chess Tournament, and the Zonal in 1993. Jack said that whilst it would be not be appropiate to mention money on such an occasion, and that he was mainly speaking about Eamon's time and energy, he would like to acknowledge the financial support that Eamon had made to Irish Chess over the years.

The main thrust of Jack's speech, however, focused on Eamon's vision for Irish chess. Whilst it can be difficult sometimes to explain what exactly is in question when we speak of "vision", Jack explained that Eamon had shown vision in many of his actions over the years. His help in bringing Grandmaster Alexander Baburin to Ireland, for example, provided enormous benefits to a generation of young and not so young Irish chess players. Jack then asked the Irish Chess Union's chairman Philip Hogarty to present the Hall of Fame Award to Eamon. As Eamon accepted the award from Philip one of the onlookers decalred: "Ní bheidh do leithéid arís, Eamon!" (Your likes won`t be seen again, Eamon!). A fitting conclusion to the evening's ceremonies.

The Irish Chess Hall of Fame Award was introduced last year to recognise significant contributions made to Irish Chess. Alexander Baburin was the first recipient of the award.