I regret that I am again unable to attend the AGM. I have also decided to step down from the post of FIDE Delegate. It is quite a wrench after 32 years. 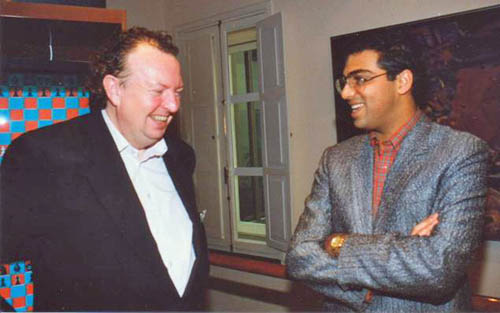 I sometimes hear moans and groans of the type "what has FIDE ever done for me?" Well, FIDE is an organization comprised of national federations, not individuals, so there is no direct communication with players around the world, only with their national federations. There is, though, plenty of communication available through FIDE's website, but that requires the individual to go there. For those too lazy or too Luddite to do that, I have selected a few things for this report.

For four decades, FIDE Titles and Ratings have been the engine of growth, encouraging a huge number of tournaments worldwide, and player numbers have been vastly increased by the successful development of Chess in Schools programmes. But in my view, the single most important thing that FIDE has done for the individual is to get chess recognized as a sport. That was done in the closing years of the last century and, if you need to convince anybody, point them to the ARISF (Association of IOC Recognised International Sports Federations) website (www.arisf.org). Having achieved that, FIDE has provided help and assistance to member federations to get chess appropriately recognized in each country. More than 77% of the European Chess Union members (42 out of 54) have gained government recognition (27 are even full members of their National Olympic Committees). Worldwide, the record is even better, with 81% recognition (135 of 166). We have this year received an offer of real help  in addition to a letter of support from Jacques Rogge (President of the IOC), a visit has been promised by either the FIDE President or the ECU President, to strengthen the hand of the ICU in meetings with officials from the Department of Education and Skills, to initiate a Chess in Schools programme, and the Department of Tourism, Culture and Sport, to make some progress in getting chess properly recognized.

For those who do not have any idea of what is involved in being FIDE Delegate, the ICU web site has had the following article up for a couple of years now. I find it somewhat ironic that after all those years of stumping up my own expenses, FIDE is beginning to ensure that Congress organizers provide accommodation for delegates, and the ECU is going still further, moving towards paying for travel costs as well.

The FIDE web site works tremendously well. There is a mass of information and you can find out everything about titles, ratings and the rest of the administration. Of course, web sites are passive affairs and if players do not look at them, then they will not know what FIDE (or the ICU) is doing for them. But if you are interested in the Agenda for the General Assembly in Khanty-Mansiysk, or perhaps FIDE's accounts, or what is being planned for the future, or where the 2011 World Seniors Championship will be held, or a thousand and one other things, then it is there, transparent for all to see.

The FIDE Rating System is, in my opinion, going from strength to strength. An excellent innovation was the special meeting in Athens (June 11-12, 2009) to discuss the rating system, involving members of the Qualification Commission and other experts, notably GM John Nunn and Jeff Sonas. There have since been several follow-up meetings and the latest one (Athens, June 1-3) said, among many other things "Last year much concern was expressed about inflation in the system. Although there were differing explanations, it was felt that many complex factors were involved. It was agreed that there was no necessity for remedial action this time". Incidentally, for those who say that FIDE Ratings are inflated in comparison with ICU ratings, I have been saying for over 20 years that ICU ratings, especially at the lower levels, are out of line with international ones. A very good piece of evidence for my assertion is to look at the performance of Irish players in the British Championships (from junior age-groups up to and including veterans); regularly over-achieving with performances 200 or 300 points above their ICU rating and the ECF recently provided an uplift to their 'gradings' (the English like to be different!) because of the steady drip of deflation over the years. As regards title inflation, GM Bartlomiej Macieja produced some intriguing numbers for the Association of Chess Professionals after the 2008 FIDE Congress, showing that in 1972, 0.120% of players rated over 2200 held the GM title, and by 2008 that figure had become "inflated" to  0.055%!

The FIDE Trainers' Commission has made enormous strides and there is now a worldwide system in place for the education and certification of trainers. There are five levels of certification, from Development Instructor (working in schools and junior clubs) up to FIDE Senior Trainer (lecturing at training seminars and acting as an examiner at the national level). There's a long way to go yet before we reach the high ground of UEFA or the GAA, but they do have vastly more resources than we do. Nonetheless, more than 30 seminars have been held in the past four years. You can find out more. I am pleased to have become the first Irish name on the list, having qualified for the FST title, which I received earlier this year.

We have suffered at the hands of the Arbiters' Commission this year in the case of Gerry Graham's application for the International Arbiter title, which has been refused. It is galling because Gerry has all the requirements for the IA title apart from the prerequisite FIDE Arbiter title. The Arbiters' Commission have become sticklers for the rules, but if not the arbiters, then who? Gerry, like anyone else will have to start with the FA title, to get which you must, in addition to having the necessary title norms, attend one of the many Arbiters Seminars which are organized each year and pass the exam (80% pass mark). Many Arbiters Seminars have been held this year, including the first Internet seminar, a development which will lead to an explosion in all kinds of seminars as the cost of organizing them is reduced enormously by the elimination of accomodation and travel costs, not just for the lecturers but also for the participants. In the past 20 months, 42 Arbiters Seminars have been held, with just under half (406) of the 856 participants being successful, resulting in 234 FA titles and a further 172 FA seminar norms. I obtained the offer of an Arbiters Seminar to take place during the Dun Laoghaire Festival, but it came only six weeks before festival week and time was too short to take advantage of it.

Finally, a brief reflection on the biggest changes I have seen during my 32 years:

What has the ICU done for FIDE?

Here's hoping the next 32 years of FIDE will be as successful and that the Irish Delegate(s) will continue to make a significant contribution. After all, we should have been founder members of FIDE, J.J. O'Hanlon having been much involved in the preparatory work, but was not a signatory at the founding meeting in Paris in 1924.