The Irish Championship 2017 sponsored by Clare County Council round 1 pairings can be seen here. Unfortunately, Paul Walsh pulled out of the event on Tuesday night and so the next person on our waiting list, Luke Scott, was offer the place to even up numbers for the event. IM Gavin Wall and Luke Scott are taking traveling byes in round one and will join the battle on Sunday for round two.

Ireland's only GM and current top seed will be returning to play in The Irish Championship 2017 sponsored by Clare County Council; his first appearance in the Irish in 9 years. Reports from the Irish Chess Championships 2008, which Alexander won with a spectacular 8/9 against very strong opposition, can be seen on the ICU site and Sean Coffey's IRLchess.. This would be his one and only win but he is back for more this year. 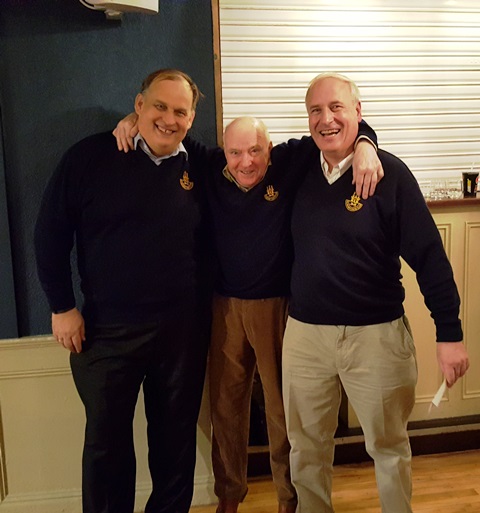 Since that win, Alexander has many titles to his name including this year's Kilkenny Chess Congress, he drew with super GM (2800+ at the time) Maxime Vachier-Lagrave at the Baku Olympiad, he has taught countless juniors and is currently ICU Vice-Chairperson. He has also been known to do the odd blindfold simul.

But will he be able to claim his second Irish title? Time will tell.

After taking a break from his chess career to travel the world and meditate - or so he tells us - Alex Lopez has returned to Ireland to focus on his chess - both playing and coaching. Alex is another one-time winner who has not returned to the Irish since his win; however, he won slightly more recently than Alexander in 2010 with a report here. 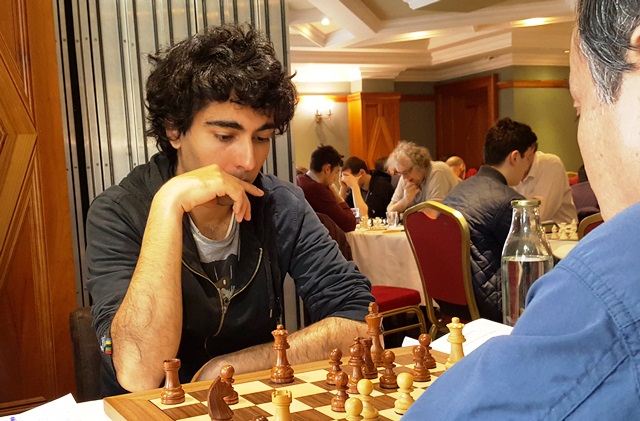 Luckily for Alex since his return to the board, rust has not been an issue. Having moved away from chess in 2014 (after some terrific performances and near-GM norms), Alex made a winning return to classical chess in January 2017 in the Mulcahy Memorial 2017. He would follow that up with great displays in The Bunratty International Chess Festival and Galway Chess Congress before his first FIDE event: the Tralee Classic. Alex played magnificently and came very close to a GM norm despite having 5 blacks and being the 8th seed.

Will he be able to carry this current form into the The Irish Championship 2017 sponsored by Clare County Council?

Someone else who impressed at the Tralee Classic was Ireland's top junior, FM Conor O'Donnell. Conor came within a whisker of a norm and will hope that he can kick on to the IM title with his Leaving Cert now behind him. The next event on his agenda? The Irish Championship 2017 sponsored by Clare County Council!

Conor is looking for his maiden victory in the event and although he may have been the top seed in the majority of Irish Championships with a live FIDE close to 2390, he is currently just our third seed. However, a strong field with 3 titled players means he will have his sights on a norm as well as the title - not to mention breaching 2400. This was a year of accolades for Conor picking up the Millfield International Schools trophy for the third time and retaining the best player award at the same event - a trophy which has only been retained by a select few and won once by GM Adams, IM Collins, IM Kelly and IM Quinn... And John Kennedy! Conor was also part of the team which won the prestigious Eton Rapid and top it off by representing Ireland at the Olympiad for the first time. 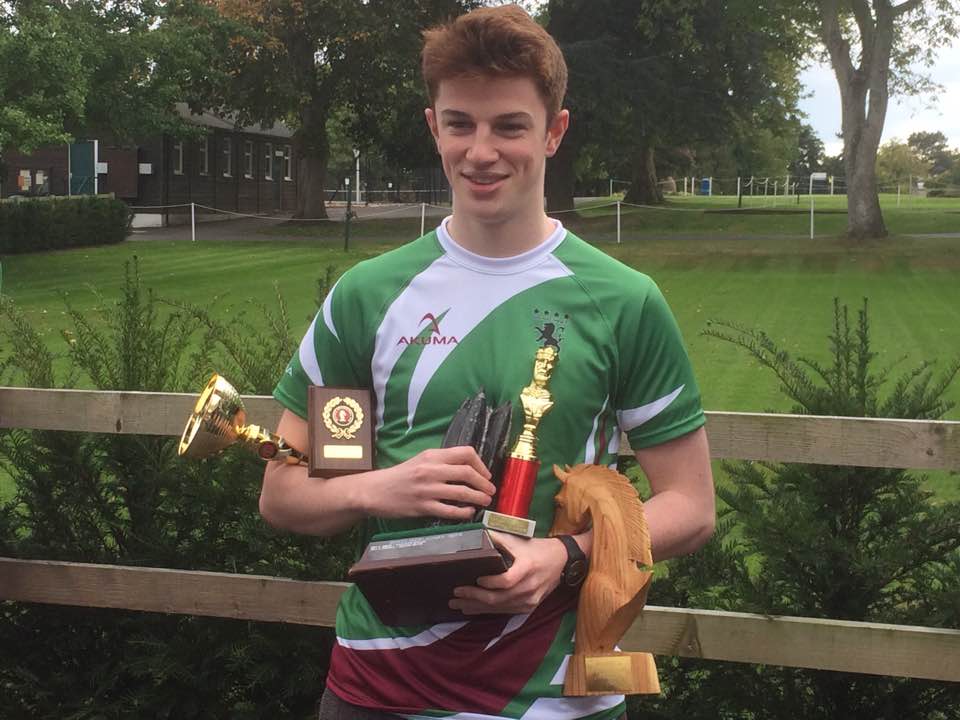 Is it too soon for Conor or is now the time for the world's top 100 ranked junior?

Gavin is another searching for his maiden Irish title having made his return to the Irish Chess scene in the Tralee Classic. There, Gavin played several of his opponents in the upcoming Irish Championships including O'Donnell, Li, Daly and Delaney who he scored 2.5/4 against. 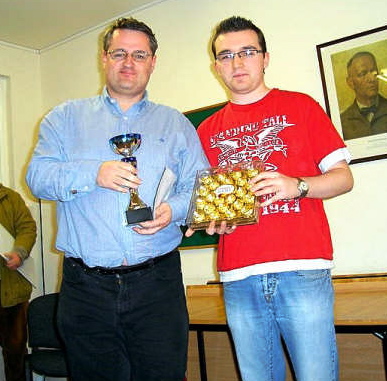 Gavin pictured above claiming his last major title in Ireland - the 2007 Leinster Championships - from the late Phil Hogarty.

Will he be able to mark the 10th anniversary of his last major Irish trophy with another win?

The 6-time champion was one of the first to commit to playing and will surely fancy his chances of adding to his haul in this year's event. He will be carrying some good form into the event too, having tied for first in Malahide and joint second in the Ennis Congress 2017. 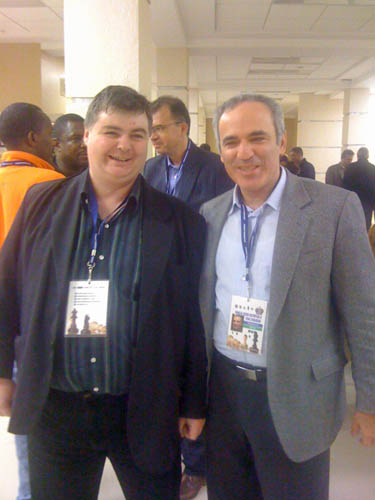 Perhaps its a good omen for Colm that he won this event outright in '05, '09 and '13... Will continue that sequence this year?

The four time champion ('81, '86, '88 and '15) is back to try to win his fifth Irish title this year but will be up against it as the 6th seed in a strong field. However, we certainly wouldn't count out the 2015 champion who only recently bridged a 27 year gap between titles.

It was a quiet year for Philip with just three tournaments played but that includes a strong performance in Galway where he was unlucky not to upset GM Korneev (the eventual champion), a 15th place finish in The Bunratty International Chess Festival & a joint second place finish in The Munster Chess Championship 2016. 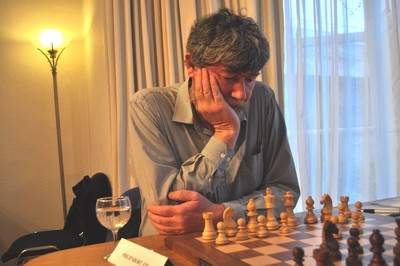 Philip's entry makes it 8 2200+ entrants; will that high-end strength ensure a tight finish?

Killian has been somewhat of a late-bloomer when it comes to joining the top-table of Irish chess - just four years ago he began the year as a 2012 (ICU) rated player but he now sits among the top Irish players with an ICU rating of 2206 and a FIDE of 2257. He's been driven by 4 Armstrong titles in 6 years, 2 NCC titles, several trips to the European Club Cup and by the goal of emulating fellow Delaneys, John and Paul, by becoming Irish champion and an FM. 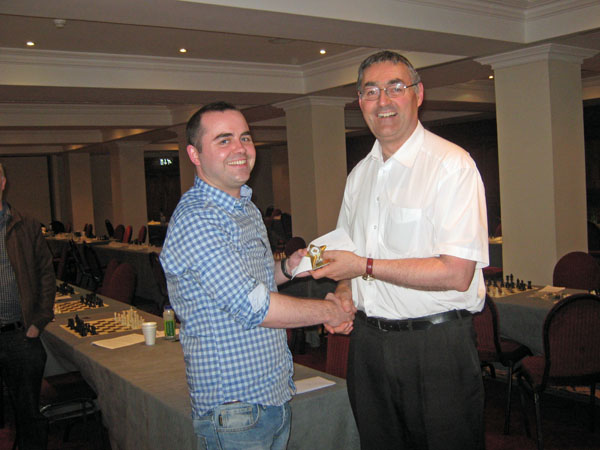 Killian came close in last year's Irish - eventually finishing third - and he will fear no one having secured results against many of the players currently entered. But will Killian be able to put 9-rounds together and really push for the title?

This is Henry's second Irish Championships having last competed as a wildcard in 2015 - since then he has gained 500 rating points and moved into the world's top 200 players under 16. It was an excellent season for Henry who, like his club and schoolmate Conor O'Donnell, picked up Armstrong, NCC, Millfield and Eton winners medals. Henry was also part of the winning Irish Glorney team and represented Gonzaga in the European Club Cup where he came very close to an IM norm which is when his rating really exploded. This was also the first event where Henry defeated a titled player - he would go on to beat a GM, IM and FM at the event. 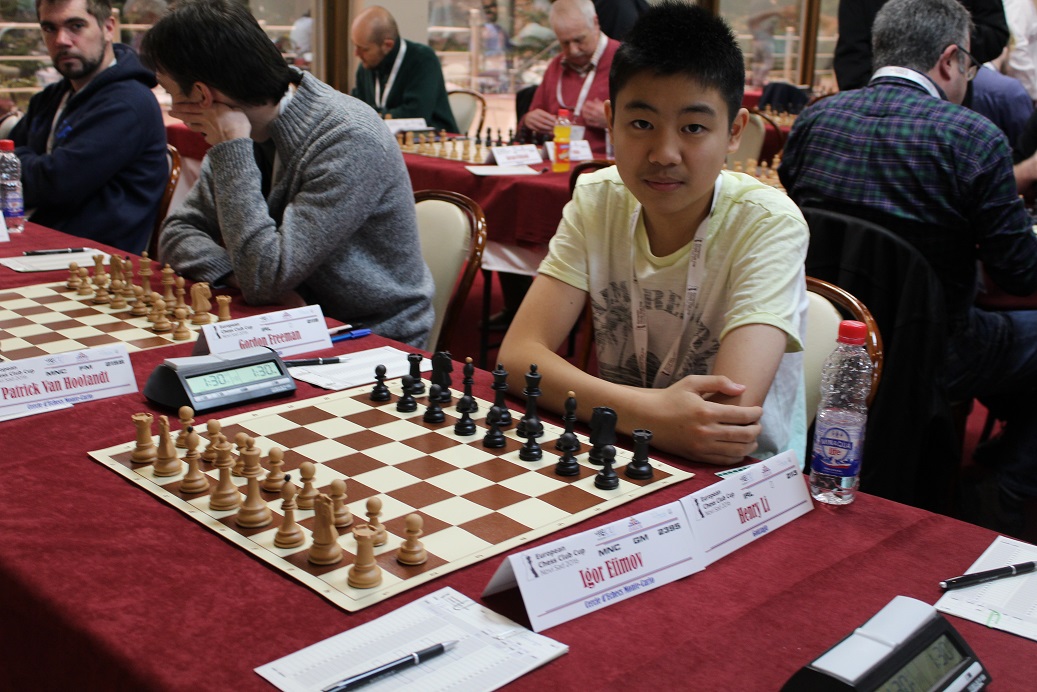 Henry is currently the 7th seed and will be up against it when it comes to winning the event but he did win two of his matches in Tralee against opponents he may see again down in Ennis. Will that give him the confidence to go out and upset the odds in The Irish Championship 2017 sponsored by Clare County Council?

The local man will be playing in his first Irish since 2013 when he finished 6th. Like so many others entered so far, Rory is carrying good form into the event with his FIDE rating at its peak (2139) and his ICU rating climbing 70 points in the last year and a half. 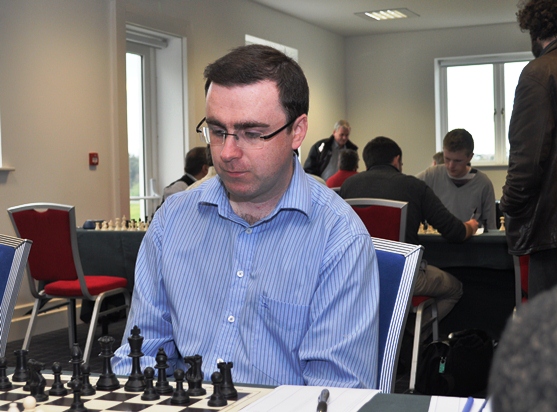 Will Rory be able to improve on his 6th place finish in 2013?

Paul has unfortunately pulled out. His place will be taken by Luke Scott to even up numbers. 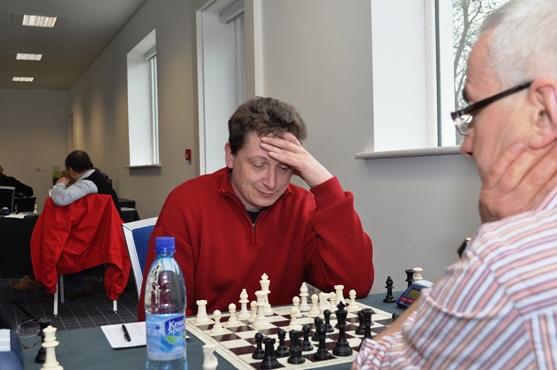 Anthony finished 5th in last year's event and had a very active season both individually and at club level - playing in both the MCU and LCU leagues as well as the NCC, 3 weekenders and the World Senior Championships. 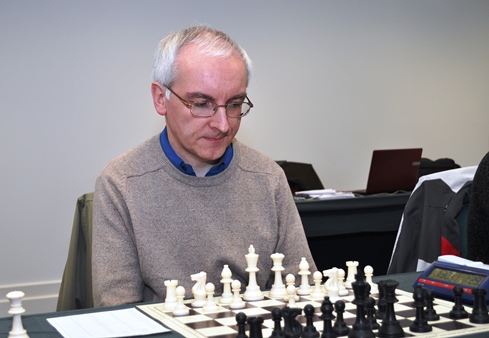 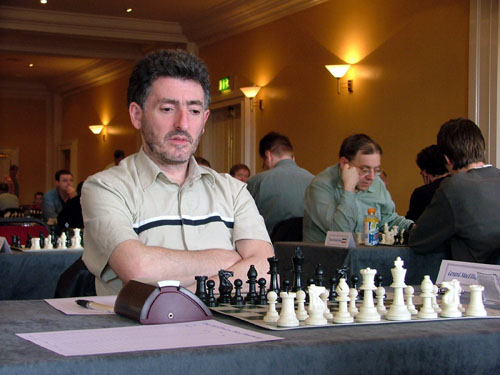 The 16th and last entrant for this year's event, Rudolf ensures there's a nice even number with few gaps from seed to seed. Like Conor O'Donnell, 2017 was a leaving cert year for Rudolf; and like Conor, that meant little or no change to their busy chess schedules as both played events right up until May (including the Inaugural UCD Blitz on May 25th). The highlight of his year was probably the Isle of Man Masters 2016 where Rudolf took down 2 FMs and brought home 146 FIDE points. He also represented Ireland at the European Youth Championships 2016 and Trinity College in the European Club Cup 2016 while mixing in an impressive tied 4th finish in The City of Dublin Masters 2016. 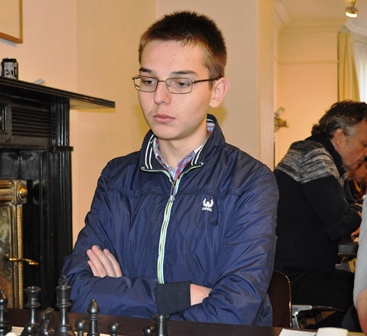 12th seed Shane Melaugh, pictured alongside 13th seed WFM Diana Mirza at the U16 Olympiad held last summer, will be returning for his second Irish Championships; having made his debut in the event last year. In 2016, Shane had a tough tournament but came out of it with wins over Rudolf Tirziman and CM Gerry McElligott and a draw with Kevin Butler - who finished the event in 4th place. 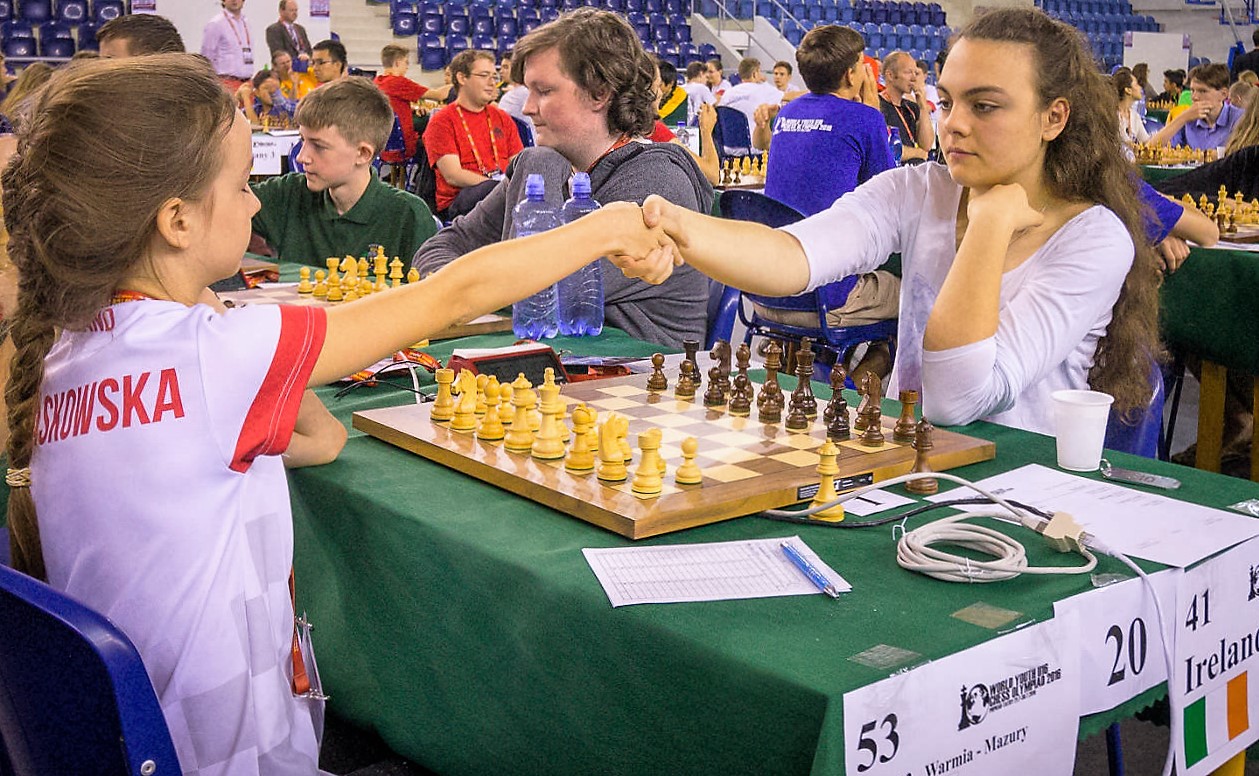 Where do you start with someone who just won a world title? Well, we'll start with her summer last year where Diana represented Ireland in a series of events. First up was the [ARL:611:World Youth U16 Chess Olympiad] which was followed by the European Youth Chess Championships and was then part of the Irish women's team which traveled to the 2016 Olympiad. Diana also played in her first Irish Championships last summer and finished above her seeding in joint 7th place.

Then came the world title itself in April and you can read all about that here as well as the plaudits she received from the likes of President Michael D Higgins and Garry Kasparov before receiving an award from the ICU which was presented by Judit Polgar. In winning the title, Diana also became eligible for the WFM title - which she then received, becoming Ireland's 5th WFM. 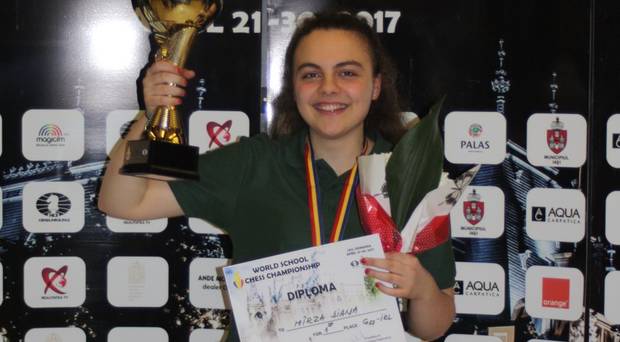 Gavin is our only debutante to this year's Irish Championships and although he has already been on the Irish chess scene for 10 years, he is still just 13 years old and therefore this year's youngest participant. Some of Gavin's highlights from the year include winning the City of Dublin Major section (alongside his brother Shane), a third place finish in the 3rd section of the Tralee Classic and helping Ireland to retain the Robinson Cup. 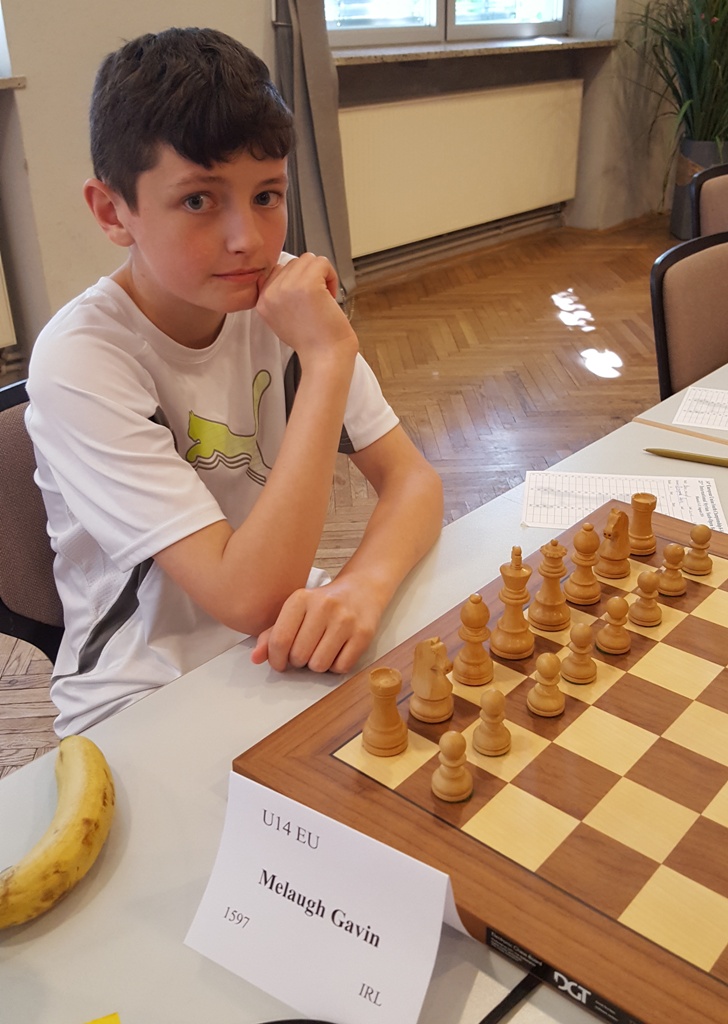 The last weekend of the 2016 Irish Championships

Irish Championship - A Round by Round review